'A Shakespearean Tragedy-in-the-Making.' Trump's Desperation for a North Korea Deal May Play Into Kim's Hand

If the first meeting was about making friends, the second summit between President Donald Trump and Kim Jong Un must now get down to business. The White House announced Jan. 19 that the President and the North Korean leader will sit down again before the end of February in an attempt to inject life into a stalled denuclearization process.

A location has not yet been confirmed but the smart money is on the Vietnamese capital Hanoi. The optics would seem to work for both sides: From the U.S. perspective, the authoritarian Southeast Asian powerhouse offers a political and economic model that Washington wouldn’t mind North Korea following.

For North Korea, Vietnam is an Asian nation riven during the Cold War but finally reunited by the Communist North’s crushing defeat of the American-backed South. Not to mention a former bitter foe of the U.S. that Washington is now desperately trying to forge better ties with to counterbalance rival superpower China.

Regarding denuclearization, Trump needs Kim to offer up something real. So far, he’s returned three American hostages, the remains of Korean War dead and destroyed an obsolete nuclear testing site. His nuclear and missiles programs, however, continue unabated.

At the very least, Washington needs a full inventory of North Korea’s ballistic missiles and nuclear, biological and chemical weapons arsenals and facilities. Ideally, the next step would then be returning International Atomic Energy Agency inspectors to those declared sites and agreeing on a firm dismantlement schedule in exchange for a phased rollback of U.N. sanctions.

“Any substantive agreement must be implemented on an ‘action for action’ basis with verification instead of illusory concessions,” says Sung-Yoon Lee, professor of Korean Studies at The Fletcher School at Tufts University.

But Kim may have bigger dreams than simply slackening the economic noose. After all, sanctions enforcement by China—across whose 880-mile shared border virtually all North Korean trade passes—has already crumbled amid Kim’s warming relations with Chinese President Xi Jinping, and Trump’s trade war.

Moreover, sanctions relief was always a double-edged sword for Kim. Boosting the livelihoods of his people would entail opening up North Korean society to a degree that risks unrest. He will be acutely aware of the East German example, where liberalizing reforms gave rise to mass protests and eventual absorption by democratic West Germany. Kim would much rather be Vietnam.

Therein likely lies his desire for a peace deal to formally end the 1950-53 Korean War. This would undercut the justification for the U.S. forces based in South Korea and Japan, which host 28,500 and 50,000 American troops respectively, leaving the South exposed. “The danger of war, paradoxically, spikes by signing on to a pleasant-sounding peace agreement,” says Lee.

Sean King, a former U.S. diplomat and now senior vice-president of political risk firm Park Strategies, suspects Kim will offer to dismantle his ICBMs, which can theoretically hit the continental U.S., in return for Trump removing regional strategic assets and troops. In May, Trump reportedly ordered the Pentagon to prepare options for drawing down U.S. troops in South Korea.

“Trump’s already said he wants U.S. troops out of South Korea, so why wouldn’t he jump at such an opportunity?” adds King. “Trump can thus redefine successful denuclearization as having secured the U.S. homeland.”

Already, Trump agreed at his first summit with Kim in Singapore in June to suspend joint South Korea-U.S. military drills, which was a red line for all previous administrations. And his travails at home—with the U.S. government shutdown over funding his proposed border wall a month old, and no breakthrough in trade negotiations with China in sight—may make the self-styled master dealmaker keener to secure a deal, any deal, at whatever cost.

What does this mean for South Korea? Worst case scenario is that it’s left exposed and isolated by the U.S. with a fanatical foe just miles away. Yup, Vietnam may be the perfect place for Trump-Kim 2.0. Adds Lee: “Act two of a Shakespearean tragedy-in-the-making opens next month in Hanoi.” 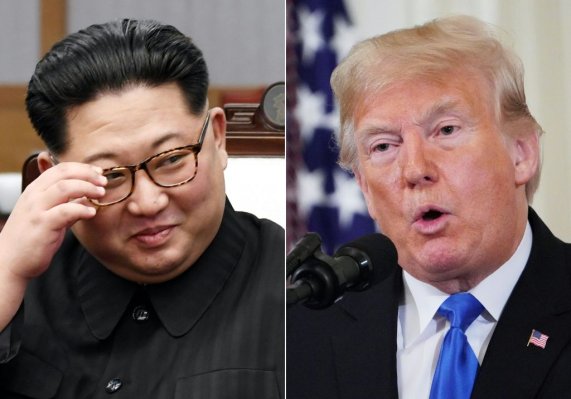 Trump, Kim Jong Un Expected to Meet in Vietnam in February
Next Up: Editor's Pick