A Kentucky Catholic high school is considering expelling students who were captured in viral videos taunting a Native American veteran on Friday.

In the videos, a large group of teenage boys – including several wearing Covington Catholic High School sweatshirts – are seen chanting and surrounding a small group of Native Americans, who were attending the Indigenous Peoples March in Washington, D.C. One of the boys, wearing a red “Make America Great Again” hat, smirks and stands close to an elderly Native American man, who was later identified as Vietnam veteran Nathan Phillips.

The videos have sparked widespread outrage online, with many comparing the boys’ actions to the behavior of opponents to school integration during the 1960s.

Covington Catholic High School and the Diocese of Covington released a joint statement Saturday, saying that they “condemn the actions” of the students and apologize to Philips.

“This behavior is opposed to the Church’s teachings on the dignity and respect of the human person,” the statement said. “The matter is being investigated and we will take appropriate action, up to and including expulsion.”

The statement also acknowledged that the students had been attending the pro-life March for Life in Washington, D.C.

“We know this incident also has tainted the entire witness of the March for Life and express our most sincere apologies to all those who attended the march and all those who support the pro-life movement,” the school and diocese wrote.

Philips later told MSBC that he was most concerned that chaperones from the school had not stepped in to get the boys under control.

“I don’t know about expulsions, but the chaperones should be immediately fired,” Philips said.

Philips also explained that he had decided to approach the boys when he saw that they were mobbing around a group of Black Israelites, and that other Native American protesters had heard the boys repeatedly saying rude things about the Indigenous Peoples March.

“It looked like it needed just one little spark, and that mob would have descended on those guys,” Philips said. 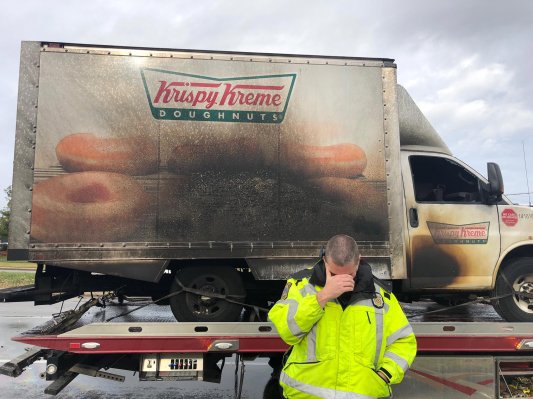 A Doughnut Truck Caught on Fire and Cops Have Intense Feelings About It
Next Up: Editor's Pick