In past presidencies, Jan. 19’s events might have seemed normal. President Donald Trump began his Saturday on a bitterly cold tarmac in Delaware, paying his respects to the remains of four Americans killed in Syria. He ended it staring into a teleprompter, offering to make a deal with Democrats in a broadcast announcement from the Diplomatic Reception Room on the ground floor of the White House.

But Trump has met the returning dead at Dover Air Force Base only once before, and he has spent the last month ad-libbing a stubborn face-off with House Speaker Nancy Pelosi amid a record-breaking government shutdown. So his reach for the traditional tools of the chief executive was jarring and, perhaps, significant. Exactly two years into his presidency, Trump faces his most precarious position yet, and in response, the former reality TV star seems to be trying to get real.

Trump’s mounting troubles span the globe now, from the battlefields of the Middle East to the border between the United States and Mexico to his own political base scattered throughout the U.S. He’s facing criticism for a sudden troop withdrawal in Syria and for muddling through the longest government shutdown on record with no identifiable planning for either self-made crisis. Special counsel Robert Mueller’s investigation continues apace. Another meeting with North Korean Leader Kim Jong Un looms with no signs of progress in the dangerous nuclear standoff despite prior administration concessions.

It was understandable, then, that Trump would turn to the trappings of a normal presidency. The remains of at least 40 Americans killed abroad have returned home through the Dover air base during Trump’s presidency, according to the Pentagon’s Defense Casualty Analysis System. Trump’s only prior visit to the Delaware base was in February 2017, when he met the family of slain Navy SEAL William “Ryan” Owens, who died in a special operations raid in Yemen.

This time, Trump met the remains of four Americans who died in a suicide bombing at a restaurant in Manbij in northern Syria earlier this week. The Department of Defense released three of the identities on Friday: Army Chief Warrant Officer 2 Jonathan R. Farmer, 37, of Boynton Beach, Fla.; Navy Chief Petty Officer Shannon M. Kent, 35, of upstate New York, and Scott A. Wirtz of St. Louis, Mo., a former Navy SEAL who was assigned to the Defense Intelligence Agency as an operations support specialist. The Atlanta Journal-Constitution later independently identified the fourth American killed as contractor Ghadir Taher, 27, who immigrated with her family to America from Syria.

The hulking C-17 military plane bearing the four flag-draped remains stood against the fleecy grey skies and towered over the comparatively petite Air Force One plane parked behind it at the base. At 12:15 pm, Trump, Secretary of State Mike Pompeo and Acting Secretary of Defense Patrick Shanahan walked with a group of high-ranking officers from the Army and Navy to the cavernous opening at the back of the plane.

Wirtz’s family had given journalists, including TIME, permission to attend what is known as the ‘dignified transfer’ of his remains, and as they and other service members looked on, Trump walked up the cargo ramp and disappeared inside the plane. During the roughly two minutes the party was inside, a chaplain said a prayer — “Amen” was the only word that could clearly be heard in the biting cold and wind outside the aircraft. As the group reemerged, Trump lost his footing on the ramp, jogging the rest of the way down to flat ground.

The four deaths have reignited questions about the timing and scale of Trump’s Syria drawdown. As Trump was headed to Delaware Saturday, across the world in Turkey, Republican South Carolina Sen. Lindsey Graham said, “I can understand the desire to withdraw, but withdrawal without a plan is chaos.”

“If you walk away, ISIS will come back and create a nightmare,” Graham, who is often an ally to Trump, added, according to the New York Times.

Trump didn’t address these or other criticisms of his approach to Syria on the short flight back from Dover. And when he appeared again later in the afternoon, it was to handle a different sort of crisis than Syria: the border wall and government shutdown.

A recent NPR/PBS NewsHour/Marist poll found that Trump’s approval rating has dropped and his disapproval has risen over the course of the past month during the government shutdown. He currently stands at 39 percent approval, 53 percent disapproval — a 7-point net change from December. That includes dropping a net of 10 points even among Republicans.

Speaking stiffly as he read a prepared text, Trump offered Democrats a deal. He said if they would provide him with $5.7 billion to fund border security and construction of a border barrier, he would grant three years of extended protection for Dreamers — undocumented immigrants brought to the country as children — and allow people whose temporary protected status (TPS) is about to expire to stay in the U.S. for three more years.

But if Trump is hoping his normal Saturday will extricate him from his multiple dilemmas, he seems likely to be disappointed. The president’s attempts to ensure regional players don’t exploit America’s departure from Syria for their own purposes have made little progress. And the fact that ISIS managed to kill four Americans in its worst ever attack on U.S. forces in Syria shows it remains a potent threat to American interests there and abroad.

At home, Trump’s offer shows no sign of nudging Democrats. Pelosi called Trump’s deal a “non-starter” and demanded a permanent solution for Dreamers and those with temporary protected status. Senate Majority Leader Chuck Schumer said, “It was the President who singled-handedly took away DACA and TPS protections in the first place — offering some protections back in exchange for the wall is not a compromise but more hostage taking.”

After Trump’s speech, Vice President Mike Pence told reporters gathered in his office that the President’s proposal was the result of the White House listening to Democrats and working with them. Pence said Trump was initially resistant to the idea, but was “persuaded” by Democrats that bringing DACA into the discussion “is the right thing to do for the country right now.”

Trump’s son-in-law and senior adviser Jared Kushner, who was also in Pence’s office, acknowledged that there’s “not a lot of trust between the sides on this issue.”

“The president feels like the country is tired of posturing on both sides,” Kushner said.

But if Trump is trying to get past the posturing that has defined his presidency so far to a more normal political reality, Saturday showed he has a way to go.

With Alana Abramson and W.J. Hennigan in Washington 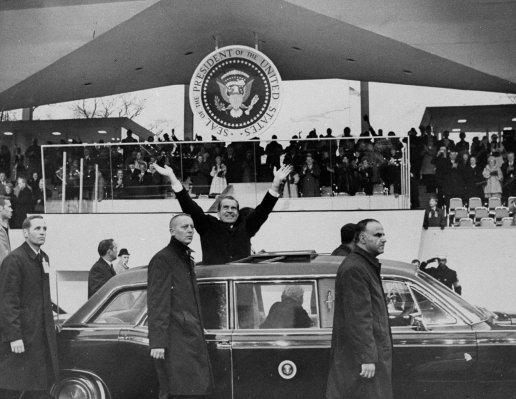 The Striking Contradictions of Richard Nixon's Inauguration 50 Years Ago, as Observed by Hunter S. Thompson
Next Up: Editor's Pick