President Donald Trump ripped yet another page from Cold War strategy books Thursday by directing the Pentagon to look into developing a constellation of space-based sensors and interceptors that could stop missiles before they reach the United States.

“We will de­stroy every type of mis­sile at­tack against any Amer­i­can tar­get, whether before or af­ter launch,” he told a crowd assembled inside the Pentagon auditorium. “When it comes to de­fend­ing Amer­ica, we will not take any chances. We will only take ac­tion.”

The need for new technologies, the President said, was necessary to deal with the growing size and sophistication of missile arsenals belonging to hostile states, such as Iran, North Korea, Russia and China. In addition, he out­lined plans to install 20 additional ground-based inter­cep­tor mis­siles at Fort Greely, Alaska, a decision that was previously announced.

Coming at the same time that Trump has criticized and pulled back from treaties aimed at reducing nuclear weapons stockpiles, the push for a space-based missile defense will likely lead other countries to develop newer and stealthier weapons, experts warn, possibly leading to an arms race between the U.S., China and Russia.

The moves are part of several ambitious policy objectives laid out in the Trump Administration’s Missile Defense Review, a 108-page strategy document released Thursday. “Our goal is simple: to ensure that we can detect and destroy any missile launched against the United States anywhere, any time, any place,” Trump said.

The President’s pledge, which could be perceived as a threat in foreign capitals, will almost certainly lead adversaries to focus on ways to prevent such American invincibility from ever becoming a reality. As a result, nuclear arms analysts say, other nations’ develop new weapons to circumvent U.S. defenses. It’s a cat-and-mouse game.

“When the U.S. builds bigger and better missile defense forces, it stimulates Russia to respond with bigger and better offensive forces,” said former Defense Secretary William Perry. “This could be a reasonable tradeoff, except the offense has an advantage: It is easier and cheaper to build the responding offensive forces. So rather than getting an increase in security, we get instead a costly arms race, and one that decreases, not increases, our security.”

It also requires billions of dollars to improve systems because they are so technologically complex. Since 1983, the United States has spent more than $290 billion on a variety of missile defense schemes, said Stephen I. Schwartz, a senior fellow with the non-profit Bulletin of the Atomic Scientists, who tracks nuclear spending.

“It is far easier and less expensive for adversaries to build and deploy additional offensive missiles and countermeasures than it is for us to devise and deploy sensors and interceptors to reliably track all those weapons and knock them out of the sky,” Schwartz said.

The main program today, known as Ground-based Midcourse Defense, relies on long-range interceptors, which are currently based in Alaska and California, to hit a ballistic missile as it travels at more than 14,000 mph in space. U.S. military officials often liken it to hitting a bullet with another bullet. It currently has a 50% success rate in tests.

Because there are just 44 interceptors, the U.S. maintains that the system is not geared toward nations with large arsenals of ballistic missiles, such as China or Russia. Rather, the program aims to knock out one or two missiles launched by a rogue nation, such as Iran or North Korea. But in his remarks on the review, Trump stated: “Regardless of the missile type or the geographic origins of the attack, we will ensure that enemy missiles find no sanctuary on Earth or in the skies above.”

The White House increased missile defense spending by 25% to about $10 billion this fiscal year. And it is clear from the new strategy, which is the first review undertaken by the U.S. government in a decade, that the Trump Administration has determined that missile defense is a critical national security priority.

The Administration wants to fund research on developing a space-based layer of sensors to give early warning by monitoring, detecting, and tracking missiles when they are launched from locations almost anywhere on the globe. It also wants to fund research on space-based interceptors. “Space-basing may increase the overall likelihood of successfully intercepting offensive missiles, reduce the number of U.S. defensive interceptors required to do so, and potentially destroy offensive missiles over the attacker’s territory rather than the targeted state,” according to the Missile Defense Review.

The vision harkens back to President Ronald Reagan’s Strategic Defense Initiative, known more commonly as Star Wars. The proposed missile defense system, which was first announced in 1983, was being developed to protect the U.S. homeland from ballistic missile attack by basing laser-shooting satellites in space. It was deemed to be highly destabilizing at the time, because it threatened to make intercontinental ballistic missiles obsolete. In the end, it didn’t matter because the system was too technologically complicated and couldn’t be built.

However, this isn’t the first time Trump has revisited a Cold War totem.

He has criticized the New Strategic Arms Reduction Treaty, or New START, which reduces and limits nuclear arms in the U.S. and Russia, as a bad deal. He has announced his intention to withdraw from the Intermediate-Range Nuclear Forces (INF) Treaty, a 31-year-old nuclear weapons agreement with Russia, delivering a severe blow to the arms control regime that helped preserve peace on the European continent.

Andrea Thompson, U.S. Under Secretary for Arms Control and International Security, said Wednesday that the chances for both treaties looked bleak after meeting with Russian officials in Geneva. Moscow refused to allow inspection of a missile system that Washington says violates INF. “We see no indication that Russia would choose compliance,” she said.

During the Cold War, a series of treaties between the U.S. and Soviet Union were designed to avoid miscalculation and keep communication channels open — even though Washington and Moscow were sworn adversaries. A number of those agreements have frayed in recent years but the last time that the U.S. unilaterally withdrew from a landmark nuclear arms control treaty was in 2002 when Washington left the Anti-Ballistic Missile Treaty and continued its expansion of ballistic missile defenses.

The effects of that decision was easily seen in March when Russian President Vladimir Putin unveiled his nation’s next generation of nuclear weapons, each engineered to slip behind America’s vast network of early warning and defense systems. In making the nationally televised speech to Russia’s Federal Assembly, Putin specifically stated the new arsenal serves as response to the U.S. government’s decision to abandon the Anti-Ballistic Missile Treaty.

“Both sides are citing the other’s missile defense deployments and plans as rationales to outfit their strategic nuclear arsenals with more capable weapons,” said Kingston Reif, director for disarmament and threat reduction policy at the Arms Control Association, a think tank. “Neither side is taking into account the concerns the other has about their offensive and defensive developments sufficiently seriously to avoid increased risks of instability.”

The calculation is further complicated by a report released Wednesday by the U.S. Defense Intelligence Agency, which said China is developing a range of cutting-edge weapons to counter U.S. and other countries’ ballistic missile defense systems, including a new generation of mobile missiles with warheads consisting of multiple independently targetable reentry vehicles.

If the U.S. builds up its anti-missile systems even further, as the Administration plans, it may set off an unintended domino effect. “An expansion of U.S. defenses could prompt Beijing to make additional qualitative and quantitative improvements to its arsenal,” Reif said. “Such an expansion would make it even more difficult to achieve further reductions to the U.S. and Russian nuclear arsenals.” 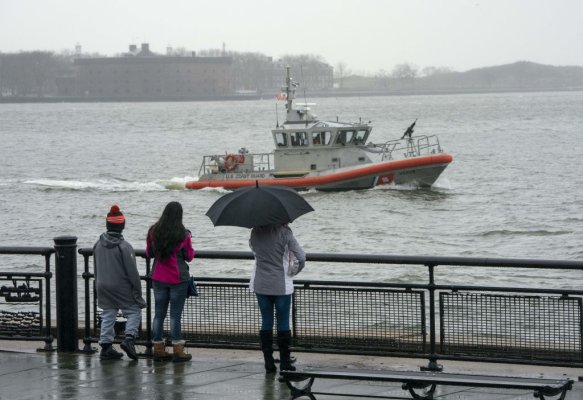 Here’s the Note Coast Guard Members Got on Their First-Ever Day Without Pay
Next Up: Editor's Pick