Cristiano Ronaldo of Juventus holds the Italian supercup trophy after the Italian Supercup match between Juventus and AC Milan at Ki. 16, 2019 in Jeddah, Saudi Arabia.
Claudio Villa—Getty Images for Lega Serie A
By Joseph Hincks

A headed goal from soccer superstar Cristiano Ronaldo propelled Juventus to 1–0 victory over rivals AC Milan in the Supercoppa Italiana (Italian Super Cup) Wednesday, but the reluctance of the sport’s top players and clubs to speak out against Saudi Arabia’s human rights abuses has prompted accusations they are complicit in ‘sportswashing’ for the Gulf state.

The $8 million that Saudi Arabia is paying for the right to hold each of three Supercoppa games it is scheduled to host over the next five years constitutes “the price of silence in the face of bombs which have been massacring civilians in Yemen for four years, in the face of the enlistment of child soldiers, in the face of the brutal murder [of Khashoggi],” RAI’s journalist union said in a statement issued a couple of days before kickoff. Highlighting the presence of male-only sections in the stadium and the incarceration of women activists, RAI’s union’s accused those involved of being accomplices to delivering “un calcio ai diritti umani” (a kick against human rights).

Serie A’s deal with Riyadh drew scant public opposition when it was announced last June. The Italian season’s traditional opener—now scheduled during its mid-winter break—had in the past been played in the U.S., China, Qatar and Libya. Its temporary home in Saudi Arabia was confirmed the same month reforms overseen by de-facto leader Crown Prince Mohammed bin Salman (nicknamed MSB) permitted women in the Kingdom to drive, and a year after they were allowed to attend live soccer games in stadiums for the first time.

But Khashoggi’s murder in Istanbul last year—which U.S. Senators say was ordered by the crown prince—largely put an end to Bin Salman’ efforts to cast himself as a reformer. The high-profile flight of Saudi teenager Rahaf Mohammed Alqunun this month prompted fresh scrutiny of the country’s male-dominated guardianship system, which curbs women’s ability to make critical decisions about their lives.

In addition to RAI’s and other unions staging a protest outside Saudi Arabia’s embassy in Rome, Wednesday’s match also drew criticism from Italian politicians and Amnesty international, who in October urged Juventus and A.C. Milan to pull out of the game.

“International sports events have become an established public diplomacy tool for Gulf countries to enhance their global stature and to deflect attention from political controversies and human rights abuses,” says Lina Khatib, head of the Middle East and North Africa program at London-based policy institute Chatham House. “But sometimes this strategy has backfired, instead drawing attention to issues the countries would like to sweep under the carpet.”

Read more: ‘Rahaf Is Going to Start a Revolution.’ Saudi Women Are Demanding Reforms After a Teen Fled the Country in Fear for Her Life

Italy’s top league is only the latest organization to be accused of assisting a Gulf state’s “sportswashing.” Soccer’s international governing body FIFA has failed to hold the Qatari government to account over what Human Rights Watch estimates could be more than 2,000 unexplained deaths of outdoor workers since FIFA awarded Qatar the right to host the 2022 World Cup, writes researcher Nicholas McGeehan. McGeehan has also criticized German club Bayern Munich for keeping quiet over human rights abuses allegedly perpetrated by its sponsor Qatar Airways.

Such organizations are “so hungry for cash and the Gulf States are so happy to hand it out at every turn that they have not been allies in trying to use sport as a tool for positive change or reform,” McGeehan tells TIME. It’s a damning indictment of organizations that frequently tout their commitment to fair play and inclusivity. But, McGeehan says, the game’s stars are “probably among the most powerful actors” to affect change.

In a statement Serie A president Gaetano Micciche said the league was working to ensure women would be able to access all areas of the stadium’s seats for subsequent Supercoppa fixtures. But analysts say the negligible criticism from soccer’s luminaries illustrates how Saudi Arabia is so far withstanding public pressure, bolstered by international business and political interests overriding concern for human rights.

“Football is part of the Italian economic and cultural system, and can’t have logic, especially in international relations, different from those of the country to which it belongs,” Micciche said in a statement defending the decision to proceed with the match. “Saudi Arabia is the largest Italian commercial partner in the Middle East thanks to dozens of important Italian companies that export and operate there, with many of our compatriots working Saudi Arabia, and none of these relations have been disrupted.” 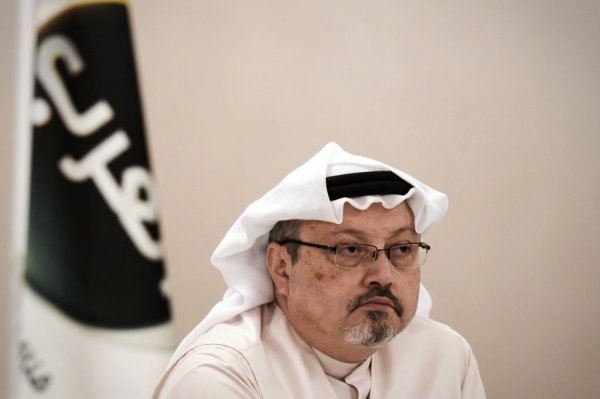 During a Jamal Khashoggi Event, Participants Were Asked to Steer Clear of Saudi Arabia. One Didn't
Next Up: Editor's Pick