King delivering his speech “Beyond Vietnam” at New York City’s Riverside Church in 1967
John C. Goodwin
Ideas
By Viet Thanh Nguyen
Viet Thanh Nguyen was born in Vietnam and raised in America. His novel The Sympathizer won the 2016 Pulitzer Prize for Fiction, as well as five other awards. His new novel The Committed is out March 3.

Most Americans remember Martin Luther King Jr. for his dream of what this country could be, a nation where his children would “not be judged by the color of their skin but by the content of their character.” While those words from 1963 are necessary, his speech “Beyond Vietnam,” from 1967, is actually the more insightful one.

It is also a much more dangerous and disturbing speech, which is why far fewer Americans have heard of it. And yet it is the speech that we needed to hear then–and need to hear today.

In 1963, many in the U.S. had only just begun to be aware of events in Vietnam. By 1967, the war was near its peak, with about 500,000 American soldiers in Vietnam. The U.S. would drop more explosives on Vietnam, Laos and Cambodia than it did on all of Europe during World War II, and the news brought vivid images depicting the carnage inflicted on Southeast Asian civilians, hundreds of thousands of whom would die. It was in this context that King called the U.S. “the greatest purveyor of violence in the world today.”

Many of King’s civil rights allies discouraged him from going public with his antiwar views, believing that he should prioritize the somewhat less controversial domestic concerns of African Americans and the poor. But for King, standing against racial and economic inequality also demanded a recognition that those problems were inseparable from the military-industrial complex and capitalism itself. King saw “the war as an enemy of the poor,” as young black men were sent to “guarantee liberties in Southeast Asia which they had not found in southwest Georgia and East Harlem.”

What King understood was that the war was destroying not only the character of the U.S. but also the character of its soldiers. Ironically, it also managed to create a kind of American racial equality in Vietnam, as black and white soldiers stood “in brutal solidarity” against the Vietnamese. But if they were fighting what King saw as an unjust war, then they, too, were perpetrators of injustice, even if they were victims of it at home. For American civilians, the uncomfortable reality was that the immorality of an unjust war corrupted the entire country. “If America’s soul becomes totally poisoned,” King said, “part of the autopsy must read Vietnam.”

In his speech, which he delivered exactly one year to the day before he was assassinated, King foresaw how the war implied something larger about the nation. It was, he said, “but a symptom of a far deeper malady within the American spirit, and if we ignore this sobering reality … we will find ourselves organizing ‘clergy and laymen concerned’ committees for the next generation … unless there is a significant and profound change in American life.”

King’s prophecy connects the war in Vietnam with our forever wars today, spread across multiple countries and continents, waged without end from global military bases numbering around 800. Some of the strategy for our forever war comes directly from lessons that the American military learned in Vietnam: drone strikes instead of mass bombing; volunteer soldiers instead of draftees; censorship of gruesome images from the battlefronts; and encouraging the reverence of soldiers.

You can draw a line from the mantras of “thank you for your service” and “support our troops” to American civilian regret about not having supported American troops during the war in Vietnam. This sentimental hero worship actually serves civilians as much as the military. If our soldiers can be absolved of any unjust taint, then the public who support them is absolved too. Standing in solidarity with our multicultural, diverse military prevents us from seeing what they might be doing to other people overseas and insulates us from the most dangerous part about King’s speech: a sense of moral outrage that was not limited by the borders of nation, class or race but sought to transcend them.

What made King truly radical was his desire to act on this empathy for people not like himself, neither black nor American. For him, there was “no meaningful solution” to the war without taking into account Vietnamese people, who were “the voiceless ones.” Recognizing their suffering from far away, King connected it with the intimate suffering of African Americans at home. The African-American struggle to liberate black people found a corollary in the struggle of Vietnamese people against foreign domination. It was therefore a bitter irony that African Americans might be used to suppress the freedom of others, to participate in, as King put it, “the role our nation has taken, the role of those who make peaceful revolution impossible by refusing to give up the privileges and the pleasures that come from the immense profits of overseas investments.”

Americans prefer to see our wars as exercises in protecting and expanding freedom and democracy. To suggest that we might be fighting for capitalism is too disturbing for many Americans. But King said “that if we are to get on the right side of the world revolution, we … must undergo a radical revolution of values. We must rapidly begin … the shift from a thing-oriented society to a person-oriented society.” Those words, and their threat to the powerful, still apply today. For the powerful, the only thing more frightening than one revolution is when multiple revolutions find common cause.

The revolution that King called for is still unrealized, while the “giant triplets of racism, extreme materialism and militarism” are still working in brutal, efficient solidarity. He overlooked how misogyny was also an evil, but perhaps, if he had lived, he would have learned from his own philosophy about connecting what seems unconnected, about recognizing those who are unrecognized. Too many of today’s politicians, pundits and activists are satisfied with relying on one-dimensional solutions, arguing that class-based solutions alone can solve economic inequality, or that identity-based approaches are enough to alleviate racial inequality.

King argued for an ever expanding moral solidarity that would include those we think of as the enemy: “Here is the true meaning and value of compassion and nonviolence, when it helps us to see the enemy’s point of view … For from his view we may indeed see the basic weaknesses of our own condition, and if we are mature, we may learn and grow and profit from the wisdom of the brothers who are called the opposition.”

This was the dream of King’s that I prefer–the vision of a difficult and ever expanding kinship, extending not only to those whom we consider near and dear, but also to the far and the feared.

Nguyen is the Pulitzer Prize–winning author of The Sympathizer. His latest collection is The Refugees 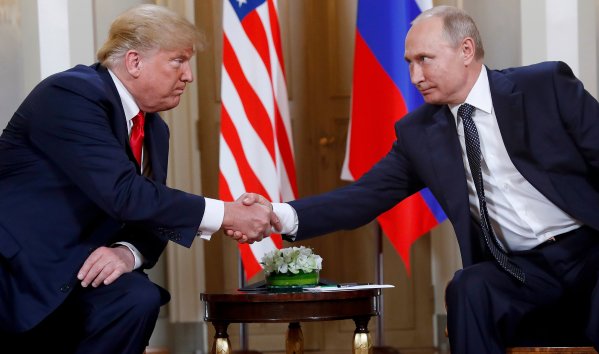 The Likely New Year’s Resolutions of World Leaders in 2019
Next Up: Editor's Pick