Two principles have defined William Barr’s 42-year legal career: adherence to law and order, and dogged defense of a powerful presidency. The question hanging over the Senate hearings beginning on Jan. 15 on Barr’s nomination to be the next Attorney General was how the plainspoken Washington lawyer would reconcile those twin pillars of his professional philosophy if they came into conflict.

If confirmed, Barr would take the job under extraordinary circumstances, with multiple Justice Department investigations swirling close to President Donald Trump. Special counsel Robert Mueller’s probe into possible collusion between Trump’s 2016 campaign and Russia–and whether the President obstructed that investigation–is ongoing. The Justice Department’s Manhattan office is looking at potential campaign finance violations in Trump’s hush-money payments to women alleging affairs. And the New York Times reported on Jan. 11 that the FBI’s counterintelligence division opened a probe in May 2017 into whether Trump was acting as a foreign agent for Russia. All of those investigations would answer to Barr, who may ultimately be forced to reckon with the question of what to do if the evidence indicates a sitting President has broken the law.

That in turn could place Barr, 68, at the center of an unprecedented test for the Constitution and American democracy. Barr, who previously served as Attorney General under President George H.W. Bush, made one thing clear during his testimony before the Senate Judiciary Committee: If confirmed, he’ll be the one making the final call. “I’m in a position in life where I can do the right thing and not really care about the consequences,” Barr said at his hearing. “I will not be bullied into doing anything I think is wrong.”

‘I don’t believe Mr. Mueller would be involved in a witch hunt.’ William Barr, Trump’s nominee for Attorney General, testifying before the Senate Judiciary Committee on Jan. 15
Andrew Harnik—AP

That confidence comes from being in the twilight of a career that included close interaction with Mueller. When Barr was Attorney General from 1991 to 1993, Mueller served under him as head of the DOJ’s criminal division. Barr described them at his hearing as “good friends” and said Mueller is “absolutely” fair-minded. “I don’t believe Mr. Mueller would be involved in a witch hunt,” Barr said, invoking Trump’s criticism of Mueller’s work.

On the surface, Barr’s robust support for Mueller seemed to spell trouble for Trump, who has demanded a quick, quiet end to the investigation. Barr promised that Mueller would be allowed to finish under his leadership. And he said Mueller’s final report–which according to DOJ guidelines will be submitted to the Attorney General first–should also be widely released. “My objective and goal,” Barr said, “is to get as much of the information as I can to Congress and the public.”

But there were subtle signs that Barr’s adherence to the rules, and his defense of the presidency, might end up protecting Trump. Barr acknowledged that the information shared with Congress could be limited by existing Justice Department regulations, especially if Mueller declines to prosecute the President. Barr also said he believes a sitting President cannot be indicted. “For 40 years the position of the Executive Branch has been you can’t indict a sitting President,” Barr said, adding that he had not read the DOJ opinions in some time but saw “no reason to change them.”

Taken together, those two positions could curtail what the public learns about Trump’s involvement in any of the matters under investigation. Some Trump allies liked what they heard. “He gave deference [to investigators] where he should have,” says Victoria Toensing, a Washington lawyer who once discussed the possibility of joining Trump’s legal team. “But he also would not give up or acquiesce, as [former Attorney General] Jeff Sessions did.”

Beyond the investigations, Barr sketched an expansive view of executive power and thoughts on other key issues that could shape many areas of American life. He said he supports a physical barrier along the southern border and that, though he has some misgivings about harsh drug-sentencing rules he formerly championed, “overall” the system treats black and white people equally. Barr also said he thinks Congress should pass a federal law barring recreational marijuana nationwide but would not roll back legalization experiments already under way across the U.S. In total, his testimony heartened the White House and increased the likelihood that Barr–who requires 50 votes for confirmation–would be approved for the job by the Republican-controlled Senate.

If he is, all signs point to his playing a crucial role well beyond the Mueller probe, however it turns out. Even if Barr never faces the hardest question–what to do if Mueller finds Trump committed crimes–as Attorney General he could help determine the outcome of the multiple congressional investigations launched by Democrat-controlled House committees. Barr would control how much of Mueller’s evidence Congress sees, which could provide the basis for impeachment proceedings. Which is why the fate of Trump’s presidency might rest with William Barr. 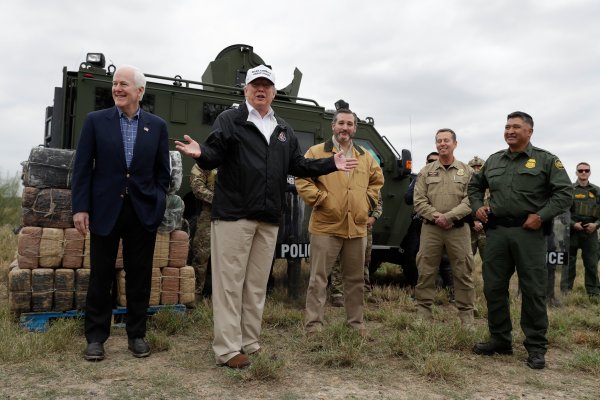 Trump May Have Trouble Proving His Case for a 'National Emergency'
Next Up: Editor's Pick