‘She Knows How to Play Their Game.’ Regina Hall on Playing a Woman in a Man’s World on Black Monday

The actor, 48, recently won Best Actress at the New York Film Critics Circle Awards for her role in the indie comedy Support the Girls, becoming the first black woman ever to win. In the movie, she plays the manager of a Hooters-like restaurant in which she tries to protect her employees from customers’ casual sexism. In the new 1980s-set Showtime drama Black Monday, Hall battles sexism in a very different kind of workplace. As Dawn, she’s the lone woman at a Wall Street trading firm in the lead-up to the massive stock market crash of Oct. 19, 1987.

What are the challenges for Dawn, the only woman in her workplace?

I think the challenge is to be heard and to be respected, to be treated equally and paid equally for the work that she’s done. Obviously Mo [her boss, played by Don Cheadle] is aware of her gifts. But to be aware is one thing. To be demonstrative of your awareness in terms of how you pay someone and how you value them is another.

The writers could have made her a mother figure in the office but clearly chose not to.

That was one of the things I loved. She wasn’t going to be the one woman like, “Come on, guys, settle down.” You sense that she’s the smartest, but she doesn’t want to be the Debbie Downer. She has to toe the line of being one of the guys so they don’t dismiss her as a sourpuss but still be respected as a woman.

In Support the Girls, your character works in an all-female environment, but she deals with sexism from her boss and the customers.

Absolutely. In both circumstances, these women have to choose their battles. They can’t take every comment as offensive, but they have to stand up for themselves when a line is crossed. I think Dawn is very smart about it because she is aware of all the comments, like “Get me coffee,” and then, “I want cream in my coffee,” and the sexual innuendo. But she knows how to play their game. She can go toe to toe.

There’s a moment in the show in which a screenwriter steals aspects of Dawn’s life to put into the movie Working Girl, essentially whitewashing her story. As you said, Wall Street is mostly white and male, but not exclusively. It feels like this show is trying to correct the record.

This show is about the world of outsiders. You have black characters, an Arab character and a gay character. They’re all working at this one firm trying to prove what they can do. There’s really only one guy who is a traditional Wall Street guy–a white man from Wharton with connections. The writers take those references that we all know and flip them on their heads. That’s what makes this world so interesting. 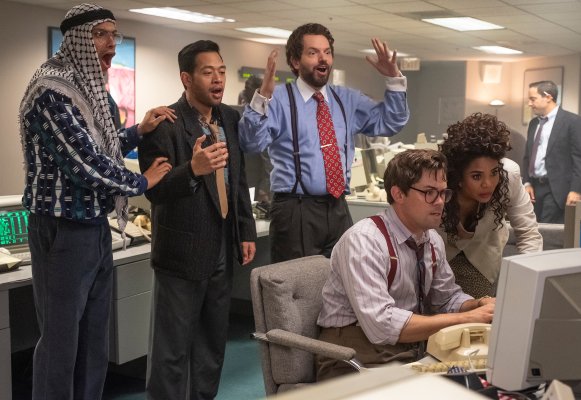 Black Monday and Corporate Are Leading a New Wave of Anticapitalist TV
Next Up: Editor's Pick