President Donald Trump delivers his State of the Union address to a joint session of Congress on Capitol Hill in Washington, on Jan. 30, 2018.
Susan Walsh—AP
By Tara Law

When House Speaker Nancy Pelosi asked President Trump on Wednesday to postpone the State of the Union address, she gave him two options – reschedule the speech, or send it to Congress in a letter.

Pelosi’s letter argued that the speech raised safety concerns because many members of the Secret Service and the Department of Homeland Security, which handle security for the event, are furloughed due to the partial government shutdown. She noted that a State of the Union address has never before been held during a government shutdown.

Pelosi’s suggestion for a written State of the Union might seem strange to many Americans, but in fact, the U.S. went without a presidential address to a joint session of Congress for 112 years.

The first reference to a “State of the Union” address is in the Constitution. The document states that the president can “from time to time give to the Congress information of the state of the union, and recommend to their consideration such measures as he shall judge necessary and expedient.”

The constitution does not say whether or not this information would need to be given aloud, nor how often. It was President George Washington who first interpreted this to be a speech to a joint session of Congress, which was known as the “President’s Address” and President John Adams followed his lead.

President Thomas Jefferson, however, had a very different vision of presidential power – as well as the President’s Address. Jefferson was against strong federal power (and strong presidential power), and thought that the speech seemed to be too regal. He wrote a letter to Congress explaining that he had decided to do without the speech because it was inconvenient, took too long to read, and made it difficult for legislators to respond.

Presidents delivered their addresses to Congress as a letter for 112 years – until President Woodrow Wilson decided to once again deliver it as a speech in December 1913.

At the time, many lawmakers were shocked by Wilson’s decision. “All official Washington was agape last night over the decision of the President to go back to the long-abandoned custom,” the Washington Post wrote at the time.

The address was also the first of its kind to be overtly political. Wilson discussed several bills that he was trying to pass, including a measure for mining industry reform.

Some lawmakers didn’t believe the the President was serious about the address until the President’s secretary, Joseph Patrick Tumulty, told them that it was true. “The President regarded the practice as a dignified way of bringing out a closer intimacy between Congress and the executive,” the Post said.

When some lawmakers said that they were concerned that they’d have to sit through a speech every year, Tumulty consoled them by saying that “the President did not intend the practice to become a habit.”

Throughout the 20th Century, Presidents continued to sometimes skip the in-person speech, which became known as the “State of the Union” in 1947. Wilson himself skipped the address in 1919 and 1920, and Calvin Coolidge only gave one State of the Union speech.

As time went on, presidents began to skip the address less and less. The last president to skip the in-person speech was Jimmy Carter in 1981. Fortunately for Congress, that speech was also the longest in history, going on for 33,667 words. 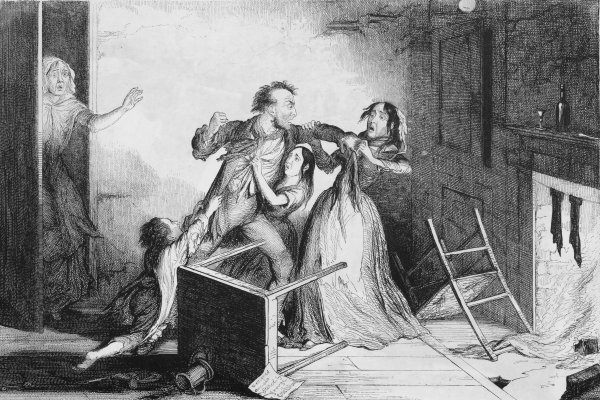 The Surprisingly Complex Link Between Prohibition and Women’s Rights
Next Up: Editor's Pick