What Martin Luther King Jr. Said About Walls During His 1964 Visit to Berlin

Martin Luther King in Berlin on Sept. 12, 1964.
PhotoQuest—Getty Images
By Olivia B. Waxman

Berlin was perhaps destined to be a meaningful place for Martin Luther King Jr.; it was the city that, in some ways, gave him his name. And for a man who preached against walls that “divided humanity,” a 1964 visit to the then-three-year-old Berlin Wall, which divided the Soviet-occupied East side of the city and the U.S.-occupied West side of the city, offered a chance to add another layer to that significance.

The visit came about after West Berlin’s Mayor Willy Brandt invited King to participate in a memorial ceremony for President John F. Kennedy, who had been assassinated the year prior, less than six months after his own famous visit there. King also received an invitation to speak in East Berlin from Heinrich Grüber, who had been a pastor at a church there and a prisoner in a concentration camp for three years during World War II for openly criticizing the Nazi Party.

It would be risky for King, as Grüber had been driven out because of his anti-government views, and had been living in West Berlin himself. “I write in the bond of the same faith and hope, knowing your experiences are the same as ours were,” he wrote in a letter to King, according to historian Britta Waldschmidt-Nelson’s account of the visit. “During the time of Hitler, I was often ashamed of being a German, as today I am ashamed of being white,” Grüber wrote. “I am grateful to you, dear brother, and to all who stand with you in this fight for justice, which you are conducting in the spirit of Jesus Christ.”

King decided to take that risk and accepted both invitations.

On Sept. 13, 1964 — two months after the Civil Rights Act was enacted and a month before he won the Nobel Peace Prize — King addressed 20,000 people at a rally at the outdoor stadium Waldbühne in West Berlin. He also visited the spot where, earlier that day, East Berlin guards had shot and wounded a resident who was trying to climb over the wall into West Berlin. King also delivered the same sermon at St. Mary’s Church in East Berlin, which was over its 2,000-person capacity, and then gave another, unscheduled speech to the overflow crowd at Sophia Church, similarly over its 2,000-person capacity.

And, in a city with a division that could not be avoided, he said that, while he was no expert in German politics, he knew about walls.

“It is indeed an honor to be in this city, which stands as a symbol of the divisions of men on the face of the earth,” he told East Berliners. “For here on either side of the wall are God’s children and no man-made barrier can obliterate that fact. Whether it be East or West, men and women search for meaning, hope for fulfillment, yearn for faith in something beyond themselves, and cry desperately for love and community to support them in this pilgrim journey.”

He talked about the similarities shared by the clash between African Americans and white people in the United States and that between communism and democracy in Berlin, which he described as “the hub around which turns the wheel of history.” Just as America is “proving to be the testing ground of races living together in spite of their differences: you are testing the possibility of co-existence for the two ideologies which now compete for world dominance,” he said. Quoting Ephesians, he spoke of his assumption that “wherever reconciliation is taking place, wherever men are ‘breaking down the dividing walls of hostility’ which separate them from their brothers, there Christ continues to perform his ministry of reconciliation.”

The sermon was “particularly moving” to East Berliners, especially “his passages on the readiness of Negroes to suffer and if necessary die for their faith and his emphasis on common struggles, common faith, and common suffering,” according to a telegram rundown of King’s trip that the U.S. Mission in Berlin sent to the Secretary of State’s office, European embassies and the Moscow embassy.

The U.S. State Department nervously monitored the visit, worried about anything that would heat up the Cold War or undermine its agenda to prove democracy was the better system of government.

“King is determined to cross the wall and see East Berlin, and it’s very clear, at this point, that the U.S. embassy does not want him to do this. They do not want the press,” historian Michael P. Steinberg has explained. Officials were particularly concerned as racial violence in the United States was frequently held up within East Germany and the Soviet Union as “an indication of the failure of American society.” If King drew attention to those conflicts, they worried, it could be bad news for the American agenda.

The embassy confiscated King’s U.S. passport upon his arrival on Sept. 12, hoping it would deter him from crossing into East Berlin, but he managed to get in just by flashing his American Express card. As the detailed official telegram described, local media eagerly covered the sermons and the press conference held shortly after he arrived. (Asked about the upcoming U.S. presidential election, the preacher of non-violent resistance warned that African Americans would revolt violently if Republican nominee Barry Goldwater won.) German scholars have written that the visit was key not only to raising Germans’ awareness of the American civil-rights struggle, but also to sowing the seeds of non-violent resistance there. Some say it inspired participants in the Prague Spring four years later, and those who campaigned for the Berlin Wall to be torn down in 1989. Waldschmidt-Nelson points out that East German opposition movements marched to “We Shall Overcome” in the 1980s.

The visit was enlightening for King, too. “The past few days here in Europe have brought me face to face with the most powerful ally that the Negro struggle made,” King wrote on Sept. 17, referring to the impact of global public opinion. “Amazed at the knowledge which one finds of the United States racial situation here in Europe” and feeling like “the world is in sympathy with the Negro,” he saw that the racial inequality issues in the U.S. had seen “the light of world exposure.”

In the U.S. however, the visit didn’t get much media attention. (TIME didn’t cover it.)

“King was not the media figure he became after getting the Nobel Prize, I think particularly with respect to foreign issues. Going to Berlin was not expected of him,” explains historian Clayborne Carson, and Director of the Martin Luther King, Jr. Research and Education Institute. But in Berlin, “It was a big deal. It was major. In fact some people compared it to Kennedy’s visit to Berlin.”

Carson points out that the message King preached to those Berliners who were so moved was not a new one. In a 1953 sermon, for example, he’d urged the audience to “transcend the narrow confines of nationalism.” The Berlin Wall was a vivid and literal example of those confines, but the world was full of metaphorical walls and King had long advocated for tearing them down.

“I think that that message has greater relevance today than it even had at the time when he was alive,” says Carson, speaking as a partial government shutdown prompted by debate over the construction of a border wall continues into Martin Luther King Jr. Day weekend. “It seems like nationalistic sentiments are overwhelming our sense that we’re all in this together, in terms of humanity, particularly with issues like war, the environment, climate change, poverty. They’re not going to be solved in one country. They always are related.” 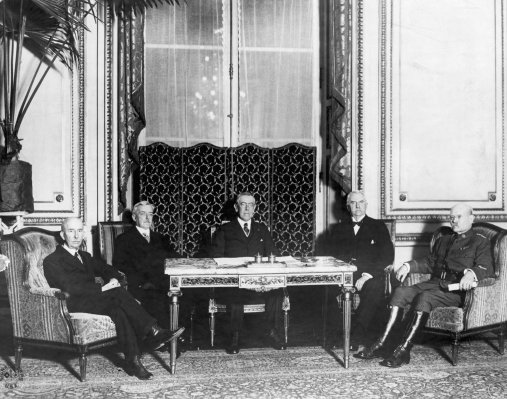 The Challenges America Faced at Versailles in 1919 Are the Same the U.S. Faces Today
Next Up: Editor's Pick