An explosion on a bustling downtown street killed four Americans during a routine foot patrol inside the Syrian city of Manbij, U.S. military officials said on Wednesday.

The blast claimed the lives of two U.S. servicemembers, one civilian Defense Department employee and one military contractor, according to U.S. Central Command, the military headquarters that oversees all operations in the Middle East. Three other servicemembers were injured.

ISIS militants claimed a suicide bomber was responsible for the attack, which also killed a number of civilians.

”Initial reports indicate an explosion caused the casualties, and the incident is under investigation,” the U.S. military said in a statement.

The names of the servicemembers killed-in-action are being withheld until 24 hours after their families are notified in accordance with a long-standing Pentagon policy.

The attack marks the deadliest day for American forces operating in Syria since the Obama Administration began deploying U.S. Special Operations commandos in November 2015. Until Wednesday, only four other U.S. service members died there while assisting Syrian rebel forces in the fight against ISIS.

The incident comes less than one month after President Donald Trump unexpectedly announced he would withdraw all American forces from the war-ravaged country.

The deadly blast throws harsh light on the perilous security situation in Syria that continues to have worldwide implications. Although ISIS is no longer in control of any major city in Iraq or Syria, the fighting is not over completely. The U.S.-led military coalition continues to fight the remaining ISIS fighters hiding in cells or holed up in a stretch of desert straddling the Iraq-Syria border.

The suicide attack in Manbij is just the latest hard truth assessment on how the U.S. remains locked in a brutal fight against a formidable enemy, despite the Trump Administration’s pronouncements that ISIS’ reign of terror is all but over.

”We have crushed the ISIS caliphate and devastated its capabilities,” Vice President Mike Pence said in a statement after claiming the group “has been defeated.”

U.S. and allied warplanes and artillery pieces launched 575 strikes against the group in Syria between Dec. 30 and Jan. 12. ISIS targets were hit with 469 strikes over the prior two-week period, according to coalition data.

The daily barrage blows up the argument that the U.S. mission against the militant group is done or close to completed. National security officials and analysts have criticized the decision to pull-out as politically motivated, rather than based on the situation on the ground.

Indeed, American interests are still deeply entangled in Syria. Operating from a half-dozen bases in the northeast part of the country, American advisers have steadily built up the Syrian partners by training and arming them.

Gen. Joseph Dunford, the Chairman of the Joint Chiefs of Staff, said Dec. 6 that U.S. troops and allies had trained just 20% of 40,000 local forces needed to deter ISIS from making a comeback. “With regard to stabilization, we have a long way to go,” he said.

American Special Operations forces inside Syria coordinate daily with local opposition fighters called the Syrian Democratic Forces, an alliance of mostly Kurdish and Arab fighters. The Kurds have been critical to the U.S. efforts to coordinate among dozens of armed groups that were trying to overthrow the government of President Bashar Assad, fight ISIS and battle one another all at the same time.

Since the U.S. began launching military operations in mid-2014 in Iraq and Syria, ISIS has lost roughly 99% of its territory, but it still poses a security threat. Not only has the group expanded and established cells around the world, it routinely mounts attacks in both Iraq and Syria. In August, the Pentagon published an inspector general report which said the U.S. military estimates that ISIS has as many as 30,000 fighters in Iraq and Syria. A United Nations report published that same month made a similar assessment.

The explosion on Wednesday occurred at a restaurant in Manbij, a strategic northeastern border town near Turkey that ISIS has used to move fighters and supplies in and out of Syria. It has been held for more than two years by Kurdish forces supported by United States.

Videos posted to social media showed a fireball engulfing a street packed with a crowd of people. Other images showed the aftermath of rubble mixed with blood and a silver helicopter flying overhead. The ISIS-affiliated Amaq news agency said a suicide bomber with an explosive vest carried out the attack.

The Britain-based Syrian Observatory for Human Rights said 16 people were killed, including two members of the U.S.-backed military coalition.

White House Press Secretary Sarah Sanders said Trump had been “fully briefed and we will continue to monitor the ongoing situation in Syria.”

The U.S. began the process of pulling out last week, when it hauled vehicles and equipment from northeast Syria into neighboring Iraq. No timeline has been publicly discussed as to when the withdrawal of all 2,000 American forces will be completed, but military officials expect it to be out by spring.

When Trump announced his decision to pullout, it sent shockwaves through Washington and the rest of the world. “Our boys, our young women, our men, they’re all coming back and they’re coming back now. We won,” he said in a video posted on Twitter.

The ensuing chaos led to the high-profile resignations of Defense Secretary James Mattis and Brett McGurk, the State Department’s special envoy to the coalition fighting ISIS. “The recent decision by the president came as a shock and was a complete reversal of policy that was articulated to us,” McGurk wrote in an email to colleagues obtained by the New York Times. “It left our coalition partners confused and our fighting partners bewildered.”

The Pentagon is currently wrestling with questions on how the pullout can be handled, including whether the American military equipment that’s scattered over the military bases in Syria can be pulled out within four months or should be destroyed in-place; what the U.S. can do to help protect its Kurdish partners; and maintain the 79-member international coalition aimed at eradicating ISIS. 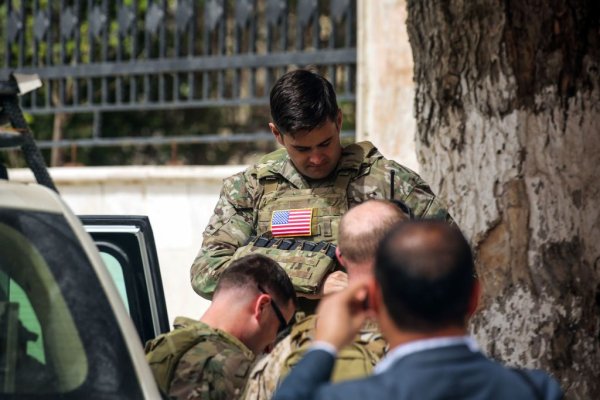 Trump's Withdrawal of U.S. Troops From Syria Will Boost Iran's Fortunes
Next Up: Editor's Pick