A Bizarre 'Ice Circle' Is Turning Heads in Maine. Here's the Science Behind It

Nature loves to make things round: planets, soap bubbles, oranges, eyeballs, the circular swirl of a spinning hurricane. A lot of forces are at play in favoring natural circles and spheres—the equalizing force of air pressure pushing out or gravity pulling in; the rotation of the Earth, creating vortices in air; the evolutionary imperative of efficient packaging.

The power of the round is in the news again, with the appearance of a massive, rotating ice disk in the Presumpscot River in Westbrook, Maine. The disk was first noticed on January 14, spinning in a lazy, counterclockwise direction. On social media, the ice circle was an instant sensation, alternately said to resemble a British crop circle or the mottled face of the moon—both fair descriptions. Either way, the Presumpscot ducks loved it, settling down for a slow-motion ride as the sights of Westbrook passed before them.

Ice circles are rare but hardly unheard of. What makes this one special is its size: 300 ft. in diameter, or 10 times bigger than the common 30-footers.

Big or small, all ice circles are formed by the same laws of physics. Random eddies in water will generally follow a circular route—the rotation of the Earth again—moving more slowly than the overall, downstream current. Bits of ice become trapped in the vortex and, since slower water is less turbulent than faster water, more ice is able to form and accumulate, eventually accreting into a sheet. As the sheet turns, it bumps up against the shore or other chunks of ice and is, in effect, lathed down until it is round.

River currents aren’t the only factor that contributes to the rotation of an ice disk. A 2016 experiment at the University of Liége in Belgium recreated an ice disk in the lab, finding that as temperatures rise a bit and ice from the edges begins to melt, the water it releases sinks and creates a gentle vortex of its own, which also imparts a spin to the ice floating above it.

Ice disks, of course, are fleeting things—longer-lived than the soap bubble, shorter-lived than a planet—vanishing entirely as the seasons change. It takes one more circle, the Earth’s revolution around the sun, to summon up another winter before they return. 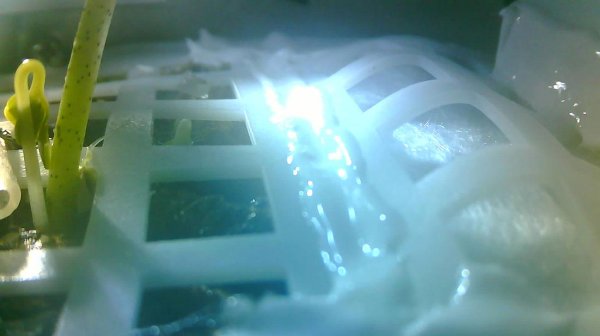 China Grows the First Seed on the Moon
Next Up: Editor's Pick