Why President Trump Is Quietly Caving on Parts of the Shutdown

When President Donald Trump signs a bill guaranteeing back pay for furloughed federal workers Wednesday afternoon, it will be a rare moment of bipartisan agreement during the ongoing partial government shutdown. It will also be the latest sign suggesting that Trump thinks he’s losing the fight.

In recent days, the Trump Administration has taken several moves to soften the effects of the shutdown. Some measures have been targeted broadly, allowing taxpayers to receive refunds, banks to process mortgages and airports to be inspected. Others are aimed at key Trump constituencies, ensuring that hunters can access federal lands and farmers can receive loans. And some seem designed to hit particularly close to home: the Administration went out of its way to keep park rangers staffing a historic clock tower at the Trump International Hotel in Washington.

It’s not entirely surprising Trump is looking for ways to limit the costs of what is now the longest-running shutdown in U.S. history. No doubt the president has seen the polls showing the majority of the public blames him and disapproves of the shutdown. And with the effects of a shuttered federal government only growing — airport lines, agricultural woes and costs to the economy are getting worse by the day — the political price of his face-off with Democrats is rising, too.

The concessions don’t mean that Trump will back down on his central demand that Democrats fund a $5 billion wall on the border with Mexico, however.

Republican Sen. John Kennedy of Louisiana, who rode on Air Force One with Trump to a farm convention in New Orleans this week, said he believes the president remains “resolute” in his desire for a border wall.

“I can’t imagine that he will reach any sort of agreement that doesn’t include a border wall,” he said.

But if Trump’s strategic goal remains the same, his tactical approach of softening the blow of the shutdown contrasts with how past presidents have responded to these kinds of impasses.

Facing a shutdown in 2013 that Republicans had launched in hopes of blocking the implementation of the Affordable Care Act, President Barack Obama erected barricades around popular monuments and memorials on the National Mall and closed national parks, in part to highlight the shutdown. Trump, meantime, has kept national parks open, leading volunteers to scrub toilets and collect trash.

As the shutdown has dragged on, the Trump Administration has made a number of other changes designed to ease the effects of the shutdown:

• The Treasury Department brought hundreds of furloughed Internal Revenue Service employees back to work to help process a key form that lenders need to grant home loans, after an intense lobbying push by the mortgage industry.

• The Department also announced it would bring back about 46,000 furloughed IRS employees—roughly half the agency—to work without pay, processing tax returns in order to ensure refunds go out promptly.

• The U.S. Fish and Wildlife Service brought back dozens of furloughed staffers at 38 wildlife refuges using leftover money from a previous budget year so that hunters could use the public lands.

• The U.S. Department of Agriculture is using a loophole in the law to continue providing food stamps for millions of Americans through February after initially saying they would run out at the end of January.

• The Agriculture Department announced that it is temporarily bringing back about 2,500 Farm Service Agency employees to process existing loans and provide tax documents for farmers.

• The Department of Interior is using leftover funds to bring back furloughed employees to work on sales of government land for oil and gas drilling in the Gulf of Mexico.

• The Federal Aviation Administration said it will bring back 1,700 furloughed inspectors and engineers to “perform duties to ensure continuous operational safety of the entire national airspace.”

• Trump is expected to sign a bill that would require 800,000 government workers who were either furloughed or working without pay to receive their wages retroactively after the shutdown ends.

The moves run counter to a lot of the comments coming from the White House, with Trump even arguing at one point that “most of the people not getting paid are Democrats.”

In an article in the conservative Daily Caller, an anonymous Administration staffer argued that the shutdown was actually good because it was weeding out poor-performing federal workers.

“We do not want most employees to return, because we are working better without them,” the staffer said.

That sentiment notwithstanding, the Trump Administration’s decisions to soften the impact of the shutdown indicate they don’t believe that it’s a political winner for the president. 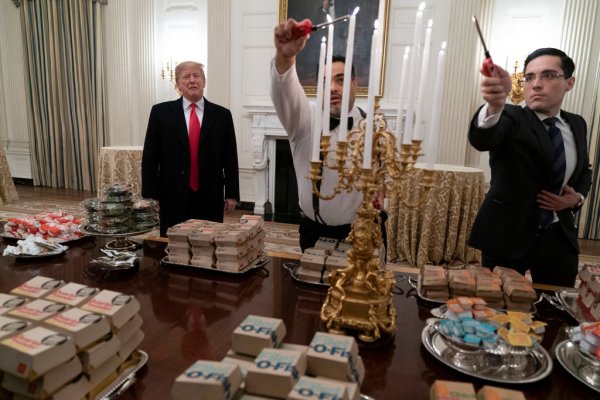