A Spanish city is up in arms over a proposed sculpture of Satan that residents say is portrayed too positively.

Segovia, a city in central Spain, is divided over plans to install the bronze statue portraying the devil grinning and taking a selfie, the BBC reports.

The effigy alludes to a local folktale, which says the city’s Roman-era aqueduct was built by the devil in exchange for a young girl’s soul. (She ended up getting it back, the story goes.) The two-tiered structure, built around the year 50 and spanning half a mile, is listed along with the old town center as a UNESCO World Heritage Site.

The Satanic sculpture was commissioned by the city council in hopes of drawing tourists to some of the town’s lesser-known neighborhoods, according to Spain’s El Pais newspaper. But residents were perturbed by the playful Prince of Darkness. Some 5,500 people — approximately 10% of the entire city’s population — have signed an online petition calling for the project to be scrapped.

The proposed sculpture is inappropriately “jovial” and “exalts evil,” the petition organizers write, adding that Satan should be “repulsive and despicable — not kind and seductive.”

“This representation is offensive to Catholics,” the petition adds.

The sculpture’s installation has been postponed while a judge reviews the merits of the argument, according to the BBC.

But the artist, José Antonio Abella, was astonished by the backlash.

“I love Segovia,” Abella, a retired doctor, told the BBC. “I haven’t done this for the money but as a personal tribute to the city I call mine. You can imagine how I feel.” 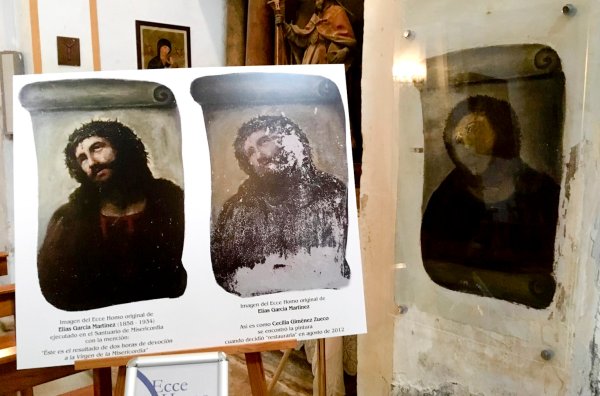 That Botched Jesus Restoration Is a Massive Tourist Attraction for a Small Spanish Town
Next Up: Editor's Pick