The Shutdown Is Still Going On. So Are the Political Stunts

No one on Capitol Hill or the White House seems any closer to resolving the longest government shutdown in U.S. history. In an effort to appear busy, however, both sides are resorting to political stunts.

There have already been three failed attempts this week try and break the nearly month-long stalemate. House Democrats brought legislation to the floor that would re-open the government through Feb. 1 to allow negotiations to continue, the White House invited a handful of moderate Democrats to a lunch to discuss a way out and freshman Democrats marched to Senate Majority Leader Mitch McConnell’s office to demand he work with them on a solution.

None of these efforts were successful, but then it wasn’t clear that anyone expected them to, either.

With only six House Republicans breaking with their party, Democrats in the lower chamber failed to get the necessary two-thirds support for their measure to re-open the government. (Normally they would need a simply majority but used a legislative mechanism requiring a higher threshold, which an aide said was the fastest way to get the bill to the floor). Every one of the Democrats invited to the White House declined the invitation. And the freshman Democrats were unable to talk to McConnell, because he was voting on the Senate floor.

The stunts were nothing new in the shutdown, either. House Democrats have been passing pieces of legislation to re-open parts of the government since they officially took back the majority earlier this month, even though they know full well that Trump won’t sign anything that does not include his requested $5 billion in border wall funding. Democrats maintain that all of these bills had previously garnered bipartisan support in the Senate and should easily pass, but Republicans are dismissing the efforts as political theater.

“The President is correct. In 45 minutes we can get this done. I’ve been in every single meeting. Never once have I heard the Democrats make any offer, in any direction,” House Minority Leader Kevin McCarthy said on Tuesday morning.

But since the last gathering six days ago between the White House and Congressional leadership, in which Trump walked out of the session because he was dissatisfied, there have not been any meetings to test McCarthy’s prediction.

The White House’s latest invitation to Democratic lawmakers came late Monday afternoon, and was only sent to a handful of them, primarily centrist House lawmakers hailing from districts where the President is popular. Absent from the invite list was House Speaker Nancy Pelosi and Senate Minority Leader Chuck Schumer — the two members of leadership who could actually broker the deal. Staffers found the invitation, which was brief and gave no indication what would be discussed, even more puzzling. (“On behalf of President Trump we would like to invite your Member of Congress to attend lunch at the White House tomorrow,” the invitation read, explaining that it was a “members-only” lunch.)

Democratic leadership gave these lawmakers the green-light to attend, but cautioned that Trump could be using them as pawns. “We support the notion of continued dialogue,” said Democratic Caucus Chairman Hakeem Jeffries. “[But the question is] is he inviting everyone to 1600 Pennsylvania Avenue to really try and resolve this problem or to create a photo op so he can project a false sense of bipartisanship?”

Ultimately, none of the Democrats accepted the invitation. The only members from the House of Representatives present at the lunch were House Republicans. While there were legitimate scheduling conflicts — Rep. Stephanie Murphy, who was invited, had a committee meeting — sources said lawmakers and staffers ultimately concluded it was a photo opportunity rather than a negotiating tactic.

“President Trump wasn’t being serious in that invitation and they weren’t fooled by it,” said one Democratic operative who had been in touch with Hill staffers about the developments. “The ones he invited are willing to work across the aisle — they want to work with Trump. But this wasn’t a serious offer.”

Soon enough though, Democrats had their own photo opportunity, when freshman lawmakers gathered on the steps of the Senate for an emergency press conference to demand an end to the shutdown. After convening outside the Capitol, they entered McConnell’s office, only to be told he couldn’t speak with them because he was on the floor voting. Even if he wasn’t, however, the idea that freshman Democrats would be able to entice McConnell — a veteran legislator who has purposely stayed above to fray — to come to the negotiating table was highly unlikely.

With no end in sight, the latest move seems to be for Congress to forego its recess next week. McConnell has said the Senate will not adjourn if the government is still shut down, and the House has already scheduled votes.

But it is unclear if even the prospect of missing time at home is enough incentive to reach a deal. Based on this past week, it probably isn’t. 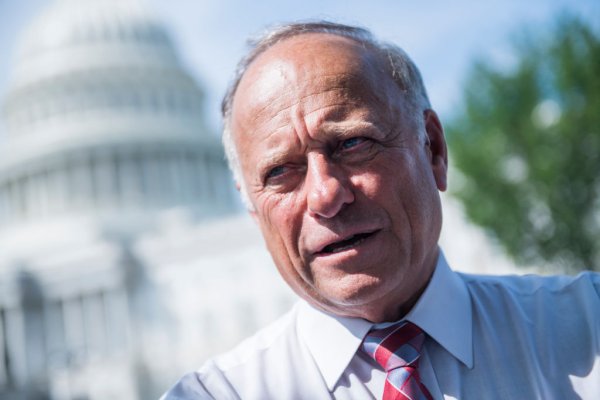 Why Republicans Finally Condemned Steve King
Next Up: Editor's Pick