All of the Hidden Unbreakable and Split References in Glass

Warning: This post contains spoilers for Unbreakable, Split and Glass.

When Split premiered in 2017, fans were shocked when director M. Night Shyamalan revealed in the final minutes of the film that it was actually a sequel to his 2000 film, Unbreakable. Shyamalan later confirmed in interviews that the plot of Split was originally written as the third act of Unbreakable. Now, Shyamalan is bringing all of his super-powered men together in Glass, the final entry in his realistic superhero trilogy. Fortunately for fans, Glass is filled with easter eggs and hidden connections to the two other films.

A quick recap for those who have forgotten what happened in the two previous movies: In Unbreakable, a man named David Dunn (Bruce Willis) survives a train crash and discovers that he has super strength and unbreakable bones. He can also see a person’s sins when he touches them.

David is skeptical of his powers until Elijah Price, a man with fragile bones who is obsessed with comic books, proves to David that he is indeed a superhero. Only once David has accepted his powers does Elijah reveal that he orchestrated the train derailment in hopes of revealing someone’s super powers. Elijah dubs himself Mr. Glass, a supervillain who is David’s perfect opposite, before he is institutionalized.

In Split, a mysterious man (James McAvoy) kidnaps three teenage girls. The teens eventually realize that the man has 24 personalities, including the Beast, a super-strong cannibal. The man, born Kevin Wendell Crumb, was abused as a child and a series of meetings with his therapist reveal that the personalities (including his most dangerous, the bulletproof Beast) emerged to protect Kevin.

The Beast eats two of the girls, saying that he gains power from them. He lets the third girl Casey (Anya Taylor Joy) go because she has suffered through sexual abuse at the hands of her uncle and, according to the Beast’s philosophy, those who suffer will inherit the earth.

Thus the scene is set for Glass, in which David, Kevin and Elijah are all thrown into a psychiatric hospital because of their superhero delusions. At the end of Glass, Elijah orchestrates a fight between the Beast and David outside the hospital and films the interaction to prove to the world that superheroes and supervillains are real. All three men are eventually killed by a secret cabal led by Dr. Ellie Staple (Sarah Paulson) whose mission it is to take out all super-powered people, good or evil, to protect the world.

Throughout Unbreakable, David wears lots of green (the color of the poncho he wears while fighting crime), and Elijah wears purple. In Split, Kevin wears yellow when he transforms into the Beast. All three characters continue to wear those respective colors in Glass, while Dr. Staple wears a lot of pink.

Shyamalan uses these colors palettes throughout the film. The shelves in the comic book store where David’s son, Joseph (Spencer Treat Clark), shops are painted both purple and green. And the room where Dr. Staple speaks to the three men together is pink, signaling perhaps that she is in control of the situation.

M. Night Shyalaman often makes cameo appearances in his movies. He plays two seemingly unrelated roles in Unbreakable and a landlord in Split, only to reveal in Glass that the two men were the same person.

Shyamalan plays one of David Dunn’s first targets in Unbreakable. David, a security guard at a football stadium, brushes by Shyamalan’s character and sees that he was carrying drugs.

Shyamalan appears again in Split, this time as Dr. Karen Fletcher’s landlord. Dr. Fletcher asks the landlord to play footage from a security camera outside of her building for her. Watching it, she is able to confirm that the Hive has taken control of Kevin Wendell Crumb’s body. She later confronts the Hive and is killed.

In Glass, Shymalan reveals that his two cameos are related. He plays a man who visits David Dunn’s electronic store and talks about how he is a former drug dealer who “turned himself around” and became a super. He is buying surveillance equipment because one of his tenants (Dr. Fletcher) was recently murdered.

All three movies revolve around the train derailment that takes place in the opening minutes of Unbreakable. David Dunn is the only person to survive the accident in that film, which Elijah later reveals that he caused.

In Split, Kevin must go to the train tracks in order to unleash his final personality, the Beast. In that movie, he explains to his therapist, Dr. Fletcher, that his father left on a train and never returned, leaving Kevin with his abusive mother.

In Glass, Joseph discovers that Kevin’s father was killed in the same train accident that David survived. Thus, Elijah created two superheroes with one catastrophe.

Casey’s coat from the zoo

Kevin Wendell Crumb kept the girls he kidnapped under the zoo in Split. A zookeeper discovers Casey, the lone survivor, at the end of the film and offers her his jacket. (At this point her shirt has been ripped in her fight with the Beast.) Casey dons the coat during a scene from Glass as she leaves the mental hospital after her meeting with Dr. Staple.

When The Beast emerges, he reveals two scars on his torso where Casey shot him with a shotgun in Split.

Elijah hints that he will stage the final showdown between David and the Beast at Philadelphia’s tallest building. He gets the idea from a magazine cover, which declares the tower a “marvel” in the headline. The phrase is a nod to the prolific comic book publisher.

But the fact that the building is associated at all with Marvel should have tipped audiences off to the fact that the heroes and villains of Glass would never fight there. Shyamalan has called Glass a realistic superhero movie. Fighting at the top of a tower, as Marvel superheroes would, defies realism. Instead, Elijah forces the final fight to take place outside the mental hospital, where he can secretly control all the cameras and leak the footage out to the world. 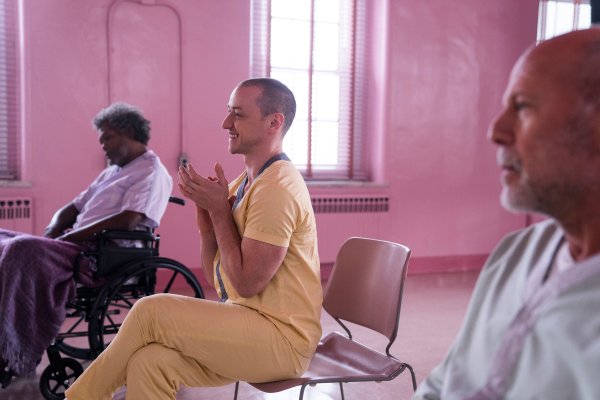 Let's Talk About the Ending of Glass
Next Up: Editor's Pick