Chris Pratt Is Doing the Daniel Fast Diet. But Is It Healthy?

The Daniel Fast has been around a long time — since the Old Testament, in fact. But actor Chris Pratt gave it new popularity recently by posting an Instagram story about adopting it as his latest diet.

Pratt described the plan as “21 days of prayer and fasting.” But what does the Daniel Fast actually entail — and is it healthy? Here’s what you need to know.

What is the Daniel Fast?

The Daniel Fast is a religiously rooted, short-term eating plan drawn from the Book of Daniel, which appears in the Old Testament. In the story, Daniel decides to avoid the rich, indulgent foods that surround him and have “nothing but vegetables to eat and water to drink” for 10 days. (Some translations interpret vegetables as pulses, meaning foods grown from seeds.) A later reference says, “I, Daniel, mourned for three weeks. I ate no choice food; no meat or wine touched my lips; and I used no lotions at all until the three weeks were over.” At the end of the fast, he was healthy, to everyone’s surprise.

Despite its ancient roots, books and online guides to the Daniel Fast have been published since about 2007, when The Daniel Fast blog launched. Most contemporary guides direct followers to eat only food grown from seeds — such as fruits, vegetables, legumes and whole grains — for 21 days, and cut out alcohol, caffeine, meat, dairy, sugar, fats and processed foods.

While most plans do not offer specific advice on lotions, they emphasize the importance of sacrificing physical and material comforts for the sake of spiritual growth; many followers also combine the eating style with regular prayer or spiritual practice. It’s popular among Evangelical Christians, and in 2011 a California pastor used the diet to help his evangelical congregation lose a collective 260,000 pounds.

Is the Daniel Fast healthy?

Richard Bloomer, dean of the University of Memphis’ School of Health Studies, has conducted multiple small studies on the Daniel Fast. His research has found that, after just three weeks, the diet can begin to lower risk factors for metabolic and cardiovascular disease, such as high blood pressure and cholesterol, and reduce oxidative stress, a physical imbalance that may contribute to chronic disease formation. In general, plant-based diets are associated with health benefits including lower rates of chronic disease and longer lives.

“It just shows, I think, the power of food,” Bloomer says. “There’s a lot of potential health benefits from adopting this approach.”

Bloomer says the Daniel Fast is essentially a vegan diet, but potentially even healthier, since it eliminates processed foods that can come with sugar, fat, salt and preservatives. “We’re not thinking [the health benefits come from] the restriction in animal protein, per se, but more the restriction in all the other stuff that you would find in packaged foods,” as well as the addition of more nutrient-rich foods, he says.

While the Daniel Fast does not explicitly restrict the number of calories followers consume, Bloomer says most people who follow it end up eating fewer by filling up on nutrient- and fiber-dense whole foods instead of meat, dairy and processed products. He says most followers lose five to six pounds over the three weeks and report other benefits like clearer skin, more energy and better focus.

Dr. Wayne Jonas, a family physician and executive director of Samueli Integrative Health Programs at the University of California, Irvine, says this kind of calorie restriction — which is similar to the type in intermittent fasting — is not dangerous, as long as people are still eating enough to feel satiated. “It’s a religious framework around a process that we’ve known about biologically for a long time,” he says.

Jonas explains that periodic calorie restriction can not only spur weight loss but also kickstart cellular and metabolic processes that enhance good health.

“We are over-indulged in calories most of the time in this country, so by doing less of that, you’re going to get health benefits,” Jonas says. “Your body is going to kick in some of the reparative and metabolic processes that we know are associated with a longer life.”

Should you try the Daniel Fast?

Jonas says most fairly healthy people should be able to complete the Daniel Fast with no problems. People with chronic health conditions — especially those that require dietary monitoring, such as diabetes, congestive heart failure and kidney disease — should consult a doctor first.

Anybody who chooses to take on the Daniel Fast should make sure they’re adequately prepared, Bloomer says. While plenty of meals can be created from plant foods, Bloomer says people who typically rely on restaurants, takeout and packaged foods can find it difficult to adjust.

“If people hear about it and read about it, I wouldn’t suggest that they go out and start it the next day,” Bloomer says. “Go shopping, and spend time looking at labels. It’s forced nutrition education.” 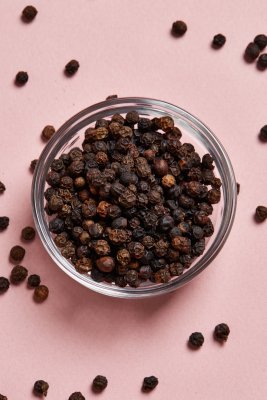 Is Black Pepper Healthy? Here's What the Science Says
Next Up: Editor's Pick