How William Barr Tried to Reassure Democrats at His Confirmation Hearing

With a measured tone and carefully worded answers, William Barr sought Tuesday to reassure senators that he would protect the Justice Department’s vaunted independence if he were confirmed as attorney general.

He said that he’s often told other people they would be crazy to take the job. Over the years, Barr said he’s told friends who’ve mused about becoming the nation’s top cop that they shouldn’t do it if they want to have a future in politics, since at any point they may need to take an unpopular stand.

But as a former attorney general who served under George H.W. Bush and private lawyer in the twilight of his career, he argued that he can take on the powerful role.

“I feel like I’m in a position in life where I can do the right thing and not really care about the consequences,” Barr, 68, told the Senate Judiciary Committee. “I am not going to be bullied into doing anything I think is wrong.”

The questions at his hearing were not an academic exercise. As president, Trump has tested legal limits and pushed against the independence of the Justice Department. He told former FBI Director James Comey that he expected “loyalty,” according to Comey, then fired him as the agency pursued an investigation into the president’s relationship with Russia. He has called on the Justice Department to investigate his political opponents and repeatedly criticized former Attorney General Jeff Sessions for his recusal on the Russia investigation. He has threatened to fire Special Counsel Robert Mueller, a move that could spark a constitutional crisis.

Senate Democrats pressed Barr about these issues, and he responded by promising to protect the Mueller investigation and “provide as much transparency as I can,” about its findings. He also contradicted one of Trump’s favorite catchphrases, saying, “I don’t believe Mr. Mueller would be involved in a witch hunt.”

Democrats had reason to be concerned going into the first day of hearings. In June of 2018, Barr sent a long memo to the Justice Department that was fiercely disapproving of the fact that Mueller is reportedly looking into whether Trump obstructed justice in the events surrounding his firing of Comey. The obstruction inquiry is based on a “fatally misconceived” theory, Barr wrote, according to the Wall Street Journal. “As I understand it, his theory is premised on a novel and legally insupportable reading of the law,” Barr wrote. “Moreover, in my view, if credited by the Justice Department, it would have grave consequences far beyond the immediate confines of this case and would do lasting damage to the Presidency and to the administration of law within the Executive branch.”

But Barr was quick to note before the Judiciary Committee that this memo was narrowly tailored to a specific statute, and that he has no qualms about the investigation’s focus on Russia matters. “I believe the Russians interfered or attempted to interfere in the election and I think we have to get to the bottom of it,” he said.

Barr and Mueller are “good friends,” as Barr described it, having served in the Justice Department at the same time in the early 1990’s. Trump knew this before he nominated Barr to be attorney general — Barr confirmed Tuesday that he met with Trump in June of 2017 to talk about joining his legal defense team. Barr declined, but told the committee that at that time Trump had asked him about his relationship with Mueller and wondered about Barr’s assessment of Mueller’s integrity. He says he told Trump that Mueller “is a straight shooter and should be treated as such.”

While Trump often lashes out at Mueller’s team on Twitter, Barr said Trump “has sought no assurances, promises, or commitments from me of any kind, either express or implied, and I have not given him any.” Barr said he wouldn’t even fire Mueller for “good cause,” the standard laid out in the regulations governing the special counsel’s appointment. “Frankly, it’s unimaginable to me that Bob would ever do anything that gave rise to good cause,” Barr said. He added that he would want to meet a higher bar than “good cause” for termination. To be fired, Mueller would have to commit a transgression that is “pretty grave, and the public interest would essentially have to compel” Mueller’s dismissal, Barr said, because he thinks the overriding public interest is currently in letting Mueller finish his investigation.

In all, Barr’s testimony on Tuesday contained more details that might be worrisome to a White House anticipating the fallout from Mueller’s findings than to Democrats anxious about the Oval Office interfering in the Justice Department. He even took a direct hit at Trump’s legal team: when asked about Trump lawyer Rudy Giuliani’s assertion that he should be able to “correct” Mueller’s report before it could be made public, Barr said simply, “That will not happen.”

Barr “is a very honorable man, doing what he believes, and the President respects that,” White House Press Secretary Sarah Sanders said Tuesday. “The President thinks he will be a great Attorney General.”

To be sure, Barr’s assurances about Mueller in his hearings don’t mean that the way he conducts himself as attorney general won’t ever align with Trump’s wishes. “It appears to me that Barr is going just far enough to get confirmed,” says former federal prosecutor Renato Mariotti. “He isn’t committing not to overrule Mueller. He isn’t committing to follow ethics advice. But obviously he’s being reassuring about Mueller as much as possible because he needs 50 votes.”

Apart from the Mueller investigation, Barr sketched out an expansive view of executive power that fits within current Republican thinking while also giving Trump leeway to pursue his goals. He said multiple times that he supports a physical barrier along the Southern border, Trump’s signature campaign promise and the issue at the center of the current partial government shutdown. (“You call it the Trump shutdown, but it takes two to tango,” Barr told Democratic Vermont Sen. Patrick Leahy at one point.)

Under questioning from Democratic Sen. Cory Booker, Barr, who was known as an advocate for tougher crime policies in the 1990s, said he thinks “the heavy drug penalties, especially on crack and other things, have harmed the black community, the incarceration rates on the black community,” while saying he thinks the system “overall” is working and treats black and white people fairly.

On a related issue, Barr said that while he thinks Congress should pass a federal law barring recreational marijuana nationwide, he would not use the powers of the Justice Department to end the experiments under way in states like Colorado and Washington that have legalized the drug on a state by state basis.

Barr said his top priorities as attorney general will be criminal justice reform, reducing violence on the basis of race, ethnicity, political orientation or sexual orientation, clamping down on illegal immigration, and protecting voting rights.

Throughout the day, there weren’t any disruptions from the public seats, a striking departure from Sessions’ hearing two years ago, which was continually interrupted by loud protests. But while the temperature in the room was lower for Barr than for Sessions, the stakes of his appointment are arguably higher — Mueller hadn’t yet been appointed when Sessions was considered for the post. He only needs 50 votes to be confirmed, leaving Republicans with a comfortable margin to confirm him along party lines. How the Senate ultimately votes on Barr, and how he chooses to exercise his power, will have a significant impact on the country and Trump’s presidency.

One former White House official who knows Barr notes that if he is confirmed, “I have no doubt that he will on some occasions have to say no to someone in the White House who wants something done, and it might earn him a tweet or two, but I don’t think he’ll let it bother him.” 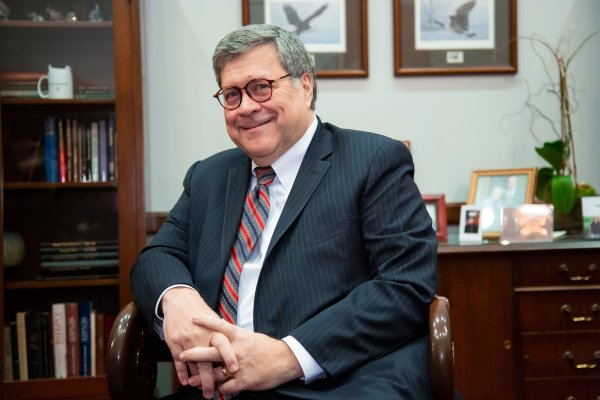