'It’s the Saddest Thing in the World, Sex.' The Author of The Perfect Nanny on Her Next Sensational Novel

Leila Slimani says she’s not particularly interested in shocking people. This is a somewhat surprising claim, since the book that made the French Moroccan novelist a best-selling star last year, The Perfect Nanny, began with two simple, devastating sentences: “The baby is dead. It took only a few seconds.”

That novel, which echoed an infamous New York City “killer nanny” story, caused a sensation for its dissection of the relationship between mothers and those who care for their children, of the soul-crushing tedium of looking after small humans, of the fury that radiates between the have-it-alls and the have-not-enoughs. It earned the now 37-year-old, herself a mother of two, France’s top literary prize, the Prix Goncourt, in 2016. She is so well-regarded that President Emmanuel Macron has brought her onto his administration as an official cultural emissary.

Slimani’s next novel released in the U.S., Adèle, likewise provokes: it takes a dispassionate look at the scandalous sexual behavior perpetrated by a woman living a seemingly “normal” life. “If we really know people, if we know what’s behind the mask,” Slimani tells TIME, “everyone is shocking.”

In Adèle, published in France before The Perfect Nanny, Slimani’s protagonist is a deeply unhappy woman. Adèle medicates her misery with alcohol and intercourse, the more dangerous and degrading the better. The source of her discontent is unclear: she has a respectable and reasonably caring husband, a young son, a Paris apartment and an interesting job. She’s squarely in the “has it all” sector.

But “it all” is as chaff in her mouth. It is subsistence but not nourishment; she craves flavor, spice, hot sauce. Adèle yearns, Slimani writes, to rediscover the “magical feeling of actually touching the vile and the obscene, the heart of bourgeois perversion and human wretchedness” that she got when, as a child, her mother’s lover took them both around the seedier parts of Paris. Her increasingly risky assignations indirectly lead to her husband being hospitalized, and it gets worse from there.

“It’s the saddest thing in the world, sex,” says Slimani. “When you see yourself having sex, and you see your partner, and you see something animal.” She is not talking about the abandoned passion people experience early in a relationship, but the more garden variety of sex she says people usually have. “It’s melancholy and disappointing because you want to have fusion with someone, to fight your loneliness. But you’re even lonelier.”

It’s not hard to draw a line between Slimani’s novels. Both explore that creature that lies curled in the human soul, waiting to be woken by trauma or rage, to perform acts of great violence or lust. The author’s focus is on underestimated women; those who are domesticated, provided for, dutiful. Recently, Slimani found a card her colleagues gave her in 2013, when she left her job as a journalist covering Tunisia and Egypt (Adèle has the same profession) to try to write fiction. “Even though I said to everyone that I was going to quit because I wanted to write,” says Slimani, “everyone wrote about the fact that I had a little baby at home and I was going to take care of him.”

At the time, she didn’t even notice. But two novels in, she’s mildly “scandalized,” she says, by how her colleagues underestimated her. Perhaps their mistake was to fetishize domestic life in a way Slimani does not. In her novels, home and hearth are a furnace, not a haven. Families are groups in which power struggles are conducted in close quarters, and with gloves off. “The house is a political place, a place of violence and domination,” she says. “It’s a place where there is a fight—or maybe a war.” 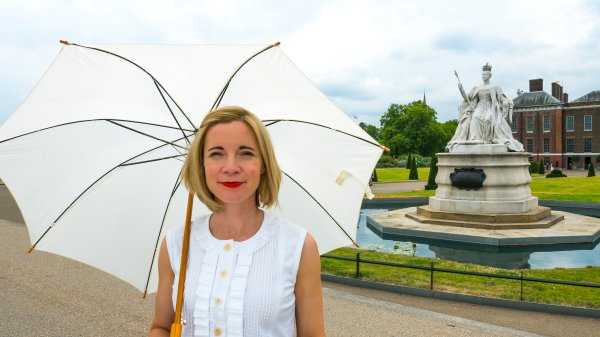 Historian Lucy Worsley on Royal Weddings, Queen Victoria and the 'Big Mistake' People Make About the Past
Next Up: Editor's Pick