The Clemson University football team was invited to the White House Monday to celebrate their College Football National Championship win in a scene that was also a feast for social media users.

The South Carolina team, which defeated the University of Alabama’s Crimson Tide 44-16 on Jan. 7, was offered a candelabra-lit spread of takeout food from McDonald’s, Wendy’s, Burger King and Domino’s.

In a since-deleted tweet, the president boasted that the group was served 1,000 “hamberders” at the event that he paid for himself – a spelling error that immediately prompted online snickers. Meanwhile, aides said there were closer to 300 burgers at the event.

The President reportedly paid for the food himself because many of the White House staff are furloughed due to the partial government shutdown, Deputy Press Secretary Hogan Gidley told CNN in a statement.

Trump, who has claimed to be a big fan of fast food himself, told reporters before the event, “We have some very large people that like eating. So I think we’re going to have a little fun.”

Later, Twitter users had more than a little fun with the “hamberders” typo.

Some pointed out that nothing kept the fast food warm as it sat on the tables. While Trump’s critics implied that the junk food was a good metaphor for the President himself.

“This is an incredible self-own for someone who aims to be worth $10 billion,” wrote user Judd Legum.

The meal also caught the attention of former NFL running back Reggie Bush, who tweeted that the dinner was “disrespectful on so many levels.”

In a video of the event, the players seem to be enjoying the food. One player loudly says that the food is “awesome.” 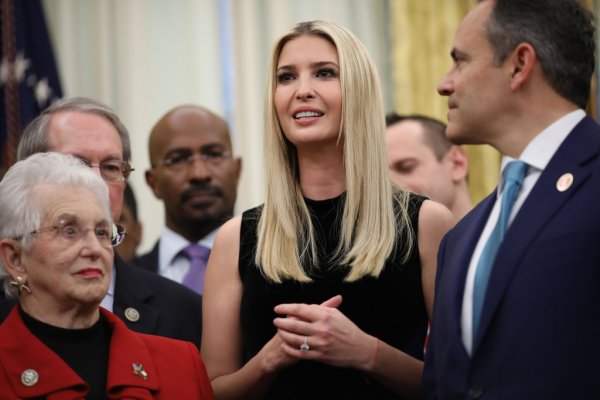 Ivanka Trump Isn't in the Running to Lead the World Bank Despite Reports, White House Says
Next Up: Editor's Pick