(Bloomberg) — Opposition Labour leader Jeremy Corbyn gave his clearest indication yet that his party is ready to call a no-confidence ballot within days of Theresa May losing a U.K. parliamentary vote on her Brexit deal.

Lawmakers are scheduled to vote Tuesday on the agreement May reached with the European Union, and the prime minister appears no closer to getting the backing she needs than she was in December, when the vote was dramatically pulled after it became clear the government was heading for a defeat.

Speaking on the BBC’s “Andrew Marr Show” on Sunday, Corbyn said a confidence vote would be brought “at a time of our choosing, but it is going to be soon, don’t worry about that.”

As May made a last-ditch appeal to members of Parliament, the Guardian reported the EU is expecting a request from London to extend the March 29 deadline for leaving the bloc. A probable first step would be a “technical” extension until July to allow the prime minister to revise and ratify the Brexit deal, the newspaper said, citing EU sources it didn’t identify.

May, in a Sunday Express op-ed, said opponents of her deal risk letting down the majority that voted to leave the EU in 2016.

“Doing so would be a catastrophic and unforgivable breach of trust in our democracy,” May wrote. “My message to Parliament this weekend is simple: it is time to forget the games and do what is right for our country.”

A defeat would leave Britain on course to leave the EU with no new trading arrangements in place. According to Bank of England analysts, such a chaotic split could hammer the pound and house prices and plunge Britain into a recession worse than the financial crisis a decade ago.

Corbyn is seeking to topple the government by forcing a general election. Under British electoral law, May’s Conservatives would have two weeks following a lost confidence vote to form a new government. If they fail, an election would be called.

The Labour leader faces a major hurdle: His chances of winning a confidence vote are slim, as he’d have to gain the support of both Tory and Northern Irish lawmakers, who fear a Labour takeover of government. If a confidence vote failed, he’d be under pressure to back a second Brexit referendum, risking a backlash from the many Labour supporters who voted to leave the EU.

Corbyn said he’d prefer to see a negotiated deal than a second referendum. Labour says it wants a full, permanent customs union with the EU, something that would appall many pro-Brexit Tories, though senior ministers are now said to be urging May to ask Corbyn for help in the hope of agreeing on a joint plan.

Read More: What You Need to Know as Brexit Deadline Nears

A no-deal Brexit would be “catastrophic” for industry and trade, Corbyn told the BBC. “We will do everything we can to prevent a no-deal exit.”

The Sunday Times reported that some lawmakers are planning to seize control of the legislative agenda from the government in an act that would allow Parliament to extend the Brexit deadline or even overturn the decision to leave the EU.

A senior government official on Sunday described the plan as extremely concerning, since if it succeeds lawmakers would gain control over not just Brexit legislation but all legislation.

In a warning to Conservative rebels ahead of the vote, Brexit Secretary Stephen Barclay said that Brexiteers seeking “ideological purity” are in danger of seeing Britain not leave the EU at all. But asked about a Brexit Plan B, Barclay hinted that May is not ready to ditch her plan if it’s defeated, saying he “strongly suspects” lawmakers will end up voting for “something along the lines” of the current deal.

The EU is waiting to see the outcome of Tuesday’s vote — and the margin of the expected defeat — before considering its response, officials said, with some predicting that May will have to delay Brexit.

A margin of defeat exceeding about 60 lawmakers would probably mean the agreement is close to death and negotiations are in uncharted waters, several EU officials said. A narrower defeat and the bloc may look at fresh ways of making the agreement more palatable to get it across the line in Parliament.

The EU is expected to publish a letter on Monday in which the bloc will reiterate that the so-called Irish backstop arrangement, if it is triggered, will only be temporary. The contents are unlikely to appease Brexiteers who fear Britain will end up being tied to EU trade rules indefinitely. 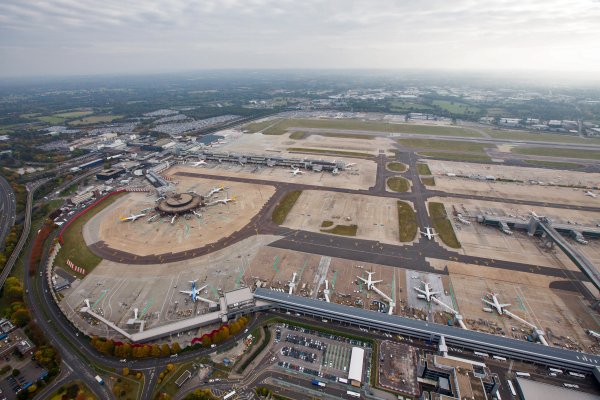 British Army Withdraws From Gatwick Airport After Drone Scare
Next Up: Editor's Pick