(Bloomberg) — Environmentalists have identified another threat to the planet. It’s called a nurdle.

Nurdles are tiny pellets of plastic resin no bigger than a pencil eraser that manufacturers transform into packaging, plastic straws, water bottles and other typical targets of environmental action.

But the nurdles themselves are also a problem. Billions of them are lost from production and supply chains every year, spilling or washing into waterways. A U.K. environmental consultancy estimated last year that preproduction plastic pellets are the second-largest source of micro-plastic pollution in water, after micro-fragments from vehicle tires.

Now, shareholder advocacy group As You Sow has filed resolutions with Chevron Corp., DowDupont Inc., Exxon Mobil Corp. and Phillips 66 asking them to disclose how many nurdles escape their production process each year, and how effectively they’re addressing the issue.

As justification, the group cites estimates of high financial and environmental costs associated with plastic pollution, and recent international efforts to address it. These include a United Nations conference in Nairobi and a U.S. law banning micro-plastics used in cosmetics.

“We’ve had information over the last couple of years from the plastics industry, that they’re taking this all seriously,” said Conrad MacKerron, senior vice president of As You Sow. The companies say they have set goals to recycle plastics, he said. “This is really more of a bellwether moment, as to whether they’re serious … if they’re willing to come out, warts and all, and say ‘here’s the situation. Here are the spills that are out there. Here’s what we’re doing about them.’”

The companies already participate in Operation Clean Sweep, a voluntary industry-backed effort to keep plastics out of the ocean. As part of an initiative called OCS Blue, members are asked to share data confidentially with the trade group about the volume of resin pellets shipped or received, spilled, recovered and recycled, along with any efforts to eliminate leakage.

Jacob Barron, a spokesman for the Plastic Industry Association (PIA), an industry lobby, said “the provision about confidentiality is included to eliminate competitive concerns that might prevent a company from disclosing this information.” The American Chemistry Council, another lobbying group, co-sponsors OCS along with the PIA. In May, it announced long-term industry-wide goals to recover and recycle plastic packaging, and for all U.S. manufacturers to join OCS Blue by 2020.

There’s limited information on the extent of this kind of plastic pollution by U.S. companies, and global researchers have struggled to make an accurate assessment. A 2018 study estimated that 3 million to 36 million pellets may escape every year from just one small industrial area in Sweden, and if smaller particles are considered, the quantity released is a hundred times greater.

New research is revealing the ubiquity of plastic pellets

Eunomia, the British environmental consultancy that discovered nurdles are the second-largest source of micro-plastic pollution, estimated in 2016 that the U.K. could be unwittingly losing between 5.3 billion to 53 billion pellets into the environment every a year.

New research is revealing the ubiquity of plastic pellets, from the bellies of fish caught in the South Pacific, to the digestive tracts of short-tailed albatross in the north and on the beaches of the Mediterranean.

Braden Reddall, a spokesman for Chevron, said the fossil fuel giant’s board reviews shareholder proposals and makes recommendations for each in its proxy statement, planned for April 9. Rachelle Schikorra, a spokeswoman for Dow, said the company regularly talks with shareholders about sustainability and works to “develop solutions that keep plastic out of our environment.”

Joe Gannon, a spokesperson for Phillips 66, said his company “has received the shareholder proposal and has offered to engage with the proponent.” ExxonMobil declined to comment.

The companies will decide in the next several months whether to include the resolutions in this year’s proxy statements, according to As You Sow. 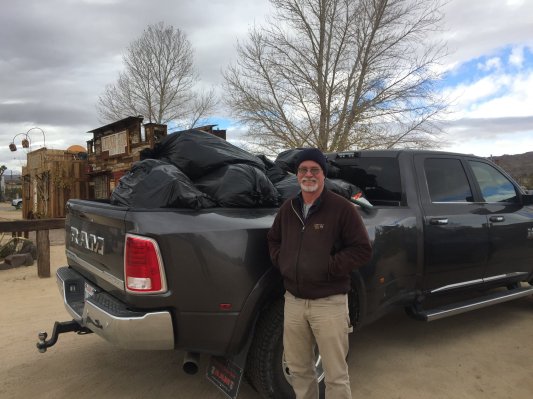 Meet the 'Toilet Paper Angels' Who Tackle the Dirty Job of Cleaning Up National Parks During the Shutdown
Next Up: Editor's Pick