As the United States slogs through the third week of its government shutdown, Stephen Colbert does not share President Donald Trump’s assessment that things in the country are “peachy dory.” In fact, he’s not even sure that he knows what that means.

During Thursday’s edition of “Chopper Talk” on The Late Show, Colbert weighed in on the Thursday press conference Trump gave when he threatened to declare a national emergency to bypass Congress if he can’t convince Democrats to approve more than $5 billion in funding for a border wall. He also said that reports that he slammed the table and stormed out of a Wednesday meeting with Senate Minority Leader Chuck Schumer and House Speaker Nancy Pelosi were incorrect.

“Well the news incorrectly reported, because I said, ‘Well, if we go back and everything is peachy dory and you say we’ll talk over thirty days, at the end of thirty days are you going to give us great border security, which includes a wall or a steel barrier?’ She said no,” Trump said. “I didn’t pound the table, I didn’t raise my voice. That was a lie.”

However, it was Trump’s turn of phrase, rather than the statement itself, that got Colbert’s attention.

“Peachy dory? You can’t just mix phrases like that,” the late-night host quipped. “It makes it sound like you’re not playing with a full deck of marbles. Not the sharpest knife in the spoon.” 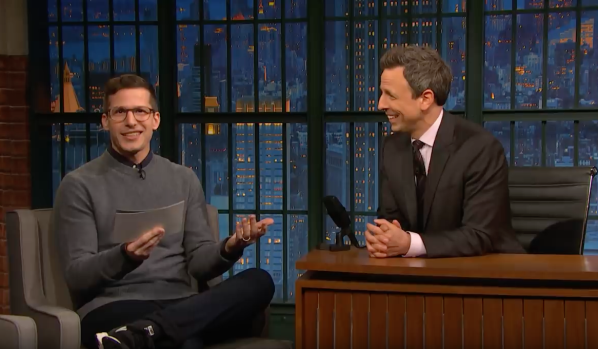