Governor Gavin Newsom and wife Jennifer Siebel Newsom gesture to the crowd after taking his oath of office on Jan. 7, 2019 in Sacramento, Calif.
Stephen Lam—Getty Images
By Katy Steinmetz

Jennifer Siebel Newsom, the wife of California Gov. Gavin Newsom, casually added four words to her Twitter bio this week: “First Partner of California.” And with that, it was official. The 44-year-old documentary filmmaker would not be going by the traditional title of “first lady,” thus rejecting a moniker that has been used to describe political wives for centuries.

Newsom has had a long time to think about this, given that her husband — formerly California’s lieutenant governor and the mayor of San Francisco — has had his sights set on California’s highest office for years. The decision, says her communications director Hannah Milgrom, was sparked by the desire to address stereotypes about what it means to be a politician’s wife.

Yet Newsom is hopeful that the decision will send a larger signal about inclusion, not just about her own autonomy. As she rejects the connotations of fragility and dependence that cling onto the word lady, she is also embracing a gender-neutral term at a time when many young people, particularly LGBTQ youth, are questioning assumptions about what it means to be a man or woman in the first place. Why, Milgrom asks, should the title for a governor’s spouse send a signal about gender at all? After all, a governor is just a governor.

The move may be received in more conservative quarters as yet more evidence of politically correct culture run amok in the Golden State. Others might see it as a ploy to score progressive points or even as appropriating a term that should be reserved for gay culture. But it is very much in character for Newsom, an actor who turned to documentary film because she was distressed by the limiting, over-sexualized representations of women she saw in the media.

As the founder of an organization called The Representation Project, she has spoken about giving kids tools to “challenge toxic norms” and about the importance of intersectionality. In a past interview with TIME, the mother of four lamented how people sent pretty pink gifts when she and Gov. Newsom had a daughter and silver cups with messages that her child was a “natural born leader” when they had a son. “Right out of the womb, boys and girls are getting different messages,” she said.

Whatever one thinks about Newsom being California’s first “first partner,” it’s a sign of just how much America has changed since the days when Julia Tyler — wife of America’s tenth president, John Tyler — expressed the preference that people call her “Lady Presidentress.”

There is debate about when the wife of a U.S. president started being designated as the “first lady,” a title that has also been used for governors’ wives and other prominent women like Ella Fitzgerald (“First Lady of Song”) and Lucille Ball (“First Lady of Television”). Some assert that the term got traction after Zachary Taylor used it in a eulogy for Dolley Madison in 1849. Others have claimed that Harriet Lane, the niece of bachelor president James Buchanan, was the trendsetter several years later as she served as hostess in the White House.

Historians seem to agree on a few things. The title wasn’t in any regular use back in Martha Washington’s day. (She was more likely to be addressed as “Lady Washington.”) And it was taking off by the late 1800s, sometimes as part of loftier titles like “First Lady of the Land.”

As historian Matthew Costello recounts in a piece for the White House Historical Association, titles like “Mrs. President” and “the President’s wife,” as well as “Lady Presidentress,” gave way to “first lady” as women started to expand the powers of the position. This was particularly the case with Eleanor Roosevelt, who held her own press conferences, championed humanitarian causes and helped set new expectations for just how active and influential the wife of a president could be.

Crucially, Roosevelt was operating at a time when a “lady” existed as the refined, respectable alternative to “woman,” at the time a rather derogatory word used to suggest someone was a lower-class sex object.

It was only after World War II, when men tried to push Rosie the Riveter back into the kitchen, that American women pushed back on the notion that they must “act like a lady.” And it was even later, in the 1970s, that second-wave feminists succeeded at reclaiming the word woman. As Anne Curzan, a professor of English at the University of Michigan, has explained, if you call a woman a “lady,” you put her on a pedestal and therefore restrict her movement. It might seem genteel, but the word can also be used to make one seem frivolous and frail.

By the time 2016 came around and America seemed on the cusp of having its first woman president, some critics were dismissing the title of “first lady” as “archaic.” It may have risen to prominence as a way to recognize the power of a president’s wife, yet even titles that sound like an upgrade can be deceptive. For instance, in some monarchies, when a king marries a woman of lower rank she might take the title of queen. When a queen does the equivalent, her husband receives or retains a lower title such as prince; marriage isn’t enough to make him a king. But this disparity is really about the power of men: While a queen can symbolically sit on the throne, a king is destined to rule.

Jared Polis was recently sworn in as America’s first openly gay governor in Colorado. According to the Denver Post, Polis at one point introduced his longtime partner, Marlon Reis, as “Colorado’s first man.” They are not legally married, so when it came to choosing a more official title, it would have made sense for Reis to become a “first partner.” Instead, he opted for the more traditional title of “first gentleman.”

When it looked like Hillary Clinton might make history in 2016, there was much chatter about what to call former President Bill Clinton. Suggestions ranged from the technical (“first husband”) to the flippant (“first bubba”). But it’s a different calculation for political husbands, members of a gender that has historically been presumed powerful unless proven otherwise.

Robert Hickey, an expert on honorifics and titles who works at The Protocol School of Washington, says he is not aware of anyone using the title “first partner” before Newsom. He also suggests that its connotations of empowerment can only go so far. A title like “first spouse” would also be gender-neutral. The word “partner,” however, has the added flair of suggesting an equal split in power. Yet, he writes in an email, “From a protocol point of view, it is only the official who has precedence.” No matter how grand the title sounds, in other words, the spouse’s power is necessarily secondary as it derives solely from marriage to the person who got elected.

So far, Newsom isn’t ready to announce what she will use her position to do. News about signature causes will be forthcoming, says Milgrom. But it’s a good bet that the work of California’s First Partner will have a component that is about moving beyond labels. She has said that society fails both girls and boys by being too prescriptive about what success looks like for them, and her latest film explores the intersection of economic inequality and gender. “We have to have these national conversations,” Newsom told TIME in a previous interview. “And given the fact that we create culture, it’s up to all of us to recreate a healthier one.” 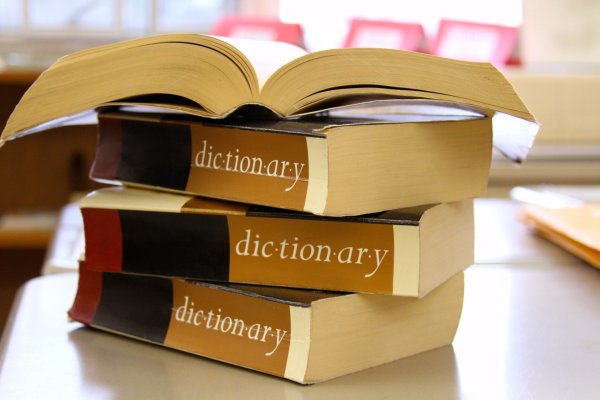 Dictionary Reveals Biggest Search Trends of 2018
Next Up: Editor's Pick