But when the shutdown ends, it will likely be the handiwork of the leader who’s stayed offsides: Senate Majority Leader Mitch McConnell.

The Kentucky Republican — who boasted in 2014 that he was “the guy that gets us out of shutdowns” — has a long record of cutting the Gordian knot of legislative gridlock, especially, like now, when it’s a crisis of the GOP’s own making. He’s been conspicuously absent from the impromptu Republican press conferences lambasting Democratic intransigence, preferring to give his thoughts in brief speeches on the Senate floor while he works behind the scenes to find a way out.

But his biggest obstacle may prove to be the president.

On Thursday, McConnell summoned a handful of fellow Republicans to his ornate offices to brainstorm a solution. The group, which included Sens. Lisa Murkowski and Rob Portman, dispatched Senate Appropriations Chairman Richard Shelby to give Vice President Mike Pence what aides described as a “skeleton” of a plan to re-open government and return to paying 800,000 federal workers.

“We aren’t there yet,” cautioned a top Senate Republican aide. They didn’t get there, either.

A short time later, Pence’s team phoned back. The deal, which would have re-opened the government and given the green light to congressional committees to sort out the border spending later, was a non-starter with the President. The Senate recessed shortly after 2 p.m. and Senators left Washington for their home states. Absent a dramatic reversal from the White House, the shutdown was set to continue until at least Monday, which would make it the longest in U.S. history.

So McConnell returned to the drawing board, no closer to end the shutdown but not exactly in a rush to take ownership of the crisis, either. So far, there have been 19 full days of airport security working without pay, the Secret Service ferrying the President to and fro without knowing where the next paycheck will come from, national parks going without rangers and the Coast Guard suggesting its team start babysitting to pay rent. The situation has been a bruising setback for Washington, but especially Republicans who are being blamed for the standoff, according to polls.

For their part, Democratic deal-makers in the Senate say they’re ready to talk, but thus far haven’t seen much sincere outreach from across the aisle. The Senate’s savviest immigration negotiator, Sen. Dick Durbin of Illinois, remains on the sidelines.

But McConnell, who alone controls the Senate floor, recognizes the White House’s demands are not likely to bend, and without the possibility of a presidential signature he feels there’s little point in passing bills to re-open the government just for show. Trump has declared that he would not re-open government unless he gets billions of dollars to build a barrier on the U.S.-Mexican border. Democrats, now in control of the House, are standing firm against that and instead have offered piecemeal measures to fund the government without building the wall. McConnell has told colleagues and the White House that he will not bring the House-passed funding to the Senate floor because he is told Trump would veto it.

“I think the way out of this has been apparent for several weeks,” he said Thursday. “It requires an agreement between a Democratic House, the Democrats in the Senate and the President.” Notably absent? The Republican majority in the Senate, which cannot pass anything of substance without at least 60 votes to clear a procedural hurdle. (Trump has suggested McConnell throw out the rules requiring that 60-vote requirement; McConnell has dismissed that idea.)

Still, McConnell recognizes things are getting bad. Personally, he is indifferent to the necessity of the wall, which Trump promised during the campaign, but he recognizes the politics of it can be helpful for firing up the GOP’s hardline base. In 2020, McConnell’s fellow Republicans will be defending 22 seats, and many of them are in states that may prove tricky, like Arizona and Colorado.

At the same time, McConnell and his like-minded pragmatists see peril in openly contradicting the President. McConnell himself faced a spirited challenge in his 2014 primary from the right, and any members of his caucus who defy Trump could draw a similar Republican opponent. Already, McConnell is fighting a challenging battle in 2020 against Democrats, who will be defending just 12 seats in the Senate and are presume to have the added benefit of a presidential nominee who builds an aggressive political machine that can help down-ballot comrades. Trump fears his own prospects would be weakened if he cannot, at the end of four years in power, deliver some incarnation of a border wall to his fervent base.

All of which helps to explain why McConnell has stayed on the sidelines, tending to his caucus, which is frustrated but, at least so far, disciplined. McConnell is using Shelby and the newly promoted No. 2, Sen. John Thune of South Dakota, to talk with the White House, which has shown little warmth but plenty of fearful respect toward McConnell. And McConnell has shown deference to the Oval Office team, pledging not to bring any bill to the floor that the President would veto.

Those close to McConnell argue he is irked that the House continues to send him piecemeal measures to reopen the border. “The political stunts are not going to us anywhere,” McConnell told colleagues from the Senate floor.

But it’s not just Democrats. Trump summoned leaders to the White House this week, only to reportedly smack the table in frustration and storm from the room, only to be followed by a trip aboard Air Force One to Texas to inspect the border himself. Neither, McConnell’s team argue, is particularly helpful in getting to yes in these negotiations. Maybe, though, that’s not the point. Maybe the point is a stalemate that Trump alone can fix. Or maybe Trump thinks the fight itself will prove enough for his base.

Either way, the only way the showdown will end is if Trump can assure McConnell he won’t be left holding the bag. Once again, the Senate majority leader is at the quiet center of it all. He doesn’t need televised addresses or border visits or press conferences to get his way. And in Washington, that’s its own kind of power. 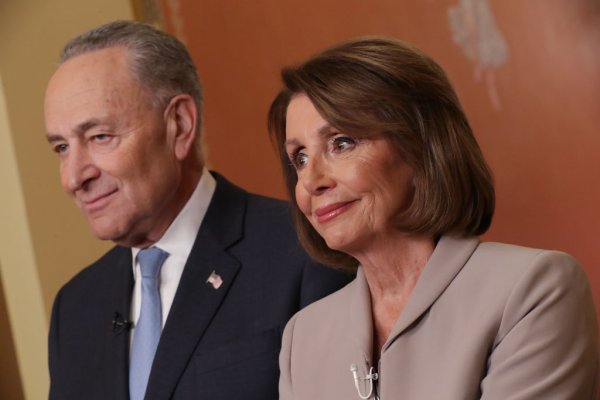