A pair of Russians indicted by Special Counsel Robert Mueller for meddling in the U.S. elections of 2016 were involved in a plot that led to the murder of three Russian journalists in Africa, according to a private investigation funded by the journalists’ former employer, the exiled Russian oligarch Mikhail Khodorkovsky.

Data revealed by Khodorkovsky at a briefing in London on Thursday suggests that several Russians linked to Evgeny Prigozhin, a powerful ally of President Vladimir Putin, conspired to lure the murdered journalists into an ambush on a country road in the Central African Republic, where they were shot dead on the night of July 30. Among those implicated in the investigation was Mikhail Burchik, who was indicted alongside Prigozhin last year for allegedly interfering in the U.S. presidential elections.

The investigation into the journalists’ murder apparently relied on data from cell phone towers in Africa and what appears to be private communications between several of the Russians involved. When asked how they had obtained this data, the team of investigators said they had paid for it, but refused to disclose where or how they purchased it.

TIME was not able to verify the investigators’ findings independently on Thursday. Prigozhin did not immediately respond to a request for comment. The Russian Foreign Ministry has said the death of the three journalists was the result of a robbery gone wrong. Contacted on Thursday, a spokeswoman for the ministry declined to comment on Khodorkovsky’s allegations in detail, saying only that Russian law enforcement agencies are still working on the case of the murdered journalists. “The investigation is ongoing,” she said.

Khodorkovsky, a wealthy and outspoken opponent of President Putin, told TIME in an interview last month that his investigation would disprove the Russian government’s claims about the murders. After outlining the results of the investigation on Thursday, he told reporters, “These facts don’t leave any room for the theory that this was a simple robbery.”

The three murdered journalists—conflict reporter Orkhan Dzhemal, documentary filmmaker Alexander Rastorguev and cameraman Kirill Radchenko—arrived in the Central African Republic in late July to work on a film about Russian private military contractors, whose operations across Africa have intensified in recent years.

With funding from Khodorkovsky, the journalists focused in particular on the mercenary outfit known as the Wagner Group, which has been identified in Russian and Western media as part of Prigozhin’s business empire. In June 2017, the U.S. government imposed sanctions against the Wagner Group, alleging that it had “recruited and sent soldiers to fight alongside separatists in eastern Ukraine.” Prigozhin has denied having any links to private military contractors.

The office of the special counsel, which is investigating Russian involvement in the U.S. elections of 2016, indicted Prigozhin and a dozen of his associates in February of last year. The indictment accused Prigozhin of running an elaborate scheme to manipulate American voters through fake social media and political advertisements, many of which sought to promote the candidacy of Donald Trump.

According to that indictment, one of the key managers of that scheme – allegedly responsible for its “operational planning, infrastructure and personnel” – was a 32-year-old named Mikhail Burchik. (Burchik has dismissed the accusations as “a joke” and “nonsense.” When TIME contacted Prigozhin about the indictment earlier this year, his representative said he does not speak to the media “on principle.”)

Both Prigozhin and Burchik figured prominently in the investigation that Khodorkovsky presented on Thursday. According to its findings, Burchik was involved in an apparent cover-up of the triple murder, while Prigozhin was accused of paying the people who allegedly orchestrated it. Burchik could not be reached for comment on these allegations.

Among the alleged masterminds named in the investigation was Alexander Sotov, a Russian military instructor working in the Central African Republic. On the days leading up the murder, Sotov was in frequent contact with a member of that country’s gendarmerie police force, Emmanuel Kotofio, who was allegedly conducting surveillance of the three journalists and tracking their movements, according to cell phone records and other evidence presented by Khodorkovsky. (Kotofio did not respond to a request for comment on Thursday. Sotov could not be reached for comment.)

The cell phone data also allegedly shows that Sotov was in close touch around that time with Valery Zakharov, a former Russian intelligence officer who currently serves as a security adviser to the President of the Central African Republic. Zakharov has denied having any involvement in the murder of the journalists last summer, and has stuck to the Russian government’s line that they were killed in a botched robbery attempt.

In an interview with the Daily Beast last month, Zakharov also sought to defend Moscow’s increasing presence in the Central African Republic, which has included weapons shipments and training for the local police and military personnel. Back in Soviet times, he said, “We helped build this country’s infrastructure. There were Russian teachers in the schools and Russian doctors in the hospitals.” After a pause, he added, “And now we are back.” 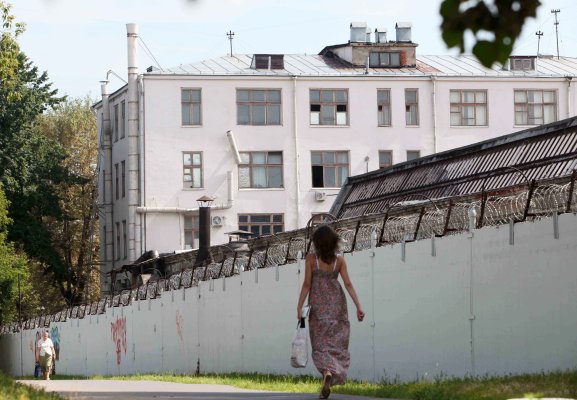 American Held in Russian Prison With Dark History
Next Up: Editor's Pick