There Is a Crisis at the Border. It's Not the One Trump Is Describing

President Trump stood on the edge of the Rio Grande in McAllen, Texas, on Thursday and looked at Border Patrol vehicles, bales of marijuana seized from smugglers and a Border Patrol helicopter flying over the water with agents hanging out the open doors.

“They need a barrier. They need a wall,” he said. When a reporter asked if Trump had plans to visit a nearby detention center where families are being held, Trump said he wasn’t sure what is on his schedule and would have to ask the Secret Service. “But I would,” he said. “That’s not a bad idea.” Trump left Texas an hour later without visiting a detention facility.

In doing so, he missed seeing what amounts to the real border crisis. And it’s not one a wall — whether made of steel or concrete — will fix.

The number of families and children arriving at ports of entry and illegally crossing the border to ask for asylum has more than doubled in two years. An average of 31,188 families and minors traveling alone were apprehended on the southwest border this fall, according to Customs and Border Protection figures, an increase of 136% over the average of 13,210 such migrants apprehended during the 2017 budget year. Three out of four of those migrants came from Guatemala and Honduras, two countries facing dangerous street violence and struggling economies. The annual number of asylum seekers has spiked to more than 97,000, a nearly 2,000% increase over the level in 2008, when fewer than 5,000 people apprehended by border agents expressed fear of returning home.

The surge has overwhelmed Border Patrol agents and immigration officers not accustomed to apprehending so many children and having to house them in facilities poorly suited for holding families and kids. Two children, both from Guatemala, died in December after being apprehended by U.S. border officials. And the Trump Administration, after coming under fire for separating at least 2,500 children from their parents in May and June of last year, is holding more families together, but that means it is running out of detention space as families continue to arrive at the border.

While Trump talks more about the unsecured portions of the border, many of the families seeking asylum have showed up at legal ports of entry in order to present themselves to Border Patrol agents. In the past, they were released with a notice to appear in court while their claims were considered, but it could take years for a judge to get through a backlog in cases, which meant they were allowed to live and work in the U.S. in the meantime. The Trump Administration, which sees this as a loophole, has asked for more resources to hold families while their cases move through the system.

But this is not the crisis that Trump has been talking about in his visit to the border, his tweets or his impromptu press conferences in the weeks since the partial government shutdown began. Instead, he’s returned to the familiar rhetoric of crime and violence from his 2016 campaign and his campaign promise to build a border wall. In his Oval Office address, on Tuesday, the president described the southern border as a “pipeline for vast quantities of illegal drugs, including meth, heroin, cocaine and fentanyl,” even though most of those drugs are smuggled through ports of entry and not across the unwalled sections of the border.

As the partial government shutdown, now the second longest in history, continues, Trump has repeatedly floated the idea of declaring a national emergency in order to gain the authority to build the wall, a move that would spark a court challenge.

“We can declare a national emergency. We shouldn’t have to because this is common sense,” Trump said Thursday. “It’s not about politics for me. It’s about doing the right thing.”

But the president’s intense focus on a border wall has steered the debate away from the very real problems Border Patrol agents are facing with the influx of families, as well as the potential solutions. Experts say the problem could be addressed by giving asylum officers more authority to quickly resolve requests, hiring more immigration judges and investing more in improving conditions in the Central American countries people are fleeing. (Trump has threatened to cut aid, instead.) Unlike the wall, those are subjects where Democrats might be more easily able to find a compromise with Trump as well without upsetting their base.

Doris Meissner, who was commissioner of the U.S. Immigration and Naturalization Service from 1993 to 2000 and is now a senior fellow at the Migration Policy Institute, says those problems might be even cheaper to address than the $5.7 billion Trump is demanding for a border wall, and they would address a genuine crisis.

“I think there is a degree of crisis, but it’s a crisis in the asylum system,” she says. “It’s a weakness that is not going to be solved by a wall.”

“What Trump is doing is fighting yesterday’s war,” she added.

Even advocates for reducing immigration to the U.S. such as Mark Krikorian, executive director of the Center for Immigration Studies, say the most “pressing crisis” is the uptick in arrivals of families from Central America on the border. He has doubts that the wall will fix his concerns with America’s immigration system. 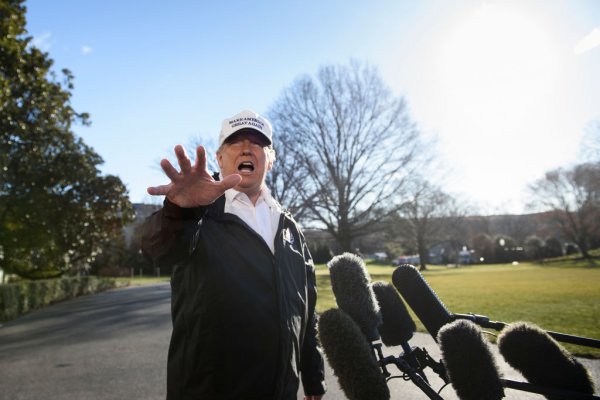 Trump Denies He Said Mexico Would Pay for the Wall
Next Up: Editor's Pick