The internet can be a strange place, and when it comes to viral videos, anything can happen. For “Baby Shark,” a music video for kids uploaded to YouTube by South Korean educational brand Pinkfong two years ago, patience is paying off. “Baby Shark” has become an internet sensation, with a viral challenge, a line of merchandise and now even Billboard chart status.

What is “Baby Shark?”

“Baby Shark” is an educational song — and, if you like, also a dance — that has grown in popularity after it was shared on YouTube two years ago. Now, it has over 2 billion views and has spawned something of a fan base.

“Baby Shark” itself is a simple enough video two-minute video: an animated background shows a family of sharks, while two kids act out the lyrics and sing as the song progresses. We’re introduced to the baby, mom, dad, grandma and grandpa sharks — and then it’s time to hunt and seek shelter. A decent lesson for kids, in any case. Its allure lies in a ferociously catchy tune and very, very simple lyrics. After all, it’s for kids.

The current viral version of the song and video are the product of Pinkfong. The education app gets a 4.2 star rating in Apple’s App Store. (There’s also a standalone Baby Shark app, which is just at 3.8 stars.) On YouTube, they have over 14 million subscribers for their brand of bright, bubbly videos. Like the popular “Baby Shark,” their content is geared towards helping young kids sing along with lyrics and easily replicated dance moves.

“Baby Shark” has been around for a while. The rough outlines of the tune and subject existed as a nursery rhyme in Germany and France for decades; it even had modest success as a German techno remix and as a popular camp song over the years, as Mel magazine has discovered. One kids’ musician, Johnny Only, even posted a video with choreography of the song back in 2011. The New York Times reports that Pinkfong first adapted the song to their uses back in 2015, after which it was remixed with the catchy beat we hear today. This rendition of “Baby Shark,” which a Pinkfong representative called an update on a “traditional singalong chant,” became popular in South Korea and parts of Asia before it made its way West.

How did “Baby Shark” get to the Billboard chart?

Since Billboard counts digital sales and online streams in the calculus for its charts, “Baby Shark” managed to make the cut: it has over 50 million Spotify streams to date, for instance. And while those are weighted more heavily than free YouTube views, the fact that it is one of that platform’s 30 most viewed videos to date also helped it out in its journey to the charts. A number of celebrity renditions also spread it around, including a performance on the X Factor U.K. last month and reenactments from Ellen DeGeneres and James Corden on their shows earlier in the fall. From there, it was just a matter of time before it became ubiquitous and racked up enough streams and views.

For the week of Jan. 12, the song debuted at a very respectable #32 on the Billboard Hot 100, sitting just below Lady Gaga and Bradley Cooper’s “Shallow,” Khalid’s “Better” and Luke Combs’s “She Got the Best of Me.” This position qualifies it as a highest-ranking debut for a new artist; not bad at all for a kids’ song.

What is the “Baby Shark Challenge?”

Pinkfong encouraged viewers to participate in a #BabySharkChallenge, sharing their own videos dancing along to the tune. It caught on amongst celebrities like DeGeneres and Corden, giving the video the extra oomph it needed to go viral. Now, you can find all kinds of people — famous and non-famous alike — sharing their version of the Baby Shark dance online, on apps like TikTok and platforms like YouTube. And that’s how a chart hit gets made. 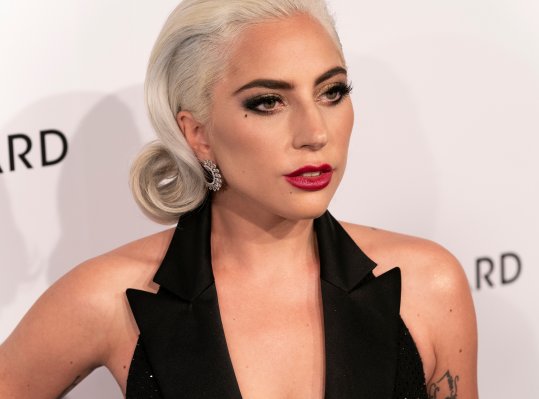 Lady Gaga Apologizes for Working With R. Kelly
Next Up: Editor's Pick