Trump Said 'If There's a Concrete Wall in Front of You, Go Around It' in a 2004 Speech and People Are Starting to Notice

The plan to build a wall along Mexico’s border was a cornerstone of Trump’s campaign that he and other administrators have been pushing for in recent weeks.

But back in 2004, Donald Trump had a very different take on “walls,” or metaphorical ones at least.

In a commencement speech unearthed by the Daily Show on Wednesday, Trump – who was accepting an honorary degree from Wagner College in Staten Island, New York – advised graduates to find a way around any wall they encounter in their future.

“I’ll tell you, to me, the second-most important thing after love what you do is never, ever give up,” Trump said. “Don’t give up. Don’t allow it to happen. If there’s a concrete wall in front of you, go through it. Go over it. Go around it. But get to the other side of that wall.”

The speech showed little sign that 12 years later, he would be elected president – and that two years into his presidency, he would push to build a wall in exchange for ending the government shutdown, which has become the second longest in history.

As he introduced a clip of the speech, host Trevor Noah made the case that it all just proves that Trump knows that walls aren’t infallible.

“If there’s one thing we know, it’s that nothing will stop immigrants from trying to come to America,” Noah said. “This is a place that people dream of coming to, because people trying to make a better, safer life for their families will do anything to achieve that dream.”

At the time of the commencement speech, Trump’s life was radically different than it is today. He was celebrating the success of his new television show, The Apprentice.

A faculty member introduced him by saying, “He is brash, demanding, sometimes boastful, but at the same time candid, insightful and supremely confident. Nothing second best.”

In his speech, Trump acknowledged the success of his television show, and joking, “So here I am, I’m a star. And there’s nothing like it. It beats real estate all the time.”

He also offered the graduates different tidbits of advice, including to “give all you’ve got” to your career; to “study something every day”—and to make sure they take out a prenup when they get married.

He also advised students not to follow in his path.

“Don’t live on the edge like I do. You don’t need it. You want to have a nice normal life, folks, ok? 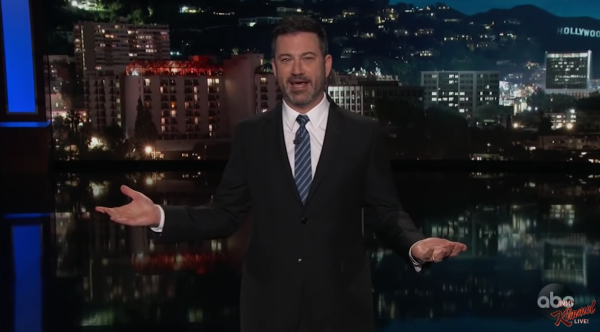 Jimmy Kimmel Has Some Advice for Trump's Border Campaign
Next Up: Editor's Pick