President Trump Went to a Border Town to Prove They Need a Wall. Residents Say Otherwise

President Trump spent Thursday in McAllen, Texas attempting to make his case for a border wall, but members of the Texas Border Coalition — including McAllen’s mayor — say an investment in a wall is the wrong choice.

On Thursday, Trump hosted a roundtable at a McAllen Border Patrol station with Secretary of Homeland Security Kirstjen Nielsen, local law enforcement officers and local officials including McAllen Mayor Jim Darling. Displayed in front of the President was a table filled with seized contraband, which included over $300,0000 in cash, “gold-plated and diamond encrusted” machine guns and large amounts of methamphetamine and heroin. U.S. Customs and Border Patrol (CBP) agents pointed out all of the items were spotted or apprehended at various legal ports of entry and checkpoints, including Laredo POE.

CBP officers also showed Trump blown-up photos of tunnels that were dug to get guns and drugs across the border. Neither border patrol agents nor President Trump explained how a border wall would help stop the flow of drugs through tunnels and legal ports of entry.

McAllen Mayor Jim Darling, who is not affiliated with a political party, tells TIME that even if it was not Trump’s intention, the roundtable appeared to make the case for increased funding at legal ports of entry instead of the wall.

“I thought that showed that ports of entry are working,” he says. “I understand he’s trying to make a point, I’m a little theatrical myself, most politicians are. I understand that, I understand why someone would say ‘Okay, those were all confiscated at the point of entry, so what’s that gotta do with people crossing the river?'”

Darling says he was glad that the President expanded on the concept of a “wall” by mentioning it could include further investments in areas like infrastructure and technology.

“You know it was kind of interesting, today the President said, ‘When I’m talking about a wall, I don’t just mean a wall,’ and I thought metaphorically that was true, but it was nice to hear him say that,” Darling says.

He says Trump mentioned that roads, infrastructure, and technology, along with what the President has deemed a humanitarian “crisis,” was a new approach to the wall situation: “It was good that the discussion was being had.”

Darling says he does not know where the mentioned investments in infrastructure fall in the $5.7 billion in funds the President is requesting for the wall: “He had to flesh that out, you presume from his presentation it is there somewhere but I’ve never seen that, it’s always been just the wall.”

Meanwhile, Julie Hillrichs, spokeswoman for the Texas Border Coalition, a group of border mayors (including Darling), county judges and border communities focused on issues that impact border quality of life for more than 2.5 million people, tells TIME the Coalition believes the real way to increase security at the border would not be a wall, but increased investment in the legal ports of entry that already exist in their area.

“We have never supported the wall,” Hillrichs says. “The Border Coalition has consistently over the years stated we believe the wall is a wasted investment.”

Trump’s demand for $5.7 billion in funding for a border wall is at the center of the partial government shutdown. During his Oval Office address to the nation on Tuesday, Trump characterized the situation at the border as a “growing humanitarian and security crisis.” Trump claimed that Americans were being put at risk by the influx of illegal immigrants and drugs pouring across the border, despite statistics showing there has been a decrease in people caught crossing the border and most drugs that are smuggled into the country come in through legal ports of entry.

Top congressional Democrats have declined to allocate funds for Trump’s wall, arguing that Trump is manufacturing a “crisis,” and talks to end the shutdown have stalled.

Darling tells TIME he also takes issue with the situation at the border being described as a “crisis.”

“We don’t feel a crisis in our city,” Darling says. “That’s one of the problems with just saying there’s a crisis on the border: It affects border towns. We’re a vibrant area. McAllen is the safest city in the state of Texas, and we’re right on the border, so that kind of rhetoric resonates and sells newspapers, but it hurts our area.”

“I want to emphasize all the discussions about danger and crisis … We live day to day in a very safe community and all our people feel that way. We had no murders last year in a city of 150,000,” Darling adds.

Residents and leaders in the community say they are looking for real solutions for immigration. McAllen, located in the Rio Grande Valley, is home to 143,000 residents, and houses the country’s largest immigration processing center: U.S. Border Patrol Central Processing Center — also known as “Ursula.”

Residents are making their thoughts on Trump’s visit known in unconventional ways.

Guerra tells TIME that he felt an obligation to share the statistic to get a message across about how he says the majority of the community feels about the notion that the city is dangerous.

“We’re about eighty-five percent Hispanic in the Rio Grande Valley, so I think we have a decent poll of what a majority of the people feel like,” Guerra said. “Unfortunately, we had to put that sign up just to start a conversation: Is this so bad that we have to shut down the government? Are people going amok in our backyards? They’re not.” 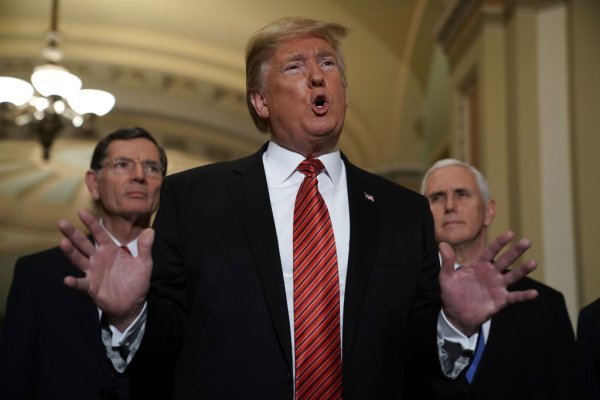 Our Lawsuit Against the Trump Administration Revealed How It Lies About Terrorism
Next Up: Editor's Pick