(Bloomberg) — President Donald Trump’s decision to abruptly storm out of a meeting with congressional leaders on Wednesday shocked some on Capitol Hill. But those who have done business with him recognized it as one of his trademark negotiating tactics.

Long before he entered the White House — where the latest turn on his heel occurred — Trump was known to have done the same thing when a deal wasn’t going his way. He even walked out of a judge’s chambers during divorce proceedings.

His dramatic exit on Wednesday, however, appeared to gain him little traction with House Speaker Nancy Pelosi and other Democratic lawmakers who attended the Situation Room meeting. She called Trump’s approach to the shutdown talks “pathetic,” and Senate Minority Leader Chuck Schumer said the president had thrown a “temper tantrum,” slamming the table before walking out.

Trump on Thursday tweeted that Schumer “told his favorite lie when he used his standard sound bite that I ‘slammed the table & walked out of the room. He had a temper tantrum.”’ Trump said he “politely said bye-bye and left, no slamming!”

But, according to Jay Goldberg, who was Trump’s lawyer from 1989 to 2014 and handled two of his divorces, the president has reason to believe that walking out could be effective.

“He crafted that approach, it’s one he owns,” Goldberg said. “He has a tendency to argue, and if he is not satisfied he will leave the room, disappear, doesn’t come back and the people are on edge wondering where he is. And then when he feels it is the appropriate time he comes back.”

Goldberg said that Trump once attended a protracted meeting to reach a divorce settlement with his first wife, Ivana Trump. After hours of talks, he disagreed with the amount of alimony she wanted, and the two sides couldn’t agree. So Trump stood up and left.

“Everyone was looking for him because without his presence a deal couldn’t be done and he was gone for two hours and we didn’t know where he was,” Goldberg said. “When he came back, the other side was so concerned if they didn’t make a deal he would walk away again.”

In another episode during the divorce case, Trump walked out on a judge he thought had made an unreasonable request and didn’t come back, rattling the judge and lawyers from both sides, Goldberg said.

Trump’s approach to the current standoff with congressional Democrats -– in which he is refusing to sign off on funding to reopen much of the government until Democrats give him $5.6 billion to pay for a wall at the Mexican border -– may be viewed through the same lens.

Read More: Traders Bet Trump Will Get Along With Everyone After Midterms

While Pelosi and Schumer stood aghast outside the White House in the windy chill after Trump abruptly ended their meeting, the president was inside, tweeting: “Just left a meeting with Chuck and Nancy, a total waste of time. I asked what is going to happen in 30 days if I quickly open things up, are you going to approve Border Security which includes a Wall or Steel Barrier? Nancy said, NO. I said bye-bye, nothing else works!”

Dick Durbin, the Senate’s No. 2 Democrat, who also attended the meeting, said he suspected that Trump thought the lawmakers would stay in the room and negotiate with Vice President Mike Pence. But they followed his lead — and left.

“It was pretty clear his heart was not in it,” Durbin said. “I think he’s getting impatient.”

Goldberg thinks the president was merely employing a signature ploy from his New York days.

Trump has not exactly kept the tactic a secret. “Negotiations 101: The best deals you can make are the ones you walk away from . . . and then get them with better terms,” he said on Twitter back in May 2014 before his 2016 bid. 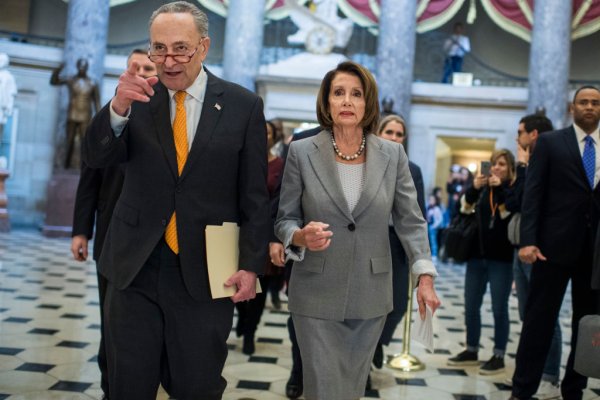 'I Said Bye-Bye.' Trump Walked Out on Top Democrats
Next Up: Editor's Pick