How A Star Is Born's Music Hit the Sweet Spot

There’s a moment in “Shallow,” the standout single from Bradley Cooper’s A Star Is Born, where Lady Gaga lets go and just roars. It’s chill-inducing to hear for the first time in the movie, as Gaga’s ingenue Ally takes the stage alongside Cooper’s grizzled rocker Jackson Maine, but it sounds just as good playing on the radio, where it’s been in heavy rotation for the past three months. You could argue that it’s that big, cathartic bellow that’s set Gaga, Cooper and their collaborators on a straight path to world domination. Really good soundtracks don’t come around all that often—but when they do, they mark the fastest way to rule the worlds of both film and music in one fell swoop and earn serious award gold along the way.

Which is exactly what A Star Is Born has done. The film has handily beaten the domestic box-office numbers of live-action musicals like La La Land and Les Miserables, raking in nearly $400 million globally. Meanwhile, the certified-platinum soundtrack topped the Billboard chart when it debuted in October, besting recent soundtrack records, knocking down releases from popular artists like Lil Wayne and even topping Gaga’s own previous chart successes as a solo artist. At the 2019 Golden Globes, Gaga and her co-writers took home the Best Original Song trophy for “Shallow,” teeing her up nicely for an Academy Award nomination.

A murderer’s row of musical talent—from rocker Lukas Nelson to English musician and DJ Mark Ronson to country singer-songwriter Jason Isbell—helped build that soundtrack. After watching Nelson perform onstage with Neil Young, Cooper tapped the artist for assistance; Nelson ended up overseeing the movie’s sound and helping Cooper fine tune his character. His band Promise of the Real even became Cooper’s backing group on screen. “He liked the camaraderie,” Nelson says of Cooper’s preference for a band instead of actors. “It’s real, it’s authentic, and people gravitate towards that in life.” That spills over into the music, which Nelson thinks is resonating because of the “organic” sound—a departure from much of contemporary pop radio.

Grammy-winning artist Isbell, a self-described “hard critic,” was initially wary of working on the movie. But he signed on after reading the script. “There was something honest and human about the story,” he says. “There was nothing that made me cringe.” Plus, he had faith in the other artists involved, from Nelson to Ronson to Lady Gaga herself. “It led me to believe there would be a legitimacy to the music,” he says. Isbell ultimately wrote “Maybe It’s Time” for Cooper, a tender, acoustic lullaby that is, appropriately enough, about grappling with change.

But the soundtrack’s popularity still probably comes down to Gaga, who is one of the decade’s most chameleonic artists. Her big-screen debut guaranteed a passionate built-in audience, and she sounds equally at home on the rootsy rock that Ally sings at the beginning of her career as she does on the sleek synth-pop that she performs as she progresses. Yet Gaga’s last album, the folksy, back-to-basics Joanne, underperformed commercially; for some, that persona proved too much of a departure. A Star Is Born reminded viewers of the powerhouse performer that she’s always been within the context of a new character. Plus, there’s her voice. “To have a voice like that in a song that you write is a dream come true,” says songwriter Natalie Hemby, who contributed to Ally’s two big emotional solos—both being put forward as Oscar contenders alongside “Shallow.”

Soundtracks have been big business for a while, of course—and an important vehicle for established singers to make a mark in the world of film, as Gaga is now doing. In 1992, Whitney Houston’s role in The Bodyguard saw her turn in two iconic performances with “I Will Always Love You” and “I Have Nothing,” bringing her to triple-threat status. That album remains the best-selling soundtrack of all time. More recently, movie musicals like Dreamgirls and The Greatest Showman have landed top-selling songs and Oscar appreciation. Even action films like Black Panther, Suicide Squad and Furious 7 have spawned chart hits, like Wiz Khalifa and Charlie Puth’s blockbuster “See You Again,” which helped launch Puth’s career.

But A Star Is Born’s level of cultural saturation is unusual, as the film and its cast continue to get memed in real time on their march toward Oscar night. It’s paying off not just for Gaga as she makes her pivot to movie star, and Cooper as he makes his mark as a director, but also for everyone involved in the soundtrack. “In some way, we were plucked from obscurity,” Hemby says of the team assembled for the music. “We’ve all had success in our different ways, but we were given this chance to shine.” Just as Jackson Maine set Ally up for her chance at stardom, this soundtrack is giving a slew of artists a very good shot at real-world gold. 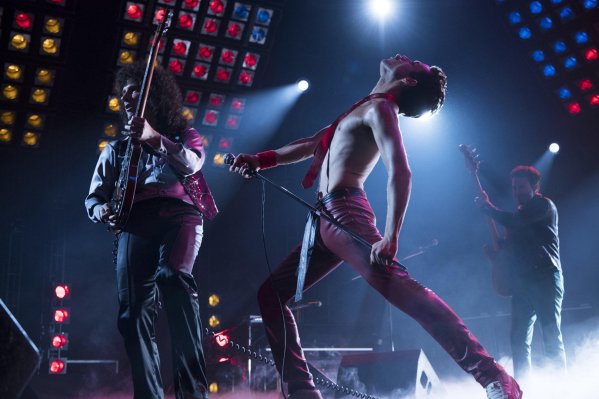 We Can’t Talk About Bohemian Rhapsody Without Talking About Bryan Singer
Next Up: Editor's Pick