‘No one is in a position to dictate to the Chinese people what should or should not be done.’ - Xi Jinping, Chinese President
China News Service/VCG/Getty Images
By Justin Worland

The ongoing trade war between the U.S. and China may seem chaotic, with twists and turns to flummox even the most seasoned analysts. But in the year since President Trump announced his first tariffs, his Administration has really pursued only one central strategy: weaken China’s economy in order to force the country to change its trade practices.

In some ways, the strategy has worked. China’s economy had already showed signs of slowing before the first tariffs hit, and the face-off with the U.S. has accelerated that trend. Economic growth in China sank in the third quarter of 2018 to its lowest level since 2009, and analysts say that situation could worsen if the trade tensions don’t end. “China is not doing well now,” Trump said on Jan. 4, an assessment experts say is largely right. “It puts us in a very strong position.”

But China’s slowdown has also put some of the U.S.’s most important industries in economic limbo. And no company’s trade challenge is more telling than Apple’s. The tech giant, which for a time last year ranked as the world’s most valuable company, cut its revenue projections on Jan. 2, saying that trade tensions had hit its bottom line.

The iPhone, which accounts for 60% of Apple sales, is at the heart of the issue. In China, the product is significantly more expensive than those of homegrown competitors like Huawei, and buying the fancy American version ranks low on the list of priorities for many Chinese consumers who are tightening their belts. “We anticipated some challenges,” Apple CEO Tim Cook wrote in a letter to investors. “We did not foresee the magnitude.”

The company’s stock dropped nearly 10% following the news, and analysts ramped up speculation about whether the company could count on China, its third largest market, to keep its long-term outlook bright. “If that market collapses, it’s going to bring down the global market,” says Ryan Reith, a vice president at the International Data Corp., a market-intelligence firm, who watches Apple.

The situation facing Apple underscores a simple reality. In an interconnected world, a range of American companies–from big tech firms to oil producers and everything in between–increasingly look to China to expand their bottom lines. And the more the country’s economy is battered, the more American firms will suffer the consequences. Indeed, the Dow Jones industrial average fell nearly 3% the day after the Apple news.

But not everyone seems all that concerned about the situation. Trump dismissed worries about the effect of trade policy on Apple, saying that the company is “going to be fine” and that he needs to “worry about our country.”

While the aggressive approach Trump has taken toward China may be clumsy, observers say it has brought a measure of force to negotiations. Talks between midlevel negotiators from both countries wrapped up on Jan. 9 with signs of optimism–including a celebratory Trump tweet before the round of negotiations had even concluded.

Indeed, China has already implemented a range of concessions, from removing key restrictions on U.S. auto companies to approving new kinds of genetically modified crops from the U.S. for import. Beijing has also offered to commit to buy more goods from the U.S., a move that would reduce the U.S. trade deficit, one of Trump’s chief talking points.

Still, those promises are a small piece of the trade puzzle between the two countries, and working through some of the more substantive issues will prove challenging. U.S. Trade Representative Robert Lighthizer, a China hard-liner, was picked to lead the negotiations, signaling a high bar for any potential deal. And because many of the Administration’s complaints cut to the core of China’s long-term growth strategy, hitting that bar may be hard. No matter how many concessions China offers, its leaders are unlikely to change course on carefully laid industrial plans to develop the country’s economy. Chinese President Xi Jinping said as much in a Dec. 18 speech anticipating negotiations: “No one is in a position to dictate to the Chinese people what should or should not be done.”

The countries have set March as the deadline to reach a new deal. Without one, higher tariffs on $200 billion in Chinese goods–tariffs that Trump had originally planned to implement in January–will go into effect. Meeting or beating that deadline would alleviate tensions that have contributed to growing unease across the globe, whereas failed negotiations could cause a backlash among business leaders and send markets tumbling.

“This President fashions himself being of business and for business,” says Ron Kirk, who served as U.S. Trade Representative under President Obama. “This would be a great time to sit down with those manufacturers, those business leaders.”

If a deal doesn’t come through and Trump refuses to change course, businesses may have to rethink long-term strategies. “We can’t change macroeconomic conditions,” Cook told investors.

Trump, however, can. Whether he wants to remains to be seen. 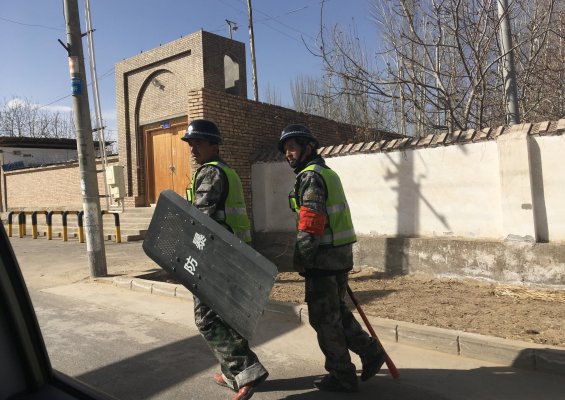