“You Can Only Tell So Many Dick Jokes.” Ken Jeong on Getting Serious in New Stand-Up Special

The Crazy Rich Asians actor on his past life as a doctor, his upcoming Netflix special and getting serious in stand-up

You perform to a room of mostly people of Asian descent in your stand-up special, You Complete Me, Ho. How did that affect the mood?

The special actively captures the electricity in the room. To have a predominantly Asian crowd that night, that doesn’t always happen. There was a loose feel to it. I never have a set order, but I knew where to add certain bits or improvise. What I love about stand-up is that you can just roll with it like jazz and see where it takes you.

The special has a lot of sincere moments, especially about your wife Tran Ho’s facing breast cancer. Is stand-up in a place where there’s room to get serious?

Yes. I wanted to do something very different from my old stand-up, which was joke-based. I wanted this to be real. That coincides with today’s stand-up comedy. Comics like Hannah Gadsby or Ali Wong exemplify how you can do deeply personal work in a stand-up format. It wasn’t like that 20 years ago.

There’s been a collective shift toward wanting more personal material.

It’s definitely for the better, because you can only tell so many dick jokes. You need something deeper to say.

You were a doctor before getting into comedy. How did coming from a normal day job shape your perspective on Hollywood?

I want to advance my career in show business, but it’s only worth doing if you truly love it. The Hangover was the otherworldly thing that changed my career from black-and-white to Technicolor and made me famous, but [the NBC series] Community taught me how to act. I look at it in two ways: Are you working, but also are you growing?

You give a shout-out to Kevin Hart in your special, saying he’s influenced your career. He’s been in the headlines recently for stepping down from hosting the Oscars after some people objected anew to some of his past tweets and hurtful comments about the LGBTQ community. Have you talked to him about this?

I have reached out to offer support as a friend. It’s true, he inspired me to get back into stand-up. In the current situation, he’s talked about evolving and learning, and I think that’s what this is about. Life changes your perspective. I’m confident Kevin is earnest on that path. Only he knows where that will take him.

Whoopi Goldberg floated your name as an Oscars host. Are you up for the gig?

The way I can make sense of it is that the success of Crazy Rich Asians is why I’m even being mentioned. The director, Jon Chu, calls it not a movie but a movement. And you know that movement is real when you have names like mine being bandied about.

You recently attended the Golden Globes, where Sandra Oh, who is of Korean descent, co-hosted and won an award. Are you optimistic about Asian-American representation?

Crazy Rich Asians showed that it’s profitable. But it’s just one story. Being at the Globes and seeing so many Asian friends there felt like how the gang from St. Elmo’s Fire must have felt back in the day, this cool clique of Asian-American actors who genuinely support each other. To have more Asian Americans at the forefront is the dream. We’re beginning to live that.

You’re a judge on The Masked Singer, a new reality singing competition on Fox. Why is it perfect for this moment?

The Korean version is my mom’s favorite show. Watching that, I found myself hooked. It’s just very addicting–a lot of surprises, and the format is made to make money. My mom is ecstatic. That’s my Sandra Oh–ish victory there. My dad is happy because I was a doctor, and my mom is happy because I’m on The Masked Singer. 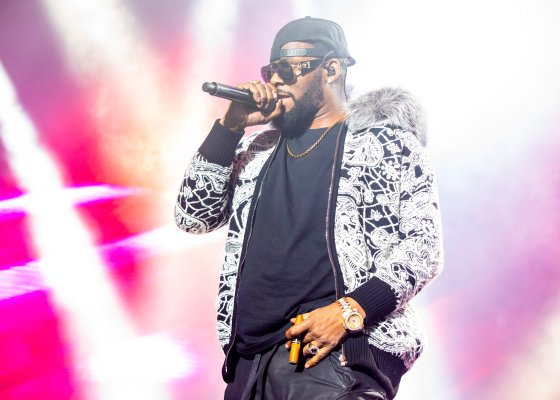 Investigators Want People With Allegations Against R. Kelly to Come Forward
Next Up: Editor's Pick