House Democrats Get Ready to Fight Trump. And Each Other

On the first day of the 116th Congress, newly elected House Speaker Nancy Pelosi declared a set of principles for divided government. For the first time, House Democrats have the power to investigate the Trump Administration, and Pelosi wanted to tell the nation her party would act responsibly. In a speech on the House floor, she emphasized trust, duty and bipartisanship. She quoted Ronald Reagan and paid homage to George H.W. Bush. And she did not once mention President Donald Trump.

The message did not last a day. That afternoon, Democratic Representative Brad Sherman took the floor and reintroduced articles of impeachment against Trump. Then, at a reception for the liberal group MoveOn.org that night, incoming Representative Rashida Tlaib greeted activists with a message very different from Pelosi’s sober promises. “We’re gonna go in there,” she announced to the cheering crowd, “and we’re gonna impeach the motherf-cker.”

It was exactly the tone Pelosi and her lieutenants were determined to avoid as the Trump presidency enters a new chapter, and top Democrats were apoplectic. “We couldn’t even make it 24 hours in the majority before we did something so transparently partisan,” complained a chief of staff to one House Democrat.

It’s not that Pelosi and her aides favor politesse over throwing punches; it’s about the effective use of newfound power. Interviews with five new House committee chairs and a dozen congressional aides and experts advising them reveal a broad and detailed Democratic plan to investigate the Trump Administration on everything from its deregulation of the financial-services industry to its family-separation policy at the U.S.-Mexico border and to pursue the ongoing probe into Russian meddling in the 2016 presidential election.

Pelosi and these top Democrats, as well as veterans of past House investigations, believe the appearance of partisanship will undermine the effort. “If they abuse those powers,” says former Representative Henry Waxman, who led the Oversight Committee during the George W. Bush Administration, “they will have no credibility.” And that, in turn, could jeopardize the Democrats’ chances for more political power down the road.

It’s a tricky balance. Democrats won the House last November by running on kitchen-table issues like lowering health care costs and prescription-drug prices. But the party also harnessed the enthusiasm of a base of voters who now want to impeach Trump regardless of the consequences. Pelosi and her team have to legislate, investigate Trump methodically and credibly, all while accommodating the demands of a restive Democratic base and some of their own colleagues.

How they manage that challenge will shape the balance of power in Congress and potentially the race for the White House in 2020.

On a Wednesday in October, with election victory in sight, Pelosi gathered a group of senior Democrats in her conference room on the second floor of the Capitol to formulate a plan for 2019. One by one, she asked the ranking members of top committees how they intended to investigate the conduct and policies of the Trump Administration.

Congressional oversight of the Executive Branch goes way back. Article I of the Constitution mandates, “All legislative Powers herein granted shall be vested in a Congress of the United States.” Because the law applies to everyone, including those in government, the clause gives Congress the authority to convene hearings and summon witnesses and to issue subpoenas and ferret out misconduct in order to effectively discharge its lawmaking responsibilities.

The first congressional investigation of the Executive Branch took place in 1792, after Major General Arthur St. Clair and his U.S. Army troops were defeated by Native American tribes in what is now Ohio. In 1795, Congress began compelling witnesses to give testimony. Subpoenas became routine in the first half of the following century.

Congress rarely performs its role as executive watchdog as diligently when one party has control of both branches. But Democrats say the GOP has been particularly lax during the Trump presidency. As ranking member of what is now called the House Committee on Oversight and Reform, Maryland Democrat Elijah Cummings sent 64 requests for subpoenas over the past two years to his Republican counterparts. None went out.

Republicans did send letters of inquiry to Trump Administration officials and members of the Trump Organization. But they didn’t follow up when there were no answers. Cummings’ first act was to re-send 51 of those letters from his Republican colleagues. “It’s a different situation now,” he said. “The American people have spoken.” Recipients of those letters included Trump attorney Sheri Dillon and Trump Organization executive George Sorial. They received requests about the company’s process for identifying payments from foreign governments and entities–part of a lawsuit Democrats filed alleging that Trump has violated the emoluments clause of the Constitution, which prohibits anyone holding public office from receiving foreign gifts or payments. White House counsel Pat Cipollone was asked to turn over documents related to staffers’ use of personal emails. Former White House chief of staff John Kelly was asked for documents outlining the security-clearance process.

In an interview in his new House office, still strewn with detritus from his recent move, the Judiciary Committee’s Jerrold Nadler laid out his top priority: protecting special counsel Robert Mueller’s probe. On the first day of the new Congress, Nadler introduced legislation to codify Mueller’s protection from termination. Even if it can’t pass the GOP-controlled Senate, Nadler has other ways to ensure that the nation finds out whatever Mueller learns. He says he will subpoena the Attorney General for Mueller’s final report if it is never publicized and, if necessary, bring in Mueller himself for public testimony. “I think it’s imperative that the Mueller report, when he issues it, be a public report,” he says.

Representative Adam Schiff, the new chair of the House Intelligence Committee, plans to continue the investigation into Russian meddling that his GOP colleagues dropped last year. Schiff is coy about what that will entail. “I don’t want to telegraph exactly what we’re looking at,” he explains, drinking an iced tea in the basement of the Capitol. But the Californian told TIME the committee might summon people like former White House strategist Steve Bannon, who asserted executive privilege when called before the committee last year. And the Russia investigation is not Schiff’s sole focus. Among other matters, he says, Intelligence will assess the legitimacy of President Trump’s claims that North Korea is on the path to denuclearization and examine the U.S. relationship with China.

The Democrats’ oversight power can be even more effective outside the Executive Branch. Representative Maxine Waters sent letters to executives at Deutsche Bank in 2017, demanding documents related to the Russia money-laundering scheme for which New York authorities assessed penalties of over $425 million in January 2017. Before she took over the Financial Services Committee, she was ignored. “Now that I am the chair,” Waters says, “we think we might encourage them to do a better response.” She also wants to explore former Trump campaign chairman Paul Manafort’s relationship with Deutsche Bank.

Even committees that don’t typically focus on oversight have found a role to play. Representative Richard Neal, chairman of the House Ways and Means Committee, may use his authority to request Trump’s tax returns from Treasury Secretary Steven Mnuchin. Frank Pallone, chairman of the Energy and Commerce Committee, plans to examine how the EPA has been trying to dismantle Obama-era policies. “A lot of that stuff he can’t actually do,” Pallone says.

All these probes match the wish lists of the Democratic base. In that sense, the House Democratic leaders’ plans dovetail with the hopes of their constituents. But there is a fault line running under the boldest step the party can take to check the President: impeachment.

Fully 77% of Democratic voters say they want President Trump to be impeached immediately, according to CNN exit polling from November. Representative Al Green has also brought forward an impeachment resolution that received 58 votes in December 2017 and noted at the time he was surprised by the level of support. “This is the first vote, but it will not be the last,” he said. The pressure on Democratic leaders to initiate impeachment proceedings will only increase as the investigations unearth new facts and the party’s 2020 presidential primary gets under way.

But House Democratic leaders are convinced that impeaching Trump without ample evidence–or even appearing eager to do so–would be a political disaster. In 1998, one month before House Republicans officially impeached Democratic President Bill Clinton, his party bucked a historical trend by picking up congressional seats in a midterm election. “We need to follow the facts,” Nadler wrote on Twitter the day after Tlaib’s comments. “I know [Tlaib] agrees.”

Even Waters, the only House Democratic committee chair who has publicly called for impeachment, has concluded that the Democrats shouldn’t rush into it. “We know the kind of work that has to go into impeachment,” she says. “Because we say that he’s eligible for impeachment doesn’t mean we think it should be done within 24 hours.”

Asked if he is preparing for the possibility of impeachment hearings, Nadler–who would oversee them if they occurred–described a three-pronged “test.” First, the wrongdoing must be an impeachable offense, which Nadler defines as an attack on democratic institutions and the rule of law. Second, the offense must be so grave as to require removing the person from office. Third, the evidence must be convincing enough that the public is behind it. “If the President perjured himself about his participation or somebody else’s participation in his connivance in trying to rig the election, that would be an impeachable offense,” Nadler explains. “If he perjured himself about a private sexual affair or about some business deal, that would not be an impeachable offense.”

Most of the caucus agrees with this methodical approach–at least publicly. But it won’t take too many comments like Tlaib’s for Republicans to paint the Democrats’ oversight efforts as politically motivated. That not only weakens the Democrat’s legislative efforts, Pelosi believes, but imperils the party’s re-election prospects. “I still believe our majority is fragile,” says Cummings. “They voted for us to be a check and a balance, but they also voted for us to stand up for their problems.”

To do that, though, the Democrats will first have to deal with their own. 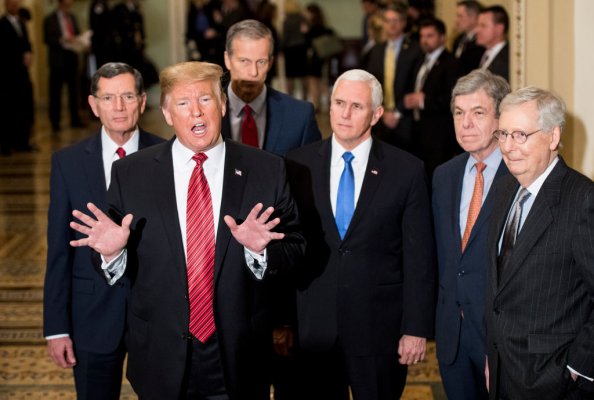 How the Shutdown Will Make Life Harder If It Drags On
Next Up: Editor's Pick