Trump and Pelosi Are Locked in Their First Battle. Neither Can Afford to Lose

A new year has dawned in Washington, and this is what it looks like: a partial government shutdown in its third week; a new Congress sworn in only to sit on its hands; an emboldened House Speaker Nancy Pelosi refusing to cede an inch; and an angry President Donald Trump abandoning negotiations to take to television and make the case for crisis measures. Federal offices and museums are shuttered. Trash is piling up in national parks. Airport-security personnel are working without pay. Recipients of housing aid are wondering if they’ll soon be evicted.

But step back from the sordid details, and you could hardly get a more accurate tableau of America’s new political reality: a nonfunctioning federal government whose leaders, each insisting the stakes are too high to budge, have retreated to their corners. At the center of the drama are the two towering figures whose clash will define the next biennium: Trump and Pelosi, the yang and yin of a divided America, two powerful leaders with their credibility on the line, both convinced they hold the winning hand.

Illustration by Jason Seiler for TIME

Also in this week’s issue:
The Shutdown Isn’t Really About the Wall. It’s About Trump’s Future
House Democrats Get Ready to Fight Trump. And Each Other
America’s Most Diverse Congress: Meet the Class of 2019

Neither can afford to lose. Trump has, after two years of distraction and delay, finally called the question of his signature policy promise, a wall on the southern border, which he insists must be a literal barrier made of concrete or steel. The wall is unpopular with the public and disdained by experts on both sides of the immigration debate. But the President is obsessed with playing to his hard-core base of supporters–and with his own self-image as a dominant alpha male–and caving would be an epic humiliation that could render him a premature lame duck and weaken his position ahead of a tough re-election campaign. Trump has been, if you will, pushed to the wall.

Pelosi takes up the first battle of her new speakership with a fired-up Democratic majority that saw the midterm results as a mandate to take on Trump and a repudiation of his stance on immigration, which he made the focus of in the election’s closing days. The San Francisco Congresswoman is legendary for her legislative savvy, having recently stamped out murmurs of dissent in her ranks. But that may be less of an asset with an outsider President who ignores traditional incentives. Trump has insisted that unpaid federal workers aren’t really bothered and even suggested he’d keep the government shuttered for months or even years. How does even the savviest negotiator deal with a President with such an unusual tolerance for conflict, uncertainty and the suffering of others?

The first Oval Office address of Trump’s presidency had the feel of a defensive maneuver. On the night of Jan. 8, he raced woodenly through a prepared text, sounding a familiar note: that migration from Mexico constitutes an urgent national-security threat. “This is a humanitarian crisis, a crisis of the heart and a crisis of the soul,” he intoned, as the camera zoomed in on his face. The President reportedly didn’t want to give the prime-time address, but his advisers convinced him that making the argument to the public was his best hope to shift the momentum of a fight he seemed to be losing.

The next day in the Senate, the President tried to make the sale to his own party, where cracks were beginning to show. The GOP leader, Mitch McConnell, had insisted that no bill to break the impasse would be considered without Trump’s endorsement. But purple-state Republicans had begun to voice public support for the Democrats’ position of reopening the government without allocating money for a border barrier. These Senators know that experts believe a physical wall isn’t feasible or effective on some areas of the border; that the wall has never enjoyed majority support in public opinion polls; and that illegal cross-border migration has dipped to historically low levels, replaced by a humanitarian crisis of asylum seekers hindered by the Trump Administration’s zero-tolerance policies, some of which courts have ruled unlawful. With the House in Democratic hands, the President can hardly afford an erosion of support in the Republican-controlled Senate.

Trump spent two years content to punt on the wall, sometimes telling his cheering crowds it was already under construction, sometimes declaring himself content with other solutions. This time, Trump could have pivoted from the dismal midterm result to a new posture of bipartisanship; he could have sought a bargain like the one Democrats offered him a year ago, in which undocumented immigrants brought to the U.S. as children would get citizenship in exchange for a wall-funding subsidy as large as $25 billion. In the past, he’s repeatedly been talked out of forcing a shutdown, most recently in late September, when White House and Capitol Hill advisers successfully pleaded with him not to insert more drama into the height of the political season and Supreme Court confirmation hearings for Brett Kavanaugh. In December, he nearly allowed himself to be diverted again, tweeting that border security had already improved and “the military” would be building the wall as the Senate unanimously passed wall-free government funding. But after an outcry from the right, Trump reversed himself and finally got the fight he wanted.

Democrats, for their part, tried once before to use a shutdown to force a popular change in immigration policy, but last time they lost their nerve after just a few days. That was before Pelosi was in charge of the House. Now, Democrats believe they already did all the compromising they needed to last year. Pelosi has unified her caucus and Senate Democrats, led by Chuck Schumer, behind her hardball strategy. In an awkward tag-team response to Trump’s address, the two Democrats stood before a row of American flags and argued that Trump was “holding the American people hostage” with a manufactured crisis. If Pelosi’s nerve falters and she cedes ground, she would immediately risk losing the confidence of the fractious caucus she’s labored to control. But if she succeeds in her standoff with Trump, it will be an important moment in Washington, a signal that Congress, which has spent the past two years kowtowing to the President, now has the power to thwart him. That momentum would carry forward into numerous investigations the House is preparing to unleash.

Trump didn’t invent Washington gridlock. Plenty of other moments in his presidency have felt equally do-or-die, only to be subsumed and forgotten amid the next high-stakes crisis. Hours before Trump’s Oval Office address, new evidence emerged of his former campaign chairman’s communications with an aide the FBI has linked to Russian intelligence. At the end of the month, the President, assuming he can afford to fuel up Air Force One, is scheduled to travel to the annual meeting of economic elites in Davos, Switzerland, where he’ll confront the world order he continues to jumble and destabilize, an arguably bigger deal than nine shuttered government departments.

Perhaps it was inevitable that a President whose Administration has been in a state of virtual breakdown since its Inauguration should preside over the government itself grinding to a halt. Trump, true to his tendencies, acts on impulse, prevaricates, shreds norms and takes unilateral actions of questionable legality. He stumbles into authoritarianism, not out of calculation but out of machismo. Meanwhile, the Speaker, true to her tendencies, unites her wayward party behind a carefully chosen, logical course of action, but her best-laid plans may still be no match for an extraordinary moment. Ultimately, it is fitting that Trump, avatar of chaos, should face off against Pelosi, master of rules. And there’s no end in sight for the clash of these two titanic figures. 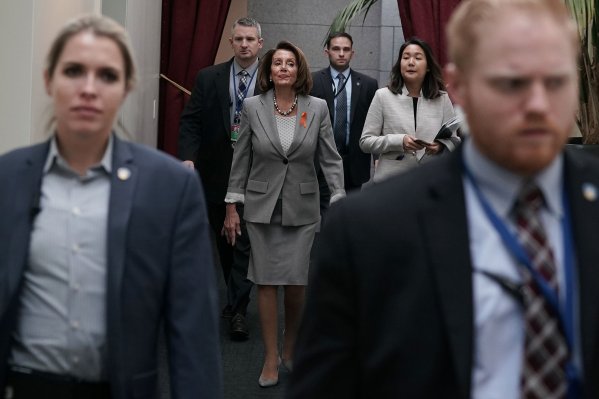 House Democrats Get Ready to Fight Trump. And Each Other
Next Up: Editor's Pick