Illustration by Jason Seiler for TIME
By D.W. Pine

For the Jan. 21, 2018, TIME cover on the showdown between President Trump and Nancy Pelosi’s Democrats, we assigned Chicago-based artist Jason Seiler, a classically trained oil painter who also works digitally, to create an image that could capture this moment in Washington.

It is the second cover Seiler has created for TIME, although the images featured two completely different styles. For the 2013 Person of the Year cover, Seiler painted a beautifully realistic portrait of Pope Francis.

Pope Francis, Person of the Year, on the Dec. 23, 2013, cover of TIME
Cover Credit: PORTRAIT BY JASON SEILER FOR TIME

This week’s cover features Seiler’s well-known caricature style in order to depict the dueling nature of the current climate in Washington—each player armed with his or her own weapon.

As TIME’s Molly Ball writes in her piece, “step back from the sordid details, and you could hardly get a more illustrative tableau of America’s new political reality: a nonfunctioning federal government whose leaders—each insisting the stakes are too high to budge—have retreated to their corners.”

Seiler created the cover with a Wacom Cintiq, a pressure sensitive LCD screen which allows him to draw and paint directly on the screen. He spent more than 50 hours creating this week’s cover on deadline.

Seiler has worked as a character designer on Tim Burton’s “Alice in Wonderland and has been an art instructor for Schoolism.com, the online art school created by Imaginism Studios in Toronto. He recently painted six postal stamps for the USPS Forever Series. Seiler is also the host of an art podcast called Face the Truth, which can be found on iTunes and most other podcast apps. 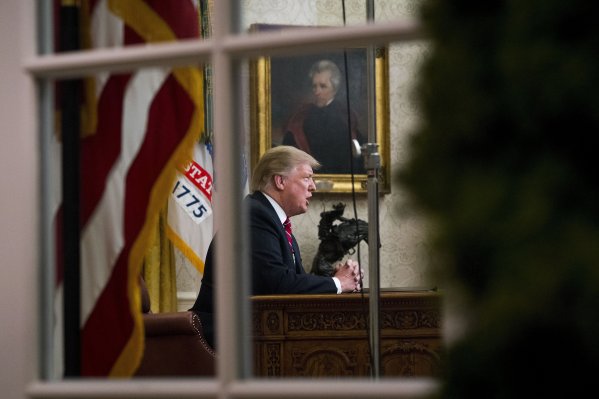 Trump and Pelosi Fight the First of Many Battles to Come
Next Up: Editor's Pick