Google is sharing the work of the 2018 Doodle for Google winner on its US homepage today. Every year for the last ten years, Google have invited students to submit their sketches – this year, entrants were asked to respond to the theme “What inspires me…”

This year’s winner was 2nd grader Sarah Gomez-Lane, whose dinosaur drawings were inspired by her dream of becoming a paleontologist. A green-and-red-striped Tyrannosaurus Rex, some sort of lion-Triceratops hybrid, an oversized egg, a sad-looking Diplodocus, a wildly out of proportion spade and what may or may not be a Stegosaurus were skillfully rendered by Ms. Gomez-Lane in the style of the traditional (but now rarely-seen) Google logo.

For the first time in Doodle for Google’s 10-year history, the winner got to collaborate with the Doodle team to transform their artwork into an animated, interactive experience; the T-Rex can be seen playing a trumpet, while the Diplodocus responds to a click by extending its long neck to graze from a bush that appears magically below.

“We fell in love with Sarah’s rendering of her dinos, and were blown away by her big (you might even say “dino-sized”!) ambitions for her future, especially at her young age,” said a Google press release.

The dinosaurs were wiped out some 65 million years ago when a massive asteroid crashed into what is now the Yucatán Peninsula in Mexico. The force of the blast alone, equivalent to a billion atomic bombs, would have incinerated any living creature, trumpet-playing or not, within hundreds of miles.

Ms. Gomez reportedly received $30,000 toward a college scholarship, and her elementary school in Falls Church, VA will receive $50,000 to spend on IT equipment. 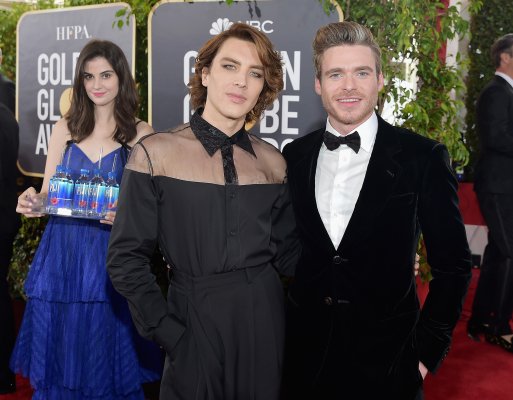 'You’ve Gotta Have Good Face.' Fiji Water Girl Has Spoken About Stealing Scenes and Capturing Hearts
Next Up: Editor's Pick