Four days ago, 18-year-old Rahaf Mohammed Alqunun fled the watchful gaze of her family and boarded a flight to Thailand on a quest to seek asylum. After she was detained by the Thai authorities, the Saudi teen barricaded herself in a hotel room, evaded deportation and wielded social media to publicize her fears that her life was in danger.

Unfolding in live time on Twitter, Alqunun’s plight has served as a high stakes parable of the world’s opaque and often-dysfunctional refugee system. The teenage runaway’s fight for freedom has secured unlikely, global support. It also exposed the geopolitical considerations at play when countries like Thailand must balance obligations to harbor the world’s helpless with the realities of power politics.

For now, Alqunun appears to be safe and to have achieved an interim victory: the U.N. Refugee Agency (UNHCR) has reportedly recommended her for resettlement in Australia, which is now assessing her claim. As the world waits for the resolution of her case, Thailand’s role as an unreliable host for refugees has come into sharp relief.

A regional crossroads for labor and migration, Thailand houses some 106,000 refugees and asylum seekers, according to figures from UNHCR. While the vast majority of this population hails from neighboring, restive Myanmar, some 7,000 of these refugees came from 45 countries. This is in no small part because Thailand offers visa-free entry to dozens of passports, making it an accessible first port of call for people who need an urgent escape from their homeland, refugee advocates told TIME.

Yet because Thailand has not ratified the U.N.’s 1951 Refugee Convention or its 1967 Protocol, the main statues defining protections for refugees, Thai law provides little protection or respite to the vulnerable masses. Refugees are often treated as “illegal immigrants,” and struggle to find housing, work and education.

Thailand has “rapidly lost its reputation for being a safe haven for refugees and asylum seekers,” Andrea Giorgetta, Asia director for the International Federation for Human Rights (FIDH), told TIME. Instead, the Kingdom has become known for its susceptibility to pressure from global powers to return high-profile refugees, bowing either to economic imperatives or promises “to reciprocate the favor and…send back Thai political exiles,” Giorgetta says.

Some who sought a safe haven on Thai soil have suffered refoulement — forcible return to places where they may face persecution — a violation of customary international law.

In 2015, Thailand forcibly returned some 100 Uighur Muslims to China, where the group is persecuted, tortured and arbitrarily detained. Last Nov., Thailand detained a former Bahraini soccer player granted refugee status in Australia while he was on his honeymoon. Pakistani religious minorities, Turkish and Cambodian dissidents, and Chinese activists have also been refouled from Thailand, according to Human Rights Watch (HRW).

“Often times, Thailand has not done the right things in these cases,” says Phil Robertson, HRW’s deputy Asia director. “It’s unfortunate that the [it] has been more willing to fulfill the whims of autocratic governments chasing their people as they try to flee for safety.”

Read more: Inside the Fearful World of China’s Exiled Dissidents

Yet Thailand remains relatively more welcoming than many of its neighbors by simply sporting a UNHCR country office and entertaining asylum requests. Some 2,600 refugees who claimed asylum in Thailand were resettled in 2017, according to the UNHCR. By comparison, Indonesia, a much larger nation, resettled just 781 refugees in the same period.

“Thailand is concerned about their diplomatic relations, their political relations, their economic relations, and their military relations with certain countries,” says Emily Arnold-Fernández, executive director of Asylum Access. “Without an international outcry, there is no kind of competing pressure to encourage Thailand to do the right thing.”

Unlike with, for instance, China, Thailand’s leading exports destination, Saudi has limited leverage, however. Saudi Arabia invested $29.5 million in Thailand in 2017, according to the Bank of Thailand, reflecting barely a drop in the $7.9 billion total foreign investment haul.

On more than one level, Alqunun’s case is an anomaly. Thai officials confiscated her passport and initially sought to deport her, before what observers called an “unheard of” about-face. “It appears that the Thai government has capitulated to the avalanche of media coverage calling for an immediate solution to her situation,” Evan Jones, program coordinator at the Asian Pacific Refugee Rights Network (APRRN), told TIME.

Alqunun’s shrewd use of social media — one of the few tools available to her while barricaded in a hotel room — may have been her saving grace. Her Twitter account, created on Jan. 6, soared to over 109,000 followers and #SaveRahaf was a trending hashtag.

The social media tsunami appears to have dramatically expedited her case. On Wednesday, Australia’s Department of Home Affairs confirmed that it was considering her resettlement request, suggesting that UNHCR verified Alqunun as a legitimate refugee — a process that can take years — in just two days.

The impact wasn’t lost on Saudi Arabia: in a video leaked Tuesday, the Saudi charge d’affaires in Thailand lamented that Alqunun’s passport was confiscated rather than her mobile phone.

But until a final safe haven is confirmed, rights groups warn time is of the essence. Saudi Arabia has continued to exert pressure to have Alqunun returned to her family’s custody, where she fears an honor killing.

“She is still in Thailand and Thailand is not a safe country for her,” says a friend helping manage Alqunun’s Twitter account who asked to be identified by the initials SH. Like Alqunun, she comes from Ha’il province in northwestern Saudi Arabia. She fled two years ago and was granted asylum in Sweden.

“There are a lot of women in Saudi Arabia like us,” who still languish under the country’s repressive male guardianship system, SH says. Most, she added, have not gotten the benefit of the world’s attention. “It was good news for Rahaf that the world listened.” 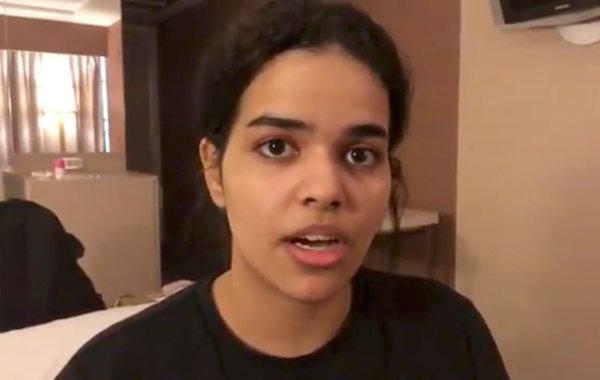 Saudi Woman Will Not Be Deported From Thailand
Next Up: Editor's Pick