Mahershala Ali won big at the Golden Globes awards, walking away with the best supporting actor trophy for his performance in Green Book, and an incredible Bill Murray story, too.

Ali stopped by The Ellen DeGeneres Show on Tuesday and shared a funny story about what happened on and off camera at the awards show. The True Detective star told host Ellen DeGeneres that he was backstage at the Beverly Hills Hotel when he ran into Murray. Ali was celebrating Green Book’s win in the best motion picture (musical or comedy) category with director Peter Farrelly and costars Viggo Mortensen and Linda Cardellini. Murray, who presented at the Globes, wanted to join in the party—even though the stars were doing an on-camera interview at the time.

Murray grabbed a microphone and took over the interview and, as a polite celebrant, brought his own liquor to toast the stars—liquor that he promptly started spilling on their heads. “Bill was toasting us,” Ali told DeGeneres. “Bill toasted his glass on Viggo’s head, Linda’s head, and then toasts on my head and vodka spills all over my face and is running down into my eyes and in my mouth.” Ali is a professional, of course, and even though he had vodka in his eye, which “felt like hot acid rolling down [his] face,” he kept speaking to the camera. “I’m doing the whole interview with an eye closed,” he told DeGeneres.

However Ali didn’t mind the alcohol-infused antics after all, he got a trophy and a good story to tell, saying with a laugh: “Hey, it’s Bill Murray!” 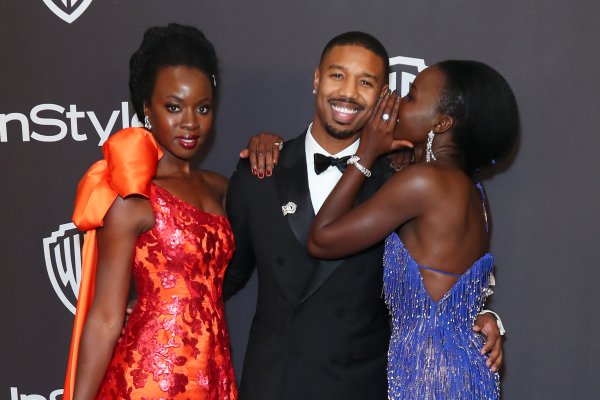 The Moment That Lupita Nyong’o and Michael B. Jordan Got 'Caught' Kissing in Golden Globes Photobooth
Next Up: Editor's Pick