'I Didn't Plan That.' Patricia Arquette Addresses That Awards Speech Curse That Got Bleeped

After sharing a natural speech onstage at the 2019 Golden Globes in Beverly Hills, Escape at Dannemora actress Patricia Arquette issued an apology for her use of a curse word while reflecting on her winning character.

Arquette, who played prison escape accomplice Joyce “Tilly” Mitchell in the Showtime series about a jailbreak in 2015, had to wear fake teeth for the role. So when she won her Golden Globe for lead actress in a limited series for her portrayal of Mitchell at Sunday night’s Globes ceremony, she ended up mentioning the dental detail in her speech.

But backstage speaking to reporters, she had more to say about her off-the-cuff speech, which was censored for viewers at home.

“I didn’t plan that. It was an unplanned F-bomb,” she said, according to Variety. “I’m so sorry. You can’t take it back, can you?” She added that the Globes were “a very elegant occasion.” She also said that she was glad of the chance to play Mitchell, for whom she put on weight as well as changing her teeth. “Diversity is starting to pay off for Hollywood,” she said.

Arquette was not the only Globes winner who had a bleeped section of a speech on Sunday night: she was joined by Christian Bale, Olivia Colman and presenter Steve Carrell. 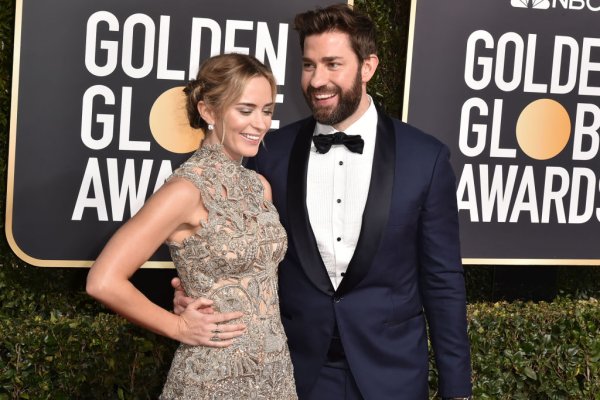 John Krasinski Was Emily Blunt's Biggest Fan at the Golden Globes and This Cheering Meme Is Proof
Next Up: Editor's Pick