Idris Elba is continuing to toy with fans about the prospect of him becoming the next James Bond.

After years of hinting on social media and in interviews, the British actor enlisted current Bond star Daniel Craig to carry on the joke at the 2019 Golden Globe Awards ceremony on Sunday night. The pair snapped a selfie together, making highly uncomfortable expressions, under the caption “Awks…..”. Elba later shared the image from the 76th Golden Globe Awards on Instagram and Twitter.

Speculation that Elba is next in line for the iconic role began back in 2014, when a leaked email appeared to show Sony executive Amy Pascal putting him forward. Since then he has alternately denied, sidestepped and stoked the rumor, apparently having a lot of fun in the process.

In August 2018 he tweeted a blurry image of himself with the phrase, “my name’s Elba, Idris Elba,” evoking 007’s famous greeting and setting of an avalanche of enthusiastic responses from fans.

Elba continues to be a bookmakers‘ favorite to take up the role, which Craig will give up after the franchise’s next installment. 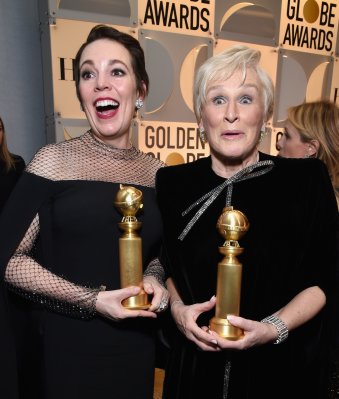 The Internet Has Not Yet Recovered From Glenn Close's Golden Globes Shocked Reaction Face
Next Up: Editor's Pick