The biggest star of the 76th annual Golden Globes red carpet on Sunday wasn’t nominated for an award, nor did she star in a film or television show in 2018. She simply held a tray of Fiji water bottles.

Twitter users were quick to notice the brunette in a deep violet gown, who photobombed several celebrity red carpet photo-ops. The Fiji water girl was seen with Dakota Fanning, Jim Carrey, Cody Fern and Judy Greer, to name a few.

Fiji has been the official water brand of the Golden Globe Awards since 2015. At the 75th Golden Globes, the company teamed up with Matrix Model Staffing to present the bottles on the red carpet in an effort to have Fiji bottles photographed more prominently at the event. Judging by reactions on Twitter, it worked. 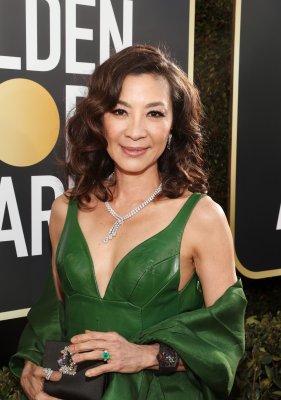 Michelle Yeoh Wore the Actual Emerald Ring From Crazy Rich Asians to the 2019 Golden Globes
Next Up: Editor's Pick