Vice President Mike Pence led the negotiations with top White House officials and congressional aides to re-open the government as the shutdown heads into its third week. There, Democratic sources familiar with the meeting said that the administration “doubled down” on its proposal, which initiated the shutdown on Dec. 22.

“Democratic staff repeatedly urged the Trump Administration and Republicans to reopen the government but were rejected,” one source relayed to TIME.

Sources said Democratic staff warned the administration that it will grow “increasingly hard” to negotiate while the government remains closed.

A Democratic aide familiar with the meeting said that Democrats also requested a formal budget justification to get clarity on the administration’s actual demand, after varying requests have been made.

“The White House has been all over the place on numbers for months,” one source said. “Today was an opportunity for the Administration to come down from an untenable position that cannot pass the Congress. That did not happen.”

Speaker of the House Nancy Pelosi put out a statement on Saturday afternoon, which claimed Democrats would take up immediate action to open up the government in the House.

“Next week, House Democrats will begin passing individual appropriations bills to re-open all government agencies, starting with the appropriations bill that covers the Department of the Treasury and the Internal Revenue Service,” Pelosi’s statement read. “This action is necessary so that the American people can receive their tax refunds on schedule. The certainty of the tax returns of hard-working families should no longer be held hostage to the President’s reckless demands. This bill will then go to the Senate where it has already been passed with overwhelmingly bipartisan support. The senseless uncertainty and chaos of the Trump Shutdown must end, now.”

President Trump verified the lack of progress with a tweet on Saturday, saying there wasn’t “much headway made today.” 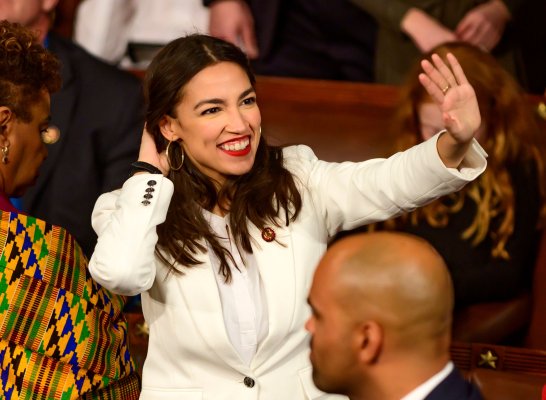 Rep. Ocasio-Cortez Defends Rep. Tlaib's Use of Profanity
Next Up: Editor's Pick