President Donald Trump responded to a freshman congresswoman’s profane remark about impeaching him, saying she “dishonored” herself and her family.

“I thought her comments were disgraceful,” Trump said at a press briefing in the Rose Garden Friday afternoon. “I think she dishonored herself and her family. I thought it was highly disrespectful to the United States of America.”

Michigan Rep. Rashida Tlaib, a new Democratic congresswoman and the first Palesteinian-American woman in Congress, told a crowd of supporters on Thursday that Democrats “gonna impeach the motherf—er” in a video that was posted online.

Trump himself has not been averse to swearing, whether on the campaign trail or as president. Speaking at a rally in Alabama in 2017, for example, he called out NFL players like former San Francisco 49er Colin Kaepernick who take a knee during the national anthem, saying, “Wouldn’t you love to see one of these NFL owners, when somebody disrespects our flag, to say, ‘Get that son of a b—- off the field right now.”

But along with taking issue with Tlaib’s language, Trump also argued that Democrats, newly in control of the House, should not try to impeach him. “You can’t impeach somebody who is doing a great job,” he said, echoing his tweet from Thursday morning.

Trump’s Rose Garden appearance came after a meeting with congressional leadership at the White House as the partial government shutdown nears the two-week mark. 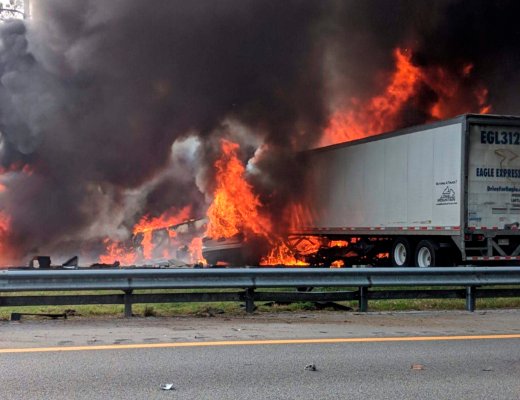 Federal Investigation Into Deadly Florida Crash Delayed Because of Government Shutdown
Next Up: Editor's Pick