The Chinese flag. China hit back against a new U.S. advisory that warns citizens to "exercise increased caution” there when traveling.
Lucas Schifres—Getty Images
By Billy Perrigo

China hit back on Friday against a new U.S. advisory that warns citizens to “exercise increased caution” there when traveling.

Lu Kang, a spokesman for the Chinese Foreign Ministry, said the advice “cannot stand up to scrutiny,” according to the Associated Press.

The Jan. 3 travel advisory, issued by the State Department, warned of the “arbitrary enforcement of local laws” and “special restrictions” on people with dual U.S. and Chinese citizenship. It came days before talks on the U.S.-China trade war were set to start.

The advisory also warned of the “coercive” practice of exit bans, when authorities prevent people from leaving China. The State Department said these practices have been used to force people to cooperate with Chinese government investigations.

Lu, the Chinese spokesman, said that 2.3 million Americans visited China between January and November last year, adding, “I think this figure speaks volumes for the security condition in China.”

However the Chinese government has come under the spotlight for several cases in the last year in which American citizens have been prevented from leaving the country.

Cynthia and Victor Liu, the children of a former executive at a Chinese state-owned bank who is accused of fraud, were prevented from leaving China last year despite being American citizens. They say they are not in contact with their father.

Some prominent figures were also spirited away by authorities in 2018.

In October, the Chinese actress Fan Bingbing reappeared after being missing for three months. Simultaneously, state media reported she had been fined nearly $130 million for tax evasion. And the former Interpol chief, Meng Hongwei, is likely still in Chinese custody after vanishing while on a trip to China from France. He has been accused of taking bribes. His last contact with his wife before vanishing was reportedly an emoji of a knife. 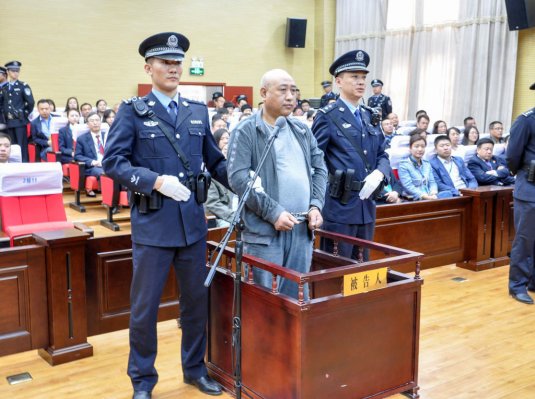 Serial Killer Known as China's 'Jack the Ripper' Executed
Next Up: Editor's Pick