Why You Should Be Happy About China's Historic Moon Landing

It’s hard not to get a patriotic thrill from that—even if it was never technically true. The U.S. is certainly the first—and so far the only—country whose flags on the moon were planted by human hands. But the Soviet Union was the first to get its emblem onto the lunar surface at all, when the Lunik 2 impactor crashed on the moon in 1959, carrying a coin emblazoned with the Soviet flag. It took the U.S. until 1964 to duplicate that feat, and then-Soviet premier Nikita Khrushchev could not resist tweaking the behind-the-curve Americans as they struggled to catch up.

“The Soviet pennant on the moon has been awaiting an American pennant for a long time,” he said to much laughter. “It is starting to become lonesome.”

Ultimately, the Soviet pennant had plenty of company—more than it may have wanted. Both the Soviet Union and the U.S. managed to soft-land spacecraft on the moon, but the U.S. bested that with its astronauts. In 2008, India joined the metal-on-the-moon club, sending an impactor to the surface from its Chandrayaan-1 orbiter. China followed in 2013 with its soft-landed Chang’e-3 lander and rover.

And now, in the first week of a new year, Beijing pulled off a true space first, setting its Chang’e-4 lander and rover on the far side of the moon—a place no machine had ever touched and no camera had ever photographed up close. That accomplishment took some doing, requiring that a communications relay satellite—wonderfully named Queqiao, or Magpie Bridge—be placed in lunar orbit first, since no direct communication with Earth is possible through the intervening bulk of the moon itself.

It is hard to overstate the significance of the mission, both for China’s reputation as a space power and for the advancement of exploration itself. But that didn’t stop at least one academic from trying. “This space mission shows that China has reached the advanced world-class level in deep space exploration,” Zhua Menghua, a professor of science and technology at Macau University, told The New York Times. “We Chinese people have done something that the Americans have dared not try.”

America has indeed never landed on the far side of the moon, but lack of daring was hardly the reason—a claim that’s especially hard to sustain in the same week NASA’s New Horizons probe reconnoitered Ultima Thule, which, at four billion miles away, is the farthest object a spacecraft from Earth has ever visited. The moon, as of the day Chang’e-4 landed, is about 246,400 miles away, or .00616% of New Horizon’s current distance.

Still, China can strut and China should strut and like it or not, we should celebrate what they’ve done. The U.S. wasn’t kidding when it sent the Apollo 11 crew to the moon for the first lunar landing with a plaque that read, in part, “We came in peace for all mankind.” Yes, the crew planted an American flag, and yes, the astronauts had that same flag on the shoulders of their spacesuits. But the world took the U.S. at its word and hailed the American achievement as what it was—a human achievement.

In the run-up to the Apollo 11 landing, White House speechwriter William Safire reflected that idea in a poignant address he wrote that President Nixon would have delivered to the nation if moonwalkers Neil Armstrong and Buzz Aldrin had been marooned on the surface, leaving Michael Collins, who was station-keeping in lunar orbit, to come home alone. “They will be mourned by the people of the world,” Nixon would have said. “They will be mourned by a Mother Earth that dared send two of her sons into the unknown.”

Today, China is the country best positioned to send its sons and daughters into the same lunar unknown—a goal it is aiming to reach as early as the late 2020s—and represent the entire 7.5 billion of us if it does. The Chinese edge is due in large part to the monomaniacally focused way Beijing pursues all of its grand projects, like the 2008 Olympics, the country’s sprawling rail and subway grid, and the global Belt and Road Initiative. A top-down system that exerts complete control of all aspects of the economy and society can pretty much will its great works into existence. “Odds of the next voice transmission from the moon being in Mandarin are high,” said Joan Johnson-Freese, a professor at the U.S. Naval War College, on CNN Thursday.

But China owes a fair bit to Russian and American fecklessness too. Moscow’s new Vostochny Cosmodrome has been delayed for a host of reasons, including funds that keep disappearing into the pockets of corrupt officials, and the general disgruntlement of poorly paid—and even entirely unpaid—construction crews. America’s political dysfunction has long since hamstrung NASA too, with every president since Ronald Reagan making a sharp turn from his predecessor’s policies, leading to forever-shifting goals for crewed exploration—from the International Space Station, to the moon, to an asteroid-redirect mission, to Mars and back to the moon. And then of course there’s the current chatter about a space force, which no one inside or outside Washington can either fully explain or justify.

Paradoxically, however, the Americans’ and Russians’ effective abdication of the lunar high ground could also work to China’s disadvantage. It was the white hot U.S.-Soviet competition to be first to the moon that helped sustain both countries’ space programs in the 1960s, even as critics questioned the dangers and the costs. With China’s economic growth slowing and no such international foil against which to compete, Beijing might have trouble justifying its own space goals—especially if the country faces a tragedy like the accidents that claimed the lives of the Apollo 1 astronauts in 1967 and the Soyuz 1 and Soyuz 11 cosmonauts in 1967 and 1971, respectively.

At the same time, China’s recent success could be just what it takes to rekindle some of the old competition, to focus the American mind on space once again—especially with private players like Elon Musk’s SpaceX and Jeff Bezos’s Blue Origin now in the mix. Ambitious entrepreneurs may not have the money-printing resources that a government has, but they’re generally not hobbled by government bureaucracy or electoral politics either.

One way or another, the moon remains both destination and seduction. China has clearly tumbled for its charms, and if you have any sense of adventure at all, it’s hard not to fall in turn for the country’s latest little moon ship—and for the bigger, more ambitious ones that may follow. Human boots on the moon are better than no boots at all, no matter the flag that comes along for the ride. 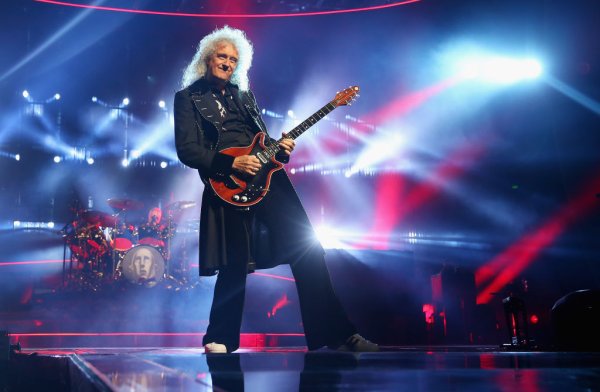 Queen Guitarist (And Astrophysicist) Brian May On His Work With NASA and His New Song About Ultima Thule
Next Up: Editor's Pick