Here Are Some Unexpected Effects of the Government Shutdown

As the partial government shutdown approaches the two-week mark, thousands of federal employees and millions more Americans are feeling the effects.

While many government functions — including the military, the Postal Service, the Department of Veterans Affairs and entitlement programs — are still operating, a quarter of the government lacks funding. This means about 800,000 federal workers across the country are affected, either required to stay home without pay or forced to work without pay during the shutdown.

Americans are likely to notice the shutdown’s consequences across a variety of areas. Here are some of the most notable effects:

Most Internal Revenue Service operations have stopped during the shutdown. The agency planned to keep just one in eight employees working, according to its contingency plan for December. That means it won’t answer taxpayer questions or perform audits until the government opens again.

Tax season doesn’t begin until later in January, so if the shutdown ends soon, there shouldn’t be much of a noticeable effect for most people getting their tax refunds. And people can still submit tax returns even if the government remains shut down.

But if the shutdown continues, it could create larger problems for the IRS. The agency’s contingency plan only outlined what it would do through Dec. 31, so the longer things drag on in January, the more likely it will need to rework its plan.

Many Native American tribes have been hit hard by the government shutdown. When tribes negotiated treaties with the U.S. government decades ago, they often secured government funding for things like health care and education in exchange for land they were giving up. Now, with the government partially shut down, tribes are scrambling for funds to keep services such as food pantries and health clinics open, according to the New York Times.

But the tribes may soon run out of money if the shutdown continues, and they don’t know whether they will be reimbursed once the government is funded again. In the meantime, fewer federal workers being paid can mean that rural communities are trapped by snow in unplowed areas or that tribal citizens who work for the government don’t have salaries to support their families.

The Violence Against Women Act

The Violence Against Women Act expired when the government shut down in December. The law, which helps survivors of sexual assault, domestic violence and stalking, was first passed in 1994. Programs already funded by grants will continue, according to the Washington Post, but the shutdown will delay payment requests for programs funded by VAWA.

A lawsuit against Trump

The government shutdown is actually good legal news for President Donald Trump. His lawyers at the Justice Department, which is affected by the shutdown, asked a federal appeals court to delay a case over foreign payments at Trump’s Washington hotel.

Maryland and Washington, D.C. are suing the President for allegedly violating the Constitution’s emoluments clause, which prohibits federal officials from accepting money or gifts from foreign governments. They claim he is profiting from foreign business at his Washington hotel.

But because the Justice Department is affected by the shutdown, Trump’s lawyers there asked a federal appeals court to postpone all filings in an appeal related to the suit, according to Politico. The 4th U.S. Circuit Court of Appeals agreed to put the case on hold in late December, meaning the President will have more time to file briefs in the case once the government is back up and running.

A number of government agencies that deal with housing and loans have been affected by the shutdown. The Small Business Administration is closed, so it can’t process loan applications that small business owners and startups typically use, USA Today reported.

The Department of Housing and Urban Development is also affected, which means that new housing development grants, loans for new homebuyers and housing quality inspections may all be delayed.

Rural areas won’t see any new rural development loans right now, as the Department of Agriculture announced it would need to cut back on services during the shutdown.

One of the areas where consumers most notice the shutdown is in the country’s national parks. Many parks such as Yellowstone National Park and Arches in Utah have announced they will be entirely or partially closed during the shutdown.

But others have tried to operate with limited staffing or state funds. Several of these parks have been overrun by trash left by visitors over the holiday season. In Yosemite National Park, for example, garbage and human waste has piled up as public restrooms are closed and people are apparently using the ground as a toilet, the Los Angeles Times reported. Joshua Tree National Park in California initially remained open, but the National Park Service closed it on Wednesday after “health and safety concerns” arose over human waste in public areas and other infractions, including driving off roads and damaging resources.

For parks that do remain open, many tell visitors they are entering at their own risk due to lower staffing and resources.

Read More: Meet the ‘Toilet Paper Angels’ Who Clean Up National Parks During the Shutdown

Many museums are also affected by the shutdown. The Smithsonian Institution said on Wednesday that all of its museums would be closed because of the shutdown. This includes the Smithsonian museums outside of Washington, such as the Air and Space Musuem Udvar-Hazy Center in Virginia, and the Cooper-Hewitt National Design Museum and the American Indian Museum Heye Center in New York.

Monuments that are outdoors in Washington D.C. are open, and any privately owned museums or attractions run by the District of Columbia are not affected by the shutdown.

National Zoo and the Panda Cam

The National Zoo is also closed during the shutdown, though the Smithsonian did say that “essential personnel” are working to take care of the animals. The zoo’s treasured live panda cam has also been cut off due to the shutdown. The zoo was open during the first 11 days of the shutdown, according to NBC, but it closed on Tuesday and shut down the panda cam on Wednesday.

The District of Columbia Marriage Bureau is closed because of the government shutdown, BuzzFeed News reports. Congress funds the city’s local court system, and marriage bureau employees were not deemed “essential” so D.C. couples hoping to legally get married during the shutdown may be out of luck. (They could always go to a different state, but to get married in the capital they’d have to wait.)

The local D.C. government can spend its own money to keep other parts of the city going during a shutdown, but the courts and other areas that rely on federal funding are limited. 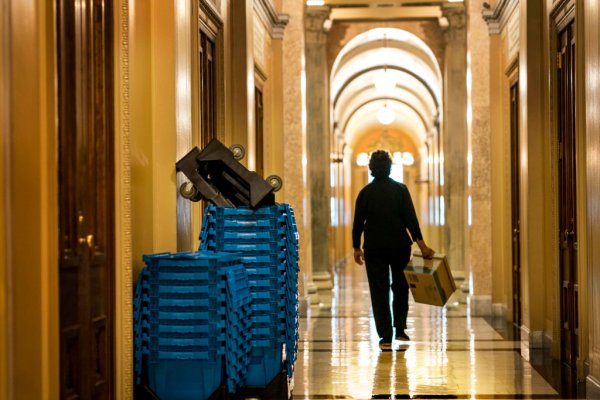 Why President Trump Is Dragging Out the Shutdown
Next Up: Editor's Pick