Why I Have Zero Regrets About My Childless Life

'When I was younger, I tried unsuccessfully to have a baby. I have zero regrets about how things turned out'
Chiara Zarmati for TIME
By Stephanie Zacharek

I’d always wanted babies. Probably. Eventually. Possibly. When I graduated from college, in the early 1980s, friends started having them while I remained happily unencumbered. Even after I married, family planning was more like having no plan, other than putting it off until later. When I reached the age when I was supposed to be desperate to be a mother–early to mid-30s–I didn’t feel desperate; I only felt unsure.

My sole mistake at the time, I see now, was not trusting that I’d be O.K.–maybe even better than O.K.–with or without a baby.

Today, more and more women are choosing not to have children, and while the stigma hasn’t completely lifted, it’s not what it once was. But if the urge to have a child is at least to a degree biological, what does it say about you if you don’t want one? At 57–a childless 57–I still meet young women who wonder why they don’t want a baby more. Should they try to have one anyway? And if they don’t have one, what will their lives be like? The issue is obviously even more fraught for women of childbearing age who are having trouble conceiving and are asking themselves how far they should go with it, how much they want it, if their partner wants it more than they do.

When I was in my mid-30s, my then husband and I did try, and fail, to conceive a child. I’d seen other women who wanted babies so much that they almost seemed to be erasing a part of themselves with their anxiety. Though I would have welcomed a child, their yearning seemed foreign to me. My husband and I considered our options. The invasiveness of IVF troubled us, and we didn’t have that kind of money anyway. So we just decided to stop focusing on having a baby, and a baby never came.

In social situations around that time, when outsiders would nose into what I believe is private business, the fact that I had taken the path of least resistance gave me an easy out. If anyone asked why I didn’t have children, I could simply say that my husband and I had tried and failed. Not only was it the truth, but it sounded less cold than “I didn’t want any.”

And yet even today I rarely volunteer how utterly happy I am with the decision I made more than 20 years ago. Because I never had a child, I don’t really know how to miss the experience of having one. But I do recognize all the things that have come my way as the result of not having kids–and, by extension, being a woman on my own after my marriage broke up: not having children certainly made it less difficult to end the marriage when it became clear that my husband and I had to do so. In some ways, the baby I never had is a part of me. She has given me freedom.

I began my adult life as an almost laughably unambitious journalism graduate, doing proofreading and copyediting and whatever came my way–in fact, doing almost everything I could to avoid writing, because I figured I’d probably fail. But once I started–writing freelance album reviews for 20 bucks a pop–I couldn’t be stopped. By the time I had actually launched any sort of part-time writing career, the do-or-die babymaking years were upon me.

At that point, I realize now, my anxiety was highest–so high that it may very well be the reason I couldn’t conceive. My husband was a freelance writer. I had a full-time job as a magazine copy editor; whatever writing I was doing was happening on the side. People knew we were broke, and still, so many of them said, “Let it happen, you’ll figure it all out later.”

But what would that mean, exactly, when the writing I was doing was already in the margins of my life? I knew women who had babies and careers–of course, it was possible. Maybe I could be one of those superwomen–getting up early, working all day, taking care of the kid before and after day care, confining my writing to the hours after 10 p.m.–but when I looked at this future, I felt depressed in advance.

No matter how helpful my partner promised to be, I knew the bulk of the responsibility often falls to the woman. I also knew that the world didn’t really need extra writers, and I could see myself being too exhausted to put in that additional labor. Who’d really miss my review of the latest REM record? Another, more amazing woman might have gone for it all, but I didn’t feel amazing, not in that way. I had finally found the thing that I loved doing, and now I had to make room for something else–someone else–and that would supposedly make my life complete?

Maybe I knew even then that the idea of completeness is dangerous. I doubt there’s any such thing in a life. By choosing openness over some false idea of completeness, I’ve had more enriching work than I ever imagined. My job–these days, as a movie critic–is immensely satisfying, but it’s that much more so because of the freedom I have. Sometimes I go to festivals simply to cover them–and the ability to just go shouldn’t be underestimated–but I have also been invited to run writing workshops and to serve on juries all over the world.

I occasionally wonder if my not having children has made me open to experience in ways I might not otherwise be. That’s not to suggest that women with children can’t be equally open. But caring for a child demands a specific focus, for years at a stretch. My runway of opportunity was a straight shot, for weeks, months and years. I could say yes to almost anything I wanted to do. Every yes meant I met a new set of people, a new set of friends. And with every yes, my world got a little bigger.

I have never given life to another person. But I’m amazed and grateful, daily, at how much life has come my way even so. I have friends of all ages. I’ve had incredible romances and some concomitant heartbreak. I’ve taken pleasure in watching several of my nieces and nephews start families of their own. And I’m not immune to the desire to care for other living creatures: right after my marriage broke up, I moved to a strange new neighborhood and discovered a minicolony of feral cats in my front yard. They soon became my little outdoor family.

So many accounts of lives without children–lives like mine–are met with reactions like, “How sad! This is all she’s got?” But to paraphrase John Wayne in one of my favorite movies, Howard Hawks’ Rio Bravo, that ain’t all I got, it’s what I got. It’s so hard, when you’re young and most of your life is before you, to make the distinction between what you think you should want, and what you really do want. In my babymaking years, people would say to me, “If you don’t have them, you’ll regret it.” I can’t say I’ve ever felt anything like regret, at least in the sense that they meant. To have no regrets means we experienced everything just as we’d planned, that we made the correct decisions at every juncture. No matter what Edith Piaf tells us, no one gets through life like that.

What I want to say to younger women who believe that a child-free life is an unfulfilled life is that your future self is a person you haven’t met yet. Don’t presume to know everything about her in advance. And don’t presume that you can control every element of your life just by making choices. Because sometimes even the choices you make by default can bring great happiness–just not the sort you envisioned. 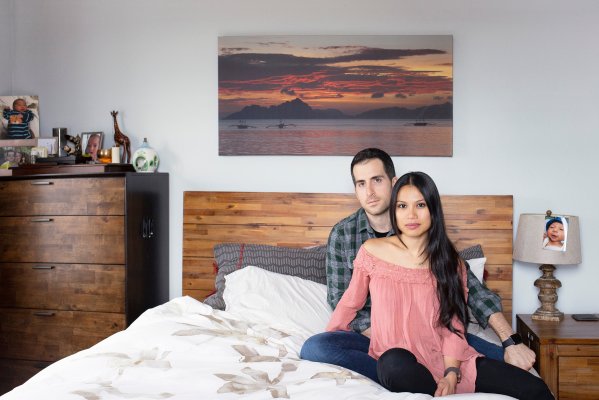 An Experimental Procedure Could Help More Families Have Healthy Babies. But It’s Not Allowed in the U.S.
Next Up: Editor's Pick