It’s the rare person who can call advanced astrophysics and deep space exploration a side hustle. That’s especially so when that person’s main job has been playing lead guitar for one of rock’s most legendary bands. But rare people do exist, and Brian May—that’s Dr. Brian May to you—is one of them. May is best know as part of the foursome that was Queen—whose story is being told in the recently released biopic Bohemian Rhapsody—and as the composer of multiple Queen hits, including “We Will Rock You.”

As the movie reveals, however, May was studying astrophysics at Imperial College in London before detouring into music. A scant 33 years later, he returned to the classroom and completed his doctoral thesis. In that capacity, he became part of the NASA team responsible for New Horizons, the spacecraft that in 2015 reconnoitered Pluto and then, this just past New Year’s Eve, flew by Ultima Thule, a 22-mile long bowling pin-shaped object 4 billion miles from Earth—more distant than any object a human spacecraft has ever explored.

May’s formal part of the mission involves data analysis and stereoscopic imagery. His less formal—but equally compelling—part involved composing a song, straightforwardly called New Horizons, that captures the thrill and the lure of distant exploration. With the spacecraft’s flyby having been successfully completed, May spoke to TIME about his dual careers in such different fields.

TIME: Today’s a busy day for you; it’s not often you send a spacecraft 4 billion miles away. How did you connect with the New Horizons team in the first place?

Brian May: I was introduced to [Project Scientist] Alan [Stern] through friends somewhere in the beginning of 2015. And he invited me to come over and be present at the flyby of Pluto. So I was able to be there and put the first two images together to make the first stereo portrait of Pluto up close. That was a big thrill for me. Then he called me about 6 months ago and said, “is there any chance you can make music for the new flyby?” And I kind of very nervously said “okay, let me think about it.” There’s not a lot of things that rhyme with Ultima Thule. But I went away and thought about it. And what hit me was how inspiring the whole project was from the point of view of the human spirit of adventure. So that’s really what I wrote this song about, as a tribute to the New Horizons team.

TIME: What was it that took you away from astrophysics in the first place—and what brought you back?

May: When I was about to finish my thesis it was just the beginnings of Queen and I had to make that choice. And my choice was made on the assumption that I wasn’t very good at physics and I might be quite good at music. The thesis I had been working on was on zodiacal dust—the dust clouds in the solar system. When I began, it was a hot topic, but in that 30 years it kind of lapsed. What happened very luckily for me, however, people began discovering dust clouds around other suns, in other solar systems. And suddenly my subject became very in-demand again. I started talking about astronomy again to people who said, “why don’t you still do it?” I put everything, and I mean everything, on hold for a year. And they put me in a little office in Imperial College and I got down to it.

TIME: What was it like going from a band of four to a team of more than 100, especially as something of newcomer?

May: I get to hang out with real astronomers, which is great, but I still have that kind of, what do they call it, impostor syndrome. I’m in this plenary meeting with all the New Horizons people, these teams coming together and I keep thinking to myself, “should I really be here? Am I really worthy of being with these guys?” So the music helps. Now I have a reason I can hold my head up and say I played a part in this.

TIME: And yet music and physics aren’t that far apart, are they? Isn’t there an internal order, a mathematics to both of them?

May: You know more and more I find they’re very interlinked. And almost all the people that I’m sitting here with in Maryland, the top level astronomers and navigators and engineers, they all have a similar kind of interest in music. And many of them are musicians. You go back to 1851 Prince Albert’s Exhibition, The Crystal Palace in Kensington Gardens, you know that was The Exhibition of the Works of Man. They didn’t see a distinction between art and science. Someone here was just telling me that when he’s hiring his students he looks for scientists who have music in them because they make the best observers.

TIME: Your legacy was already going to be about music, and now it will include science too. How do you think those two will be weighed over time?

May: I guess We Will Rock You will be on my tombstone, that’s probably unavoidable. Or else Who Wants to Live Forever? I don’t know. The music is my center and I think music is what gave me the gift of everything else. If I hadn’t kind of been able to interact at the top level as a musician then I never would have met the likes of people like Alan Stern. These people are the very pinnacle of their game and they talk to me because they know me because of the music.

May: I would send Imagine, John Lennon’s Imagine. And of my own stuff I would send the new song, New Horizons. It actually did get beamed out to 4 billion miles away, which made me very proud. It’s probably the furthest that music has been consciously sent from this planet. 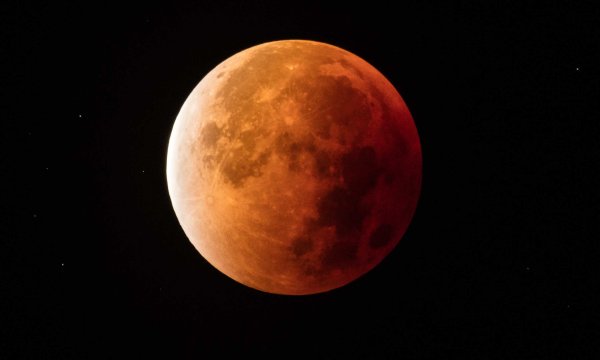 How to Watch the 'Super Blood Wolf Moon' Lunar Eclipse This Weekend
Next Up: Editor's Pick